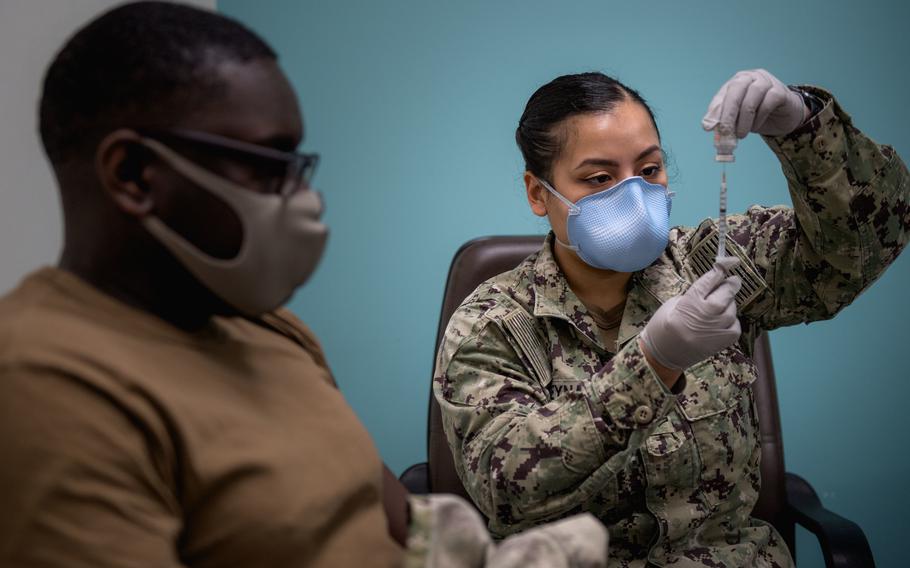 WASHINGTON — About 97.2% of active-duty sailors are at least partially vaccinated against the coronavirus, the Navy said Tuesday, two days after the service’s deadline for the entire force to get the shots.

That percentage is lower than the Navy reported last week. On Nov. 24, the Navy said 99.8% of active-duty sailors had received at least one dose of the vaccine. A week prior, the service reported 99.7% of its active-duty force were partially vaccinated.

“Previous releases reflected a snapshot of data available at that time,” the service said in the statement. “Information released today reflects validated and the most up-to-date information.”

The Navy said the discrepancy could also be attributed to a change in the force structure.

“Changes to military personnel numbers resulted in that slight percent decrease, which account for personnel who were separated, retired or are no longer active duty,” the service said.

The deadline was established after Defense Secretary Lloyd Austin in August ordered all service members to be vaccinated. The Pentagon considers troops fully vaccinated two weeks after their final coronavirus shot.

About 88% of sailors in the Navy Reserve have received at least one shot of the vaccine and 85.6% are fully vaccinated, according to the statement. Those sailors have until Dec. 28 to become fully vaccinated.

“All waiver requests are reviewed on a case-by-case basis and each request will be given full consideration with respect to the facts and circumstances submitted in the request,” the Navy said.

Navy personnel without an exemption will have five days to start receiving their shots before facing separation from the service, according to a Nov. 15 memo from the service. Those troops will receive a general discharge, meaning they could lose some Department of Veterans Affairs benefits, such as tuition funding under the G.I. Bill.

The Pentagon has said mandating the vaccines helps maintain readiness because an unvaccinated force could be rendered undeployable if they catch the coronavirus.

Since the pandemic’s start, 49,546 sailors have contracted the coronavirus, 16 of whom died, according to the service.

Sunday also served as the Marine Corps’ vaccination deadline and about 95% of active-duty Marines and 79% of its Reserve force were at least partially vaccinated, the service said in a statement Monday.

“The Department of the Navy does not normally grant religious accommodations for vaccinations,” the Marine Corps said in its statement.