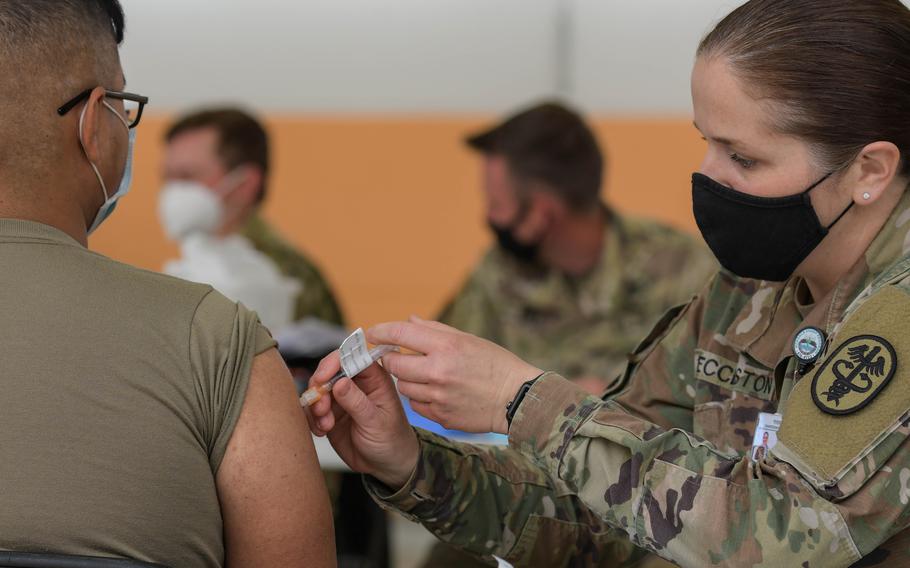 Ninety-two percent of federal employees and military personnel have received at least one dose of coronavirus vaccine, while nearly 5% more have asked for exemptions on religious or medical grounds, the White House said Wednesday.

Among civil servants, vaccination percentages range from 86.1% at the Agriculture Department to 97.8% at the Agency for International Development (AID). Percentages of employees asking for exemptions also vary, from 10.2% at the Department of Veterans Affairs to 1.3% at AID and the State Department.

At the largest federal agency, the Defense Department, 93.4% of military and federal personnel combined have received at least one vaccination dose, while another 5.5% have asked for exemptions.

Figures from the Office of Management and Budget formed the most complete accounting to date of compliance with a requirement that federal employees be fully vaccinated as of Nov. 22, even if they are teleworking full-time. Deadlines for uniformed military personnel vary by service.

Although the vaccination mandates issued by President Joe Biden in September defined "fully vaccinated" as at least two weeks beyond the sole or second shot, depending on the vaccine, the data released Wednesday characterize employees as vaccinated if they have received at least one dose.

Those requesting an exemption also are deemed in compliance with the mandate, as the government decides on their requests. The remaining 3% have not shown they are vaccinated, nor have they asked for an exemption.

While the announcement listed figures for only the two dozen federal departments and largest independent agencies, the White House on Monday said that compliance — counting both vaccinations and requests for exemptions — was 99% in the Executive Office of the President, which includes White House staff, the OMB and other offices related to the White House.

"This week's deadline wasn't an end point. For those employees who are not yet in compliance, agencies are beginning a period of education and counseling, followed by additional enforcement steps, consistent with guidance from the Safer Federal Workforce Task Force and the Office of Personnel Management," the announcement said.

The recommended sequence for those refusing vaccines — unless they have asked for an exemption — is a week of counseling about them and the potential career consequences of not complying with the mandate, then a possible unpaid suspension of under two weeks. Only after that would they face being fired.

"At any point, if an employee gets their first shot or submits an exemption request, agencies will pause further enforcement to give the employee a reasonable amount of time to become fully vaccinated or to process the exemption request," Wednesday's announcement said.

At least one department, Veterans Affairs, the second-largest in the federal government, has started the disciplinary sequence for some employees. VA is ahead of other agencies because it required vaccinations for its medical employees more than a month before Biden issued the wider directive for federal workers.

Veterans Affairs Secretary Denis McDonough said last week that even with the process underway, he was unaware of any decisions to fire employees and said the disciplinary process could "stretch out as much as three months, start to finish."

The process of firing a federal worker typically takes at least a month, since employees have a right to respond and agencies must consider those replies before taking final actions. During that time employees are to keep working, subject to tighter distancing and mask-wearing standards and regular testing when in the workplace.

Federal employees who have pending requests for exemptions are to follow those safety procedures, which also would apply if their request is granted. If the request is denied, the disciplinary process would begin.

Employees with questions and concerns about their legal rights are "knocking down our door," said Andrea Ennis, an associate with the Tully Rinckey law firm, which specializes in federal employment law. That includes some cases in which the agency has asked the employee to explain how a religious belief "guides their daily life," she said in a phone interview.

"With most of the denials, they're being provided an opportunity to provide additional information. If either they don't give that information or the agency says you're denied, then they would start the disciplinary process," she said.

An employee who is denied a request could file an equal-opportunity complaint immediately, but "while they're fighting it, they may end up losing their job due to a disciplinary action," she said, adding that the firm is not yet representing employees with any such complaints.

Several lawsuits are pending against the mandate, including one filed Tuesday by a union representing Federal Bureau of Prisons employees.

"For those who have raised religious or medical reasons that they should remain unvaccinated, we hope the agencies process those requests quickly and provide whatever accommodations are necessary to maintain employee safety in the workplace," Reardon said in a statement. "For the small minority who have not requested an exemption and are still unvaccinated, there is still time for them to change their minds and avoid potential disciplinary action."

The numbers released Wednesday include some 2.2 million federal employees plus uniformed armed forces personnel, around 3.5 million in all. The U.S. Postal Service and its 600,000-plus employees aren't subject to the mandate; a separate mandate for companies with more than 100 employees — which currently is on hold due to a court challenge — would apply to postal workers.

"As we have seen throughout the pandemic, federal employees remain ready to serve — with public health at the forefront," Rep. Gerald Connolly, D-Va., chairman of the House subcommittee on government management, said in a statement. "Civil servants hold positions of public trust and are meeting this moment."