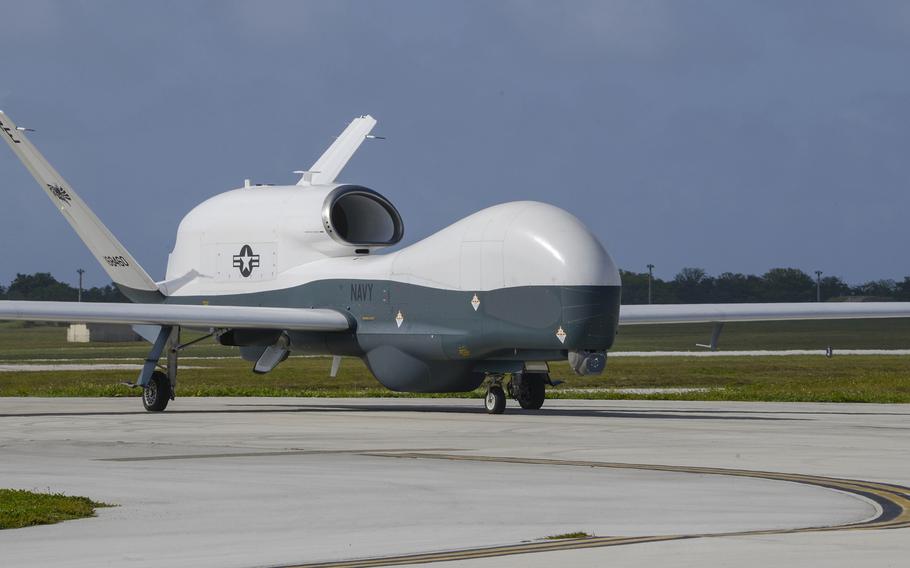 Two Navy unmanned surveillance aircraft are back on Guam after wrapping up their debut deployment to Japan.

The MQ-4C Tritons recently returned to Andersen Air Force Base, according to a news release Wednesday from Indo-Pacific Command. The drones arrived May 15 at Misawa Air Base in northeastern Japan and departed for Guam on Oct. 12, according to an email from U.S. Naval Forces Japan spokeswoman Cmdr. Katie Cerezo on Thursday.

Naval Forces Japan and Misawa Air Base directed all questions about the Tritons’ deployment to Naval Air Systems Command, which did not respond to an email from Stars and Stripes.

Assigned to Unmanned Patrol Squadron 19 at Naval Air Station Jacksonville, Fla., the Tritons were accompanied by approximately 80 personnel, including four pilots. The pilots launch the Tritons before handing control over to Jacksonville.

During its first three months in Misawa, one Triton flew approximately 20 missions, a drone pilot told Stars and Stripes in August.

Similar to the Air Force’s RQ-4 Global Hawks, the Triton is designed for maritime surveillance rather than terrestrial scouting.

“It provides high-resolution, all-weather imagery across large geographic areas, which offers an important capability in support of the Japan-U.S. alliance,” Cerezo said in August.

The aircraft also complement the capabilities of the P-8A Poseidon surveillance planes, according to the Navy.

The Tritons will continue to operate from Andersen to “provide maritime surveillance and persistent intelligence” to the 7th Fleet, according to the Navy.