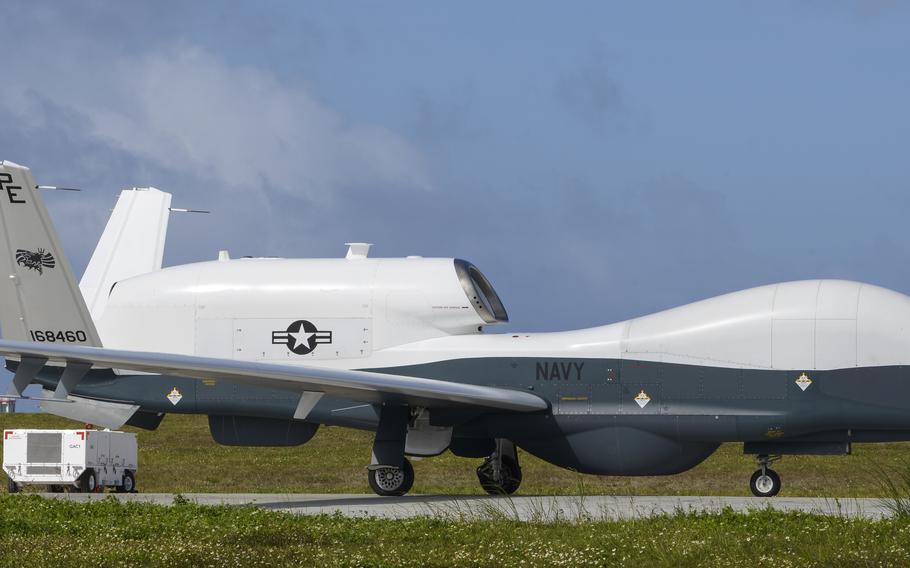 Two Navy MQ-4C Triton surveillance drones have deployed to Misawa Air Base in northeast Japan, where they will operate in support of the U.S.-Japan alliance.

Approximately 80-100 personnel have traveled to Misawa to operate the aircraft, which are on their maiden deployment to Japan, she said in an email Wednesday.

“The Triton is an unmanned, unarmed aerial reconnaissance system with a mission of Intelligence, Surveillance and Reconnaissance,” Cerezo said. “Triton's primary mission is maritime surveillance. It provides high-resolution, all-weather imagery across large geographic areas, which offers an important capability in support of the Japan-U.S. alliance.”

Exactly how long the planes will be in Japan is unclear.

The Navy also did not provide a reason for the deployment.

However, the Tritons’ mission coincides with the deployment of RQ-4 Global Hawk drones to Yokota Air Base, home of U.S. Forces Japan in western Tokyo. U.S. forces have temporarily deployed the Guam-based Global Hawks to Japan each summer since 2014 to avoid typhoons.

Tritons, which the Navy has flown out of Guam since January 2020, are similar to Global Hawks but specialized for maritime surveillance.

The Tritons are in Japan in “the midst of an increasingly severe security environment surrounding the country,” Japan’s Defense Ministry states on its website.

The deployment is “critical to enhance [intelligence surveillance and reconnaissance] activities by both countries,” the website states.