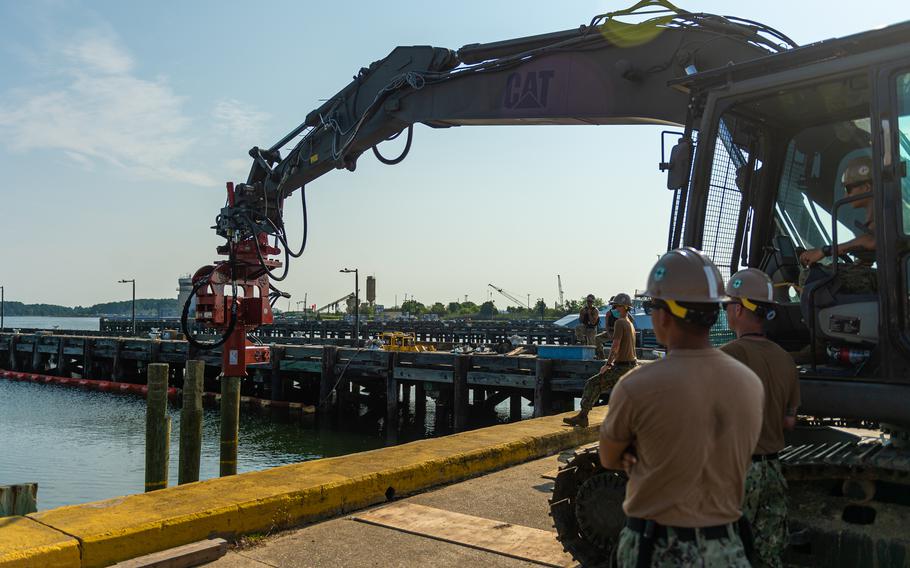 (Tribune News Service) — As tensions rose and the enemy in the Navy’s global Large-Scale Exercise 2021 scenario kept poking at American forces, word came down from the fleet — maybe even the secretary of defense — that hostile forces had abandoned a port.

It was up to sailors from Little Creek’s Navy Expeditionary Combat Command in Virginia Beach, Virginia, to secure it and make it safe — whether for landing supplies or humanitarian relief or as a base for the fleet.

The Large-Scale Exercise is meant to test the Navy’s ability to respond to a fast-moving, worldwide threat from a hostile power. It involves everyone from the newest seamen out of boot-camp on more than two dozen ships to the three- and four-star admirals and generals who command the five fleets and three Marine Expeditionary Forces participating.

Much of what they’re doing, like the repairs that divers were completing on a pier at Little Creek, a day and a half after the call came from fleet to secure the scenario’s simulated port, was familiar, said Chief Petty Officer Carlos Hernandez of Underwater Construction Team One.

What was a bit less so — and what made the exercise such an important one, in his view — was arriving nearby with all the team’s gear on a Landing Craft Utility. That’s the updated version of the vessels that delivered tanks to the beaches of Normandy and countless Pacific islands in World War II, and for Hernandez and his team, it was a chance to work with the combat experts from a Navy Beachmasters unit as it drilled on securing a beach landing site on a hostile shore.

Hernandez and his divers tested some new techniques for repairing piers. One involved a Kevlar sleeve and mortar to bolster failing pilings. The other, a two-legged metal support to carry some of the weight that aging pilings could no longer support.

On the pier, Petty Officer 3rd Class Palacio Jauregui took the weight of the feed line for a hydraulic drill, and stood ready to haul that heavy drill to a new position.

The divers knew what needed work because soon after arriving on the shore the Beachmasters had secured, sailors from a different Little Creek group, Mobile Dive and Salvage Unit Two, had run their underwater drone all around the piers.

Just a few hours into the mission to secure the port, MDSU 2 sailors running that drone spotted something just beyond one of the piers that they didn’t like.

So, for Lt. Jason Burke of UCT 1, assigned to coordinate the work of all the different expeditionary sailors at the simulated port, that meant an early fast decision: to call in yet another team of specialist divers, the team from Explosive Ordnance Disposal Group 2.

They had played a major role disarming IEDs in Afghanistan, but just as the Large-Scale Exercise itself reflects a shift in strategic focus to threats from major military powers, EOD 2′s mission now is shifting to more traditional, maritime work, neutralizing mines and other underwater and shoreline explosives.

MDSU 2′s drone drivers, meanwhile, had found another challenge: a training aid designed to resemble a roughly 40-foot sunken boat that was blocking access to one of the piers. They had to remove it, one way or another.

“The whole idea is to synchronize our work,” said Cmdr. Steven Cabos, of MDSU 2, who had taken an early role planning an initial, but pandemic-postponed version of the Large-Scale Exercise.

So while drilling on removing underwater hazards is old hat to MDSU divers, working side-by-side with other specialist expeditionary sailors is less so. It means working out who does what when, and whether one group’s task could get in the way of another’s, for instance.

Pier side, at Little Creek, the Large-Scale Exercise is a chance to better understand what other sailors can do, and so to coordinate efforts with them to accomplish the larger mission of securing a port, said Rear Adm. Christopher Asselta, the expeditionary combat command’s deputy for Naval Construction Force.

Away from the piers, though, Asselta and other senior commanders need to keep on top of other expeditionary sailors, some of whom are repairing an airfield, others setting up a refueling depot on a North Carolina beach, and still others dredging a channel in another part of the Little Creek base.

Sailors from Explosive Ordnance Disposal Mobile Unit 6, also based at Little Creek, meanwhile, are at sea with the USS Arlington, focusing on mine-clearing.

For Asselta and the admirals still further up the chain of command, Large-Scale Exercise is a way to drill on understanding and responding to the ever-shifting challenges sailors face, as well as the stop-and-go progress that often is a central feature of naval conflict.

It also means drilling on something that may — or may not — be called for by the Large-Scale Exercise: the sudden shift of focus in a global contest that calls for completely new tasks and deployments of force.

“It’s called being agile,” he said.