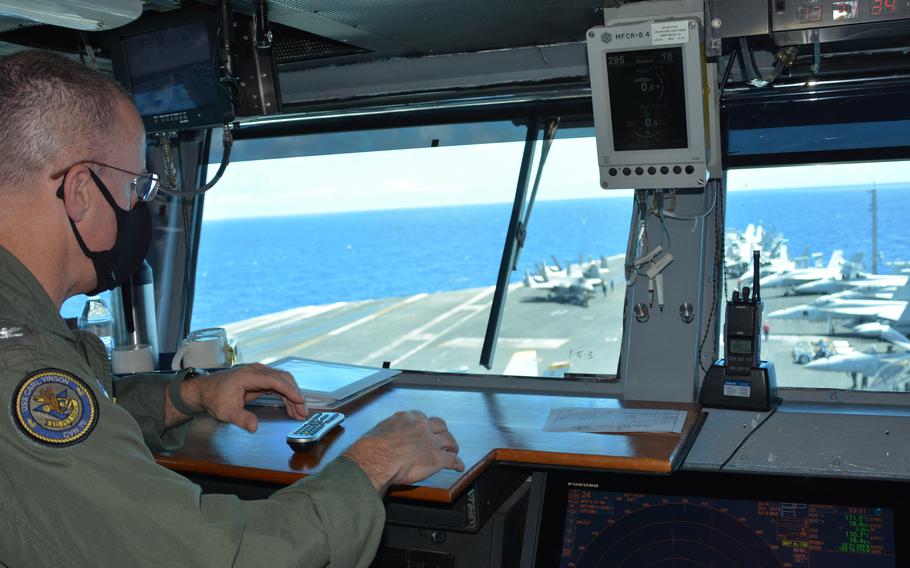 ABOARD THE USS CARL VINSON NEAR HAWAII —The U.S. Navy exhibited the working parts of its Large-Scale Exercise 2021 on Saturday, a display of technology and sea power the Navy’s highest-ranking officer said makes its worldwide fleet too formidable and too diffuse to challenge.

“It’s a big ocean, the Pacific. That’s a lot of battle space,” Adm. Michael Gilday, chief of naval operations, told reporters aboard the aircraft carrier USS Carl Vinson. “So, we want to come at a potential adversary from many different vectors, not just on the sea, but in the air, under the sea, on the land — the Marine Corps — in space and in cyberspace.”

The generic-sounding, worldwide Large-Scale Exercise 2021 crossed all those domains, with live and virtual training, “leveraging everything we have in the toolkit to present a very formidable threat to anybody that might try to hold our interests at risk,” Gilday said.

The exercise started Aug. 3 and concludes Monday. It took place across 17 time zones and involves elements of five numbered fleets — the 2nd, 3rd, 4th, 6th and 7th — within U.S. Fleet Forces Command, U.S. Pacific Fleet and U.S. Naval Forces Europe. About 36 vessels, from carriers to submarines and including the Carl Vinson, are taking part in Large-Scale Exercise 2021.

The Carl Vinson and some of its strike group spearheaded 3rd Fleet’s portion of the exercise near Hawaii. As part of the exercise, the 3rd Fleet command deployed from San Diego to a tent complex at Joint Base Pearl Harbor-Hickam.

Gilday gushed over the virtual core of the exercise — computer-generated scenarios and “enemies” — and its utility. 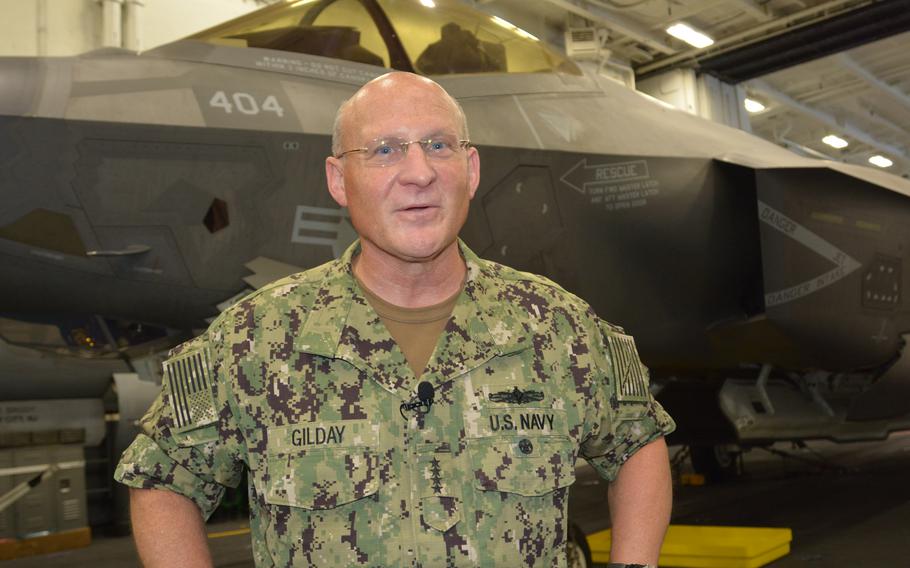 “We can take geography — let’s say geography in Northeast Asia — and superimpose it wherever we want, where we have ships operating,” for example, he said.

“And then we can also add in virtual ships into that same battlespace so it’s a much more robust, much more realistic training for the kind of operations we want to do,” he said.

In the real world, a lengthy upgrade has turned the Carl Vinson into the Navy’s cutting-edge carrier. Its flight deck has been retrofitted to accommodate F-35C Lightning II stealth fighters and CMV-22B Osprey tiltrotor aircraft.

The Navy has dubbed the collection of aircraft on the Carl Vinson as “the air wing of the future.”

Its other embarked aircraft include EA-18G Growlers, F/A-18E and F-18F Super Hornets and the E-20 Advanced Hawkeye. Buy Photo
An F/A-18 Super Hornet takes off from the USS Carl Vinson on Aug. 14, 2021, as the carrier steamed north of Hawaii during Large-Scale Exercise 2021. (Wyatt Olson/Stars and Stripes)

“Deploying with this part of the ‘air wing of the future’ is unprecedented, I would say,” Capt. P. Scott Miller, commander of the Carl Vinson, told reporters Saturday.

“It’s an evolution of what naval aviation is doing,” he said. “From my perspective as the aircraft CO, it’s been fairly seamless, integrating those forces together.”

From his perch above the flight deck, Osborne oversees the launching and retrieval of all aircraft and tracks them up to 10 miles from the carrier. 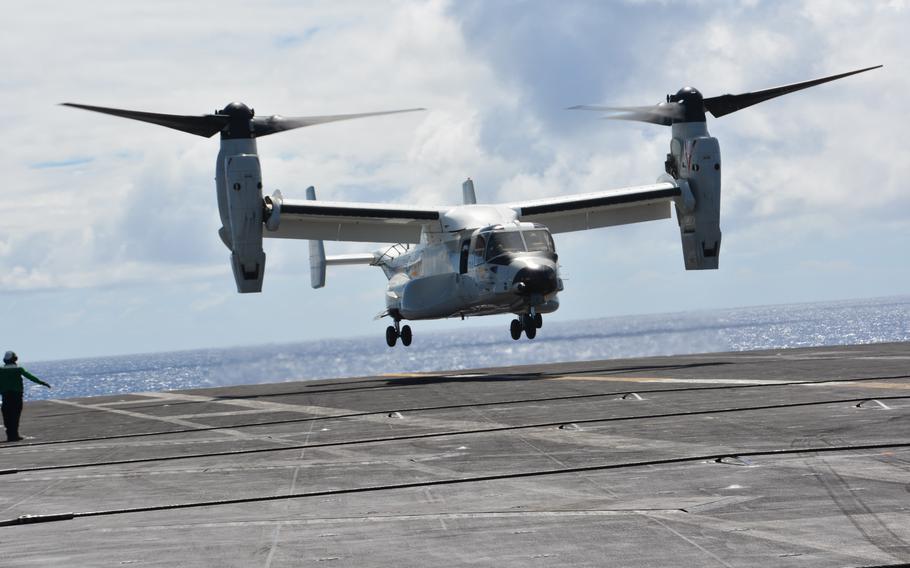 Buy Photo
A tiltrotor CMV-22B Osprey lands on the flight deck of the USS Carl Vinson Aug. 14, 2021, as the carrier steamed north of Hawaii during Large-Scale Exercise 2021. (Wyatt Olson/Stars and Stripes)

The flight tempo has varied during the exercise, from 50 up to 125, he said.

“Today we’re looking at about 105 sorties total,” he said.