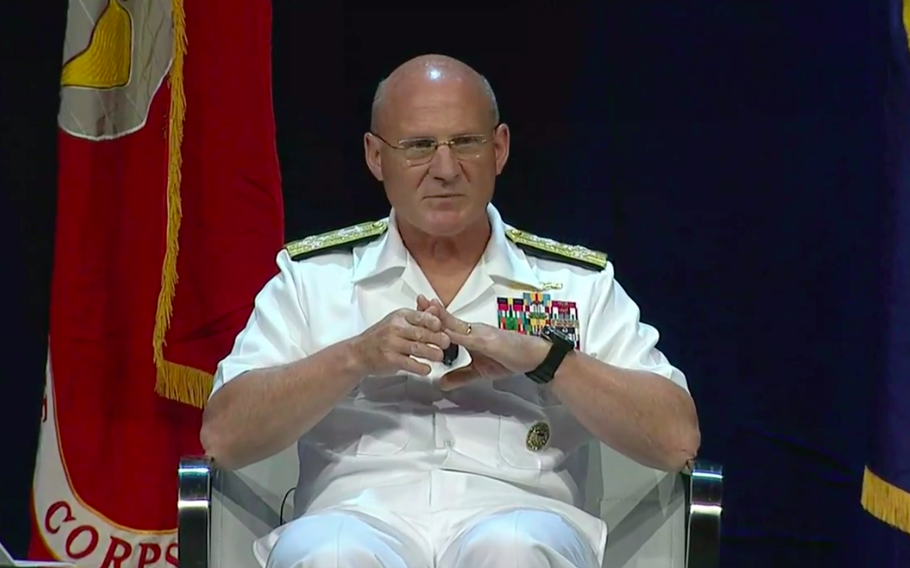 WASHINGTON — Top military commanders on Monday urged defense industry leaders to concentrate on the new weapons and ships that the Navy needs to compete with rival nations such as China and Russia.

Adm. Mike Gilday, chief of naval operations, requested that the defense industry stop lobbying Congress to build equipment the Navy no longer wants and “be a bit more agile in pivoting to new technologies and new platforms.”

“Although it's in industry's best interest … building the ships that you want to build, lagging on repairs to ships and submarines, lobbying Congress to buy aircraft that we don't need … it's not helpful,” the Navy's top officer said Monday at the Navy League’s Sea-Air-Space conference — the first in-person major naval conference since the start of the coronavirus pandemic. “It really isn't in a budget-constrained environment.”

In the proposed 2022 Navy budget, service leaders call for canceling one of two guided-missile destroyers planned for 2022 and speeding the divestment of F/A-18 Hornet fighter jets. Congress has been critical of the plans, proposing to save the second guided-missile destroyer in a House Armed Services Committee markup of the budget on Wednesday and regularly questioning divestments.

The Navy feels a “sense of urgency” against a rising China, and the service has been working to “move the needle in a bureaucracy that’s not really designed to move very fast,” Gilday said. To do so, he said, the service must work with industry leaders.

Army Gen. Mark Milley, chairman of the Joint Chiefs of Staff, said at the conference that adapting to a new “character of war” will require a change in what the military buys — and urged industry leaders to back those needs.

“It isn't about how much money we're spending — it's what we're spending it on, and how it reflects the operating environment of tomorrow,” Milley said. “In the joint force, we have prioritized nuclear modernization, long-range fires, hypersonic technology, artificial intelligence, shipbuilding, microelectronics, space, cyber and 5G as the top-tier technologies we want to fully develop.”

Additionally, unmanned technologies will be highly important in the near future, as “a significant proportion of both sea and air assets probably will be unmanned as early as next decade,” he said.

“By that time frame, up to one-third of our subsurface and surface fleet [will] be unmanned,” Milley said. “Additionally, about 40-60% of future Air Force air wings and squadrons will be robotic pilotless.”

Milley predicted a country that can master those technologies could have a decisive advantage in the next war.

“There are very few things as expensive as preventing a war, but there are two that are more expensive: One is fighting a war, and the most expensive of all is fighting and losing a war,” he said. “Every single cent spent on the U.S. military is an investment to maintain global great-power peace in order to deter war.”