Pentagon budget puts US at risk of Chinese and Russian aggression, experts say 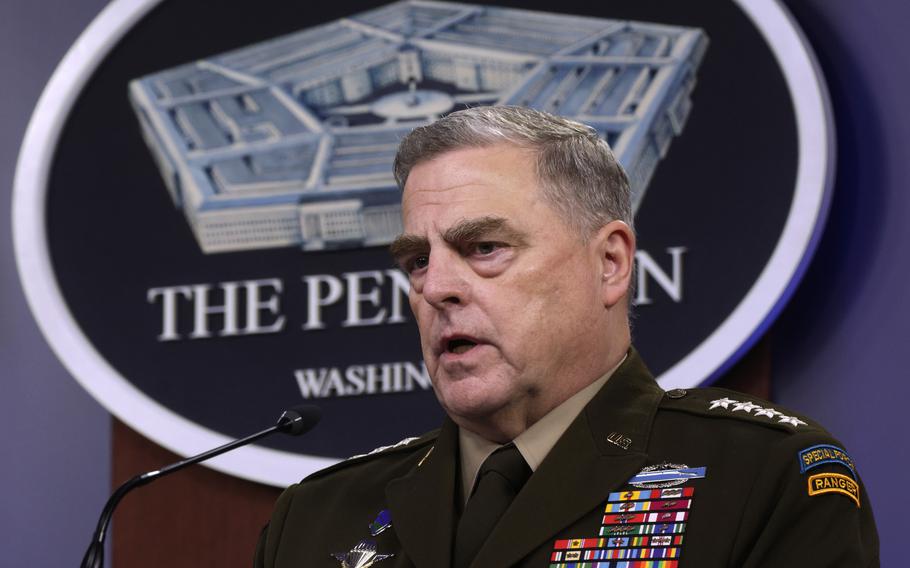 Pentagon leaders including Gen. Mark Milley (pictured), chairman of the Joint Chiefs, have described the Pentagon’s $715 billion fiscal 2022 budget request as biased toward the future, noted Stacie Pettyjohn, director of the Defense Program at the Center for a New American Security. (Alex Wong)

Under-resourcing current national security demands could fail to deter regional ambitions of China and Russia and invite a conflict that the United States is ill-equipped to handle, the experts warned.

Pentagon leaders, including Defense Secretary Lloyd J. Austin III and Gen. Mark Milley, chairman of the Joint Chiefs, have described the Pentagon’s $715 billion fiscal 2022 budget request as biased toward the future, noted Stacie Pettyjohn, director of the Defense Program at the Center for a New American Security.

Within the budget request are indications that the new administration’s national defense strategy, which is under development, might not sufficiently prioritize deterring great power aggression, which requires developing a military capable of defeating a conventional attack and strengthening strategic stability, she said.

“Absent significant changes to the current U.S. force structure, considerable investments in emerging technologies and the development of new operating concepts, the U.S. military could lose a war against a great power like China or Russia,” said Pettyjohn, a specialist in defense strategy and wargaming.

Pettyjohn advocated developing weapons, such as long-range fires missiles, that could make existing assets like ships and planes more effective at countering Chinese and Russian advances.

“You don’t deter wars by hoping that you have the capability to stop [adversaries], you actually need to have the forces to prevent them from achieving their objectives, what we call deterrence by denial,” she said.

Roger Zakheim, director of the Ronald Reagan Presidential Foundation and Institute, espoused Reagan’s peace-through-strength philosophy and urged members to fund the Pentagon as envisioned in 2018 by the Trump administration’s National Defense Strategy. Its proponents called for 3-to-5 percent annual growth year over year. Once inflation is factored in, President Joe Biden’s budget request represents a cut in actual buying power from the last of President Donald Trump’s budgets, he said, repeating a common criticism from GOP lawmakers.

By retiring aging weapons that still have some functionality — known in the defense world as “legacy systems” — the budget might invite aggression from China in Taiwan or Russia in the Baltic states, said Zakheim, a former deputy staff director and general counsel for the House Armed Services Committee who also served on the National Defense Strategy Commission, a panel of experts created by Congress that reviewed and endorsed the 2018 plan.

“We’re exposing ourselves too much in the short term,” Zakheim said.

Mandy Smithberger, director of defense information at the watchdog Project on Government Oversight, also criticized the Pentagon’s blueprint for retiring current assets in favor of developing innovative technologies in the future. By overly committing to immature or unproven technologies, the Pentagon has wasted $46 billion over the past decade that could have been better spent elsewhere, she said.

Smithberger cited the cost overruns and production delays associated with the F-35 fighter jet as a prime example. By the time a critical upgrade had been ironed out, the cost of retrofitting the jets already in the Defense Department’s inventory to fix the problem made defense planners consider abandoning $21 billion worth of the fifth-generation fighters, she said.

“As much as possible, the department and Congress must make sure we fly before we buy,” she said. “While we understand the need to speed up the acquisition process, putting immature and unproven technology into production is costly and undermines readiness. As this committee knows too well, the cost overruns eat into other department priorities, including modernization, and create preventable operational risks.”

The button to infinity

Committee Chairman Adam Smith, D-Wash., pushed back against the notion that the U.S. budget needs to be big enough to ensure that the military can defeat any opponent in any conflict. The military needs to be capable enough (and credible enough) to deter aggression from adversaries, and to make them believe that the cost incurred by instigating a conflict would be too high to make it worth it.

Preparing to win an all-out war against China or Russia seems to be driving the requirements, he said, “and I don’t think there is any fiscal way to guarantee that.”

“Once you set that premise up, once you say China and Russia are terrible, awful and doing all these things, we have to stop them and the only way to stop them is to be prepared to win an all-out war, well then, yeah, you might as well push the button to infinity on how much we spend on defense,” said Smith.

Rep. Ro Khanna, D-Calif., noted that at the height of the Cold War during the Reagan administration, the defense budget peaked at $610 billion in current dollars.

“Do you really believe that we have more national security challenges today than President Reagan confronted in 1985?” he asked Zakheim.

Zakheim replied that today’s national security environment is much more complicated. In 1985, the challenge posed by the Soviet Union was primarily a military issue, whereas China poses an economic threat as well as a military challenge.

“They have the combination of economic power and military power that the Soviet Union did not possess,” Zakheim said.