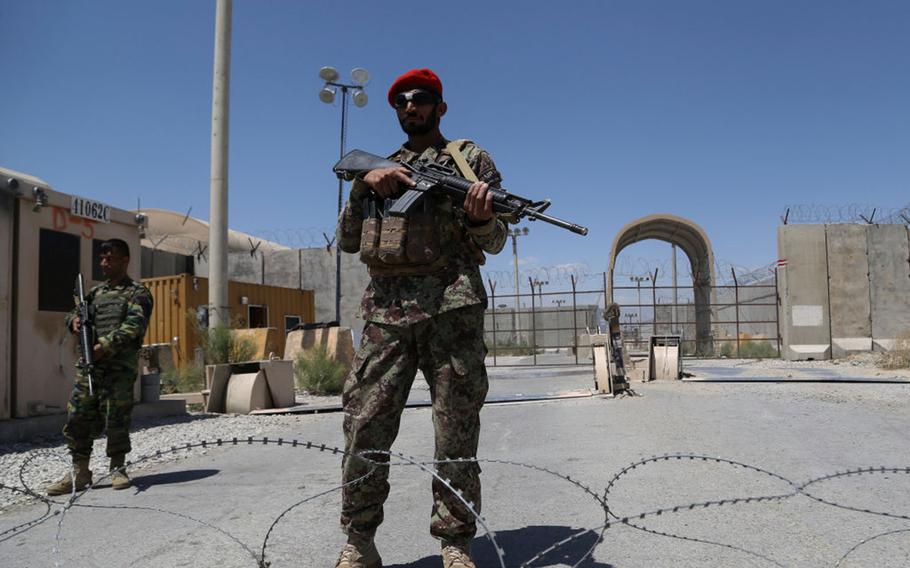 WASHINGTON (Tribune News Service) — House lawmakers charged with setting the Pentagon’s budget are concerned about the fallout from the nearly complete U.S. military withdrawal from Afghanistan, including the implications for U.S. security, for oversight of billions of American dollars and for the safety of thousands of Afghans who aided the U.S. war effort.

In a new report accompanying its draft Pentagon spending bill for fiscal 2022, the House Appropriations Committee expressed concerns about risks to the lives of Afghan people who helped American troops and spies. The lawmakers also stated their worries about the challenges of overseeing billions of additional U.S. funds for Afghanistan’s military and police. And they are unclear, even after getting Pentagon briefings, about the department’s plans for ensuring the war-torn nation will not again become a breeding ground for terrorism.

The committee plans to mark up the $706 billion Defense Department spending bill on Tuesday.

House appropriators in their report wrote they are “concerned with the backlog of current applications” of Afghans who are awaiting special visas to get to the United States.

The measure would provide $25 million for the U.S. military to secure “safe passage” for Afghans who helped the U.S. government in recent years — by working, for example, as interpreters — and whose lives going forward “are under serious threat,” the report said.

President Joe Biden said last week that he is working to ensure Afghans who helped America and who want to get out of the country can do so. But some in Congress and beyond have criticized the administration for what critics call a lack of urgency in addressing the matter.

Biden announced in April that he would end by Sept. 11 the nearly two decades of U.S. deployments to Afghanistan.

The process is all but complete. The Pentagon has already extricated most of the 2,500 or so U.S. service members, plus contractors, who had remained in Afghanistan. A small U.S. military force will stay in the country for the foreseeable future, principally to protect the U.S. Embassy in Kabul.

In recent weeks, Taliban forces have reclaimed large portions of the country’s territory — up to 80 percent, according to the Foundation for Defense of Democracies — raising the specter of a looming civil war or a government collapse hard on the heels of the U.S. departure.

On Monday, the U.S. commander in Afghanistan for the past three years, Army Gen. Austin Miller, relinquished command there, a milestone moment in America’s longest-running war.

McKenzie told reporters traveling with him on Monday that the U.S. relationship with Afghanistan is not going to be the same as a result of the withdrawal.

“It won’t be done like it was done in the past, and we need to be very clear about that,” McKenzie said, according to The Washington Post.

The committee would continue a requirement in law that the Defense secretary must certify to lawmakers, before allocating these funds, that they will go to forces “controlled by a civilian, representative government that is committed to protecting human rights and women’s rights and preventing terrorists and terrorist groups from using the territory of Afghanistan to threaten the security of the United States and its allies.”

Appropriators said they are concerned, too, about how this money will be overseen with American personnel no longer on the ground. They want the Defense secretary to also certify, for the first time, that the funds will be “used for their intended purposes” and will not contribute to “waste, fraud and abuse.”

Moreover, the appropriators stipulated they are not funding any major new projects in Afghanistan and they expect the Afghan government to start paying more of the bills for things such as fuel and other operating expenses going forward.

They also said money for paying army and police personnel must only go to people who are actually enrolled in the forces — a reaction to reports that “ghost soldiers” who were not actually in the ranks were receiving some payments.

The bill also would provide about $20 million to recruit and retain women in the Afghan security forces.

The Biden administration has said it is formulating plans to be able to help the Afghan government militarily if needed from bases outside of Afghanistan. The committee said the Pentagon has briefed it on these plans but the briefings “lack clarity on the scope and cost of future operations.”

The panel would direct the Defense secretary to report back to appropriators in both chambers on “plans to establish over-the-horizon platforms, including the number of United States personnel necessary to carry out these missions; basing agreements and arrangements with host countries; a description of the authorities used to conduct these operations; and costs during the current fiscal year and requested for fiscal year 2022, by program, account, and activity.”

The panel’s report also noted that funding needs for Afghanistan, presumably meaning for Afghan’s military and police and for U.S. forces over the horizon, could change depending on conditions in the country.

They also asked for quarterly Pentagon briefings on the state of Afghanistan’s security.