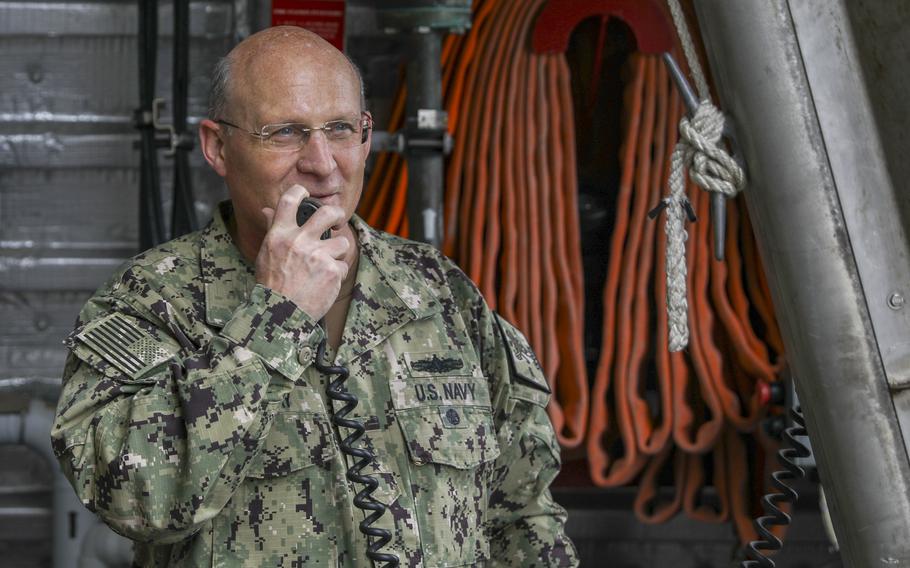 WASHINGTON — Adm. Mike Gilday on Tuesday said there is no plan in the works to reach a 355-ship Navy, but the fleet of the future will be more capable — and lethal — as a result of the service’s investment strategy.

Speaking at a virtual Sea-Air-Space event, Gilday defended the service’s proposed ship cuts in 2022 while arguing the service should focus on quality — not quantity.

“We do have an investment strategy that incrementally gets us to a more capable or a more lethal fleet, but not necessarily a bigger fleet, unless we saw a rise in the top line [of the 2022 budget],” said Gilday, the chief of naval operations.

In the 2018 National Defense Authorization Act, which sets defense priorities and funding for the Pentagon each year, Congress called for the Navy to reach a 355-ship fleet as soon as possible. But the service has taken few steps to begin that process.

“I still think that 355 is a good target, but the reality is that we can't really afford to have a Navy bigger than one that we can sustain,” Gilday said. “Based on our current budget, I believe the analysis shows that we can afford a fleet of about 300 ships.”

Gilday said the “most controversial” decision was cutting the cruisers, though doing so would save about $5 billion in the next 5 years.

He also said cutting the aging cruisers is important to the service’s reliability, as new issues such as the ships’ analog radar systems are “approaching obsolescence” as missiles soar at speeds that evade detection.

“They have difficulty actually seeing the threat based on the speed,” Gilday said.

Another issue is the unpredictability of the aging parts aboard the three-decade-old cruisers, the admiral said, referencing a recent incident when the Navy attempted to deploy a ship “and had to bring it back twice because of because of fuel-tank cracks.”

“It does have an impact on reliability, and we need to be able to provide the secretary of defense and the president reliable assets out there that they can count on to do the nation's business,” Gilday said.

But he said he has hope for the Navy’s near future. Within the next five years, the service should have more Virginia-class submarines and be “on the cusp of delivering” the first Constellation-class frigate and new Flight III guided-missile destroyers.

The Navy is also focusing on weapons development, Gilday said, working on hypersonic missiles that fly five times the speed of sound and “investing in a longer-range weapon, the maritime strike Tomahawk, which gives us range and speed to reach out and touch an adversary.”

“By 2025, we believe if we stay on path that we'll be delivering the Zumwalt class destroyers with a hypersonic missile capability,” Gilday said. “In the air, half of our air wings will have a fourth- and fifth-generation [fighter jet] mix, which analysis has shown to be quite effective against our adversaries.”

But while the Navy works to make the most of its nearly $163.9 billion budget, Gilday warned if the service is not allotted more money in the future, it could have consequences for national security.

“It's going to be a challenge if our top line stays the same or if it decreases,” he said. “If it decreases, I think that we're likely going to see a declining fleet in terms of capacity.”