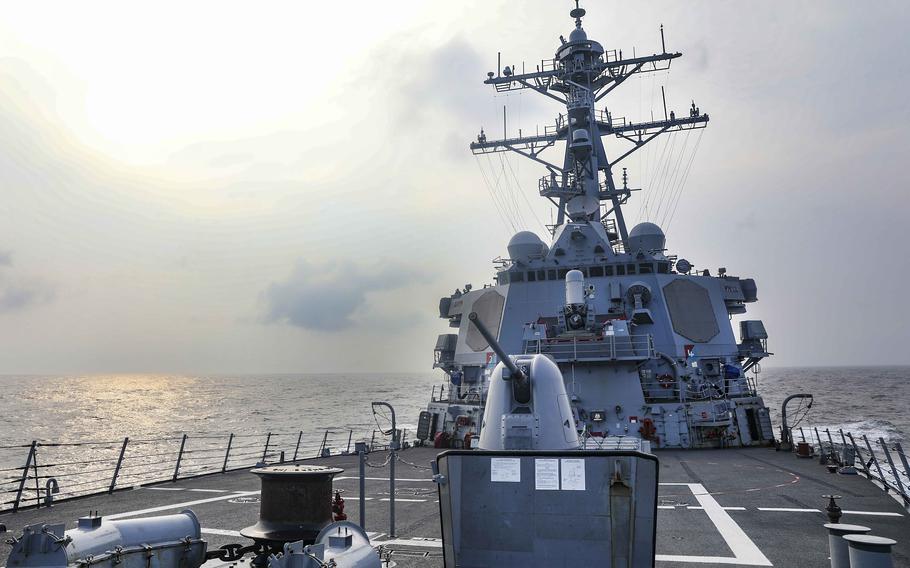 The USS Benfold, a guided-missile destroyer, steams through the Taiwan Strait on Wednesday, July 28, the same day that House lawmakers in Washington, D.C., recommended the Navy build an additional destroyer as part of its proposed 2022 budget. (Navy photo)

WASHINGTON — House lawmakers on Wednesday proposed maintaining the plan to build a second guided-missile destroyer next year after the Navy cut the ship from its 2022 budget request.

The House Armed Services Committee’s subpanel on seapower and projection forces recommended adding an additional destroyer to the Navy’s proposed shipbuilding plans in a budget markup Wednesday of the 2022 National Defense Authorization Act, the law that sets the Pentagon’s spending and priorities for the year.

The proposed budget called for just one new destroyer alongside a guided-missile frigate, two attack submarines, a fleet-replenishment oiler, two towing, salvage and rescue ships and an ocean-surveillance ship.

“[President Joe Biden’s] budget arrived with an unexpected cut in the program of record for one of our core battle force platforms, the DDG 51 destroyer,” said Rep. Joe Courtney, D-Conn., the subcommittee chairman. “In spite of these challenges, we once again have developed a mark that makes an independent assessment of our shipbuilding needs.”

The Navy had previously committed to building two new destroyers in 2022 as part of multiyear contracts with Ingalls Shipbuilding and General Dynamics Bath Iron Works. However, the service proposed canceling one of the scheduled destroyers to save money in its 2022 budget.

The Navy relies on destroyers for some of its key missions such as freedom-of-navigation operations. As House lawmakers worked on the markup Wednesday, the guided-missile destroyer USS Benfold steamed through the Taiwan Strait to challenge China's claims to the waterway.

Navy officials have said the service would need an additional $1.66 billion on top of its proposed $211.7 billion budget to fund the second destroyer.

Canceling one of the contracts would cost the service a $33 million breached-contract penalty for doing so, Adm. Mike Gilday, the chief of naval operations, said June 22 during a Senate Armed Services Committee hearing.

The second destroyer topped the Navy’s unfunded priorities list for the upcoming year. Acting Navy Secretary Thomas Harker during the June 22 hearing called canceling the second destroyer a “very hard choice” necessary to make room for other priorities in the budget, such as research and development.

“While I'm frustrated that this is the second year that Congress has had to restore a major unfunded priority that was unexpectedly removed from the budget, doing so is the right decision for our fleet and for the industrial base,” Courtney said.