One of the Navy's top shipbuilders to hire 3,000 full-time workers amid service's push toward 355-ship fleet

WASHINGTON — Huntington Ingalls Industries, one of the Navy's main shipbuilders, announced plans to hire about 3,000 full-time workers to build ships at its Pascagoula, Miss., shipyards as the service pushes toward its 355-ship fleet goal.

The nation’s largest military shipbuilder is launching the hiring campaign “as part of its future growth plan,” the company's shipbuilding division, Ingalls Shipbuilding, said in a statement issued Wednesday.

“It is vital to our mission that we have a quality workforce with the capacity to fulfill all current and potential naval contractual obligations,” Huntington Ingalls spokeswoman Kianna Mitchell said Thursday. “As we continue to execute on our significant backlog, account for normal attrition and enter into new contracts in the coming years, we will continue to bring new shipbuilders to our team.”

In February, the company had a backlog of shipbuilding projects worth $46.5 billion to complete in 10 years, The Virginian-Pilot reported at the time.

Since then, Ingalls Shipbuilding has won more than $3.6 billion in new Navy contracts for work including advance procurement of a yet-to-be-named America-class amphibious assault ship and the refueling and overhaul of the aircraft carrier USS John C. Stennis, according to its website.

It is also the only American designer, builder and refueler of nuclear-powered aircraft carriers and one of just two shipyards that can design and build nuclear-powered submarines, according to the company's website.

The move comes as the Navy works to increase its fleet by nearly 60 ships to reach its congressionally mandated goal of a 355-ship fleet. Congress in the 2018 National Defense Authorization Act, which sets annual spending and policy priorities for the Pentagon, ordered the service to work toward 355-ship goal “as soon as possible.”

However, the Navy’s proposed 2022 budget asks for just eight new ships — an amount not enough to help the service reach its goal, Rear Adm. John Gumbleton, deputy assistant secretary of the Navy for budget, has recently said.

The company did not specify whether the hiring campaign was directly linked to the Navy's promised growth, but the initiative aims to "attract the talent we need to build ships that protect and defend our nation,” the company’s Vice President of Human Resources and Administration Edmond Hughes said in the statement.

Ingalls Shipbuilding’s acquisition team held a hiring event in Pascagoula on Thursday to help find candidates for the 3,000 positions after recruiting trips across Mississippi, Alabama and Louisiana. Once hired, the shipbuilders will join the more than 41,000 Huntington Ingalls employees, according to the statement.

“Workforce development is critical to the sustainment of a strong talent pipeline,” Ingalls Shipbuilding Vice President of Operations George S. Jones said in the statement. “We maintain longstanding partnerships with local schools and community stakeholders to make training opportunities readily available to those who want to start their career in shipbuilding at Ingalls.”

The hiring campaign also comes as Congress mulls the Supplying Help to Infrastructure in Ports, Yards and America’s Repair Docks Act of 2021, or SHIPYARD Act, which would provide $4 billion to private shipyards such as Huntington Ingalls and another $21 billion to the Navy’s aging public shipyards for infrastructure improvements during a 20-year period. 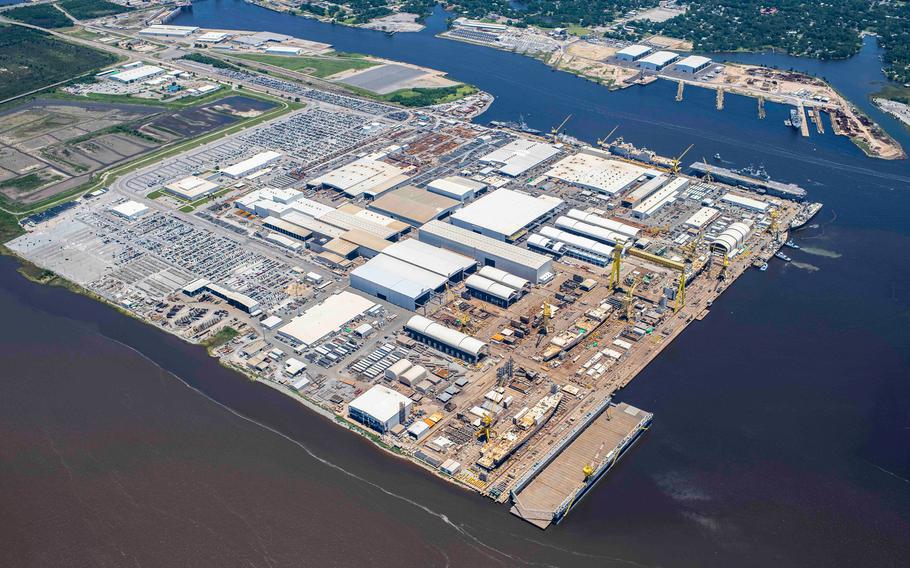 Ingalls Shipbuilding in Pascagoula, Mississippi, has been awarded a contract with a potential total value of $724 million for planning yard services in support of in-service amphibious ships. (Huntington Ingalls Industries Facebook)
Caitlin Doornbos