3 active-duty Marines arrested for participating in Jan. 6 riot at the US Capitol 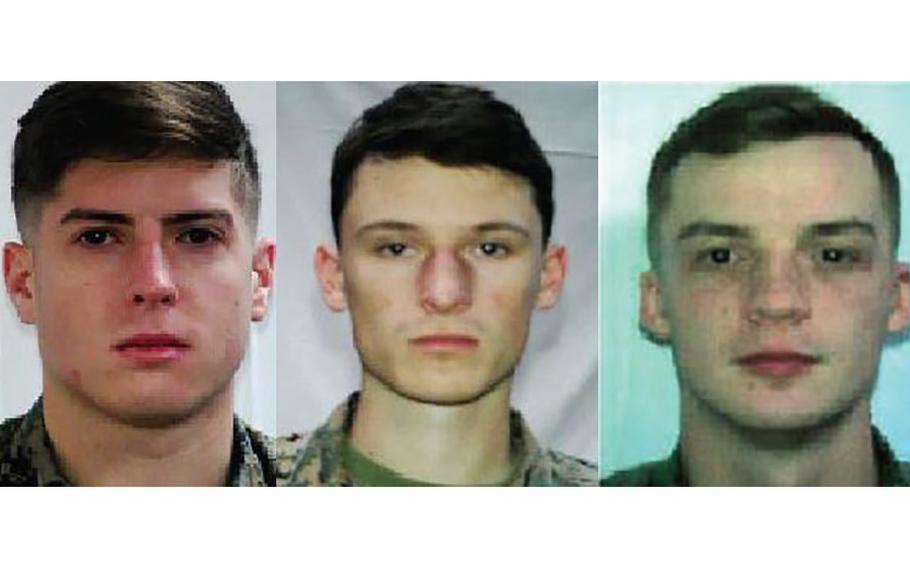 Three active-duty Marines — Sgt. Dodge Dale Hellonen, Cpl. Micah Coomer and Sgt. Joshua Abate — were arrested this week on charges they illegally entered the U.S. Capitol during the Jan. 6 riot more than two years ago, according to federal court documents. (U.S. District Court for the District of Columbia)

Three active-duty Marines were arrested this week on charges they illegally entered the U.S. Capitol during the Jan. 6 riot more than two years ago with a throng of then-President Donald Trump’s supporters, according to federal court documents.

The Marines — Sgt. Joshua Abate, Sgt. Dodge Dale Hellonen and Cpl. Micah Coomer — spent about an hour inside the U.S. Capitol on Jan. 6, 2021, as the mob sought to halt certification of Joe Biden’s presidential victory by Congress, according to the court documents dated Jan. 17. The three Marines face four misdemeanor charges each — two counts of disorderly conduct, one count of knowingly entering a restricted building, and one count of parading, demonstrating or picketing in the Capitol.

Abate admitted last year during a security clearance interview that he entered the Capitol during the riot with two “buddies,” according to the court documents. He told the interviewers that “he heard how the event was being portrayed negatively and decided that he should not tell anybody about going into the U.S. Capitol Building,” according to the documents.

A Marine spokesperson said the service was “aware of an investigation and the allegations” against Abate, Hellonen and Coomer and confirmed all three remained on active duty at three different locations in the United States. All three work in intelligence-related fields, according to their military records.

“The Marine Corps is fully cooperating with the appropriate authorities in support of the investigation,” the spokesperson said in a statement.

Military records show Abate is a special communications signals analyst assigned to the Marine Corps Cryptologic Support Battalion at Fort Meade, Md., which is involved in intelligence gathering. He enlisted in the Marine Corps in July 2018.

Coomer is an intelligence, surveillance and reconnaissance systems engineer assigned to the 1st Radio Battalion, I Marine Expeditionary Force Information Group at Camp Pendleton, Calif., according to his military records. Coomer enlisted in the Marines in September 2018.

Hellonen works as a special communications signals analyst with the 3rd Marine Raider Support Battalion, a special operations unit at Camp Lejeune, N.C., according to his military records. He enlisted in August 2017.

The court documents include images uploaded to social media and surveillance footage showing the three Marines inside the Capitol during the insurrection. Investigators said the three spent most of the 52 minutes they were inside the Capitol in its Rotunda, and footage shows they at one point placed a “red MAGA hat on one of the statues to take photos with it.” Hellonen carried a “yellow ‘Don’t Tread on Me’ flag” during the incident.

Coomer, in his private social media messages, told others that he believed the 2020 president election had been rigged against Trump. In January 2021, he told an unidentified social media user in another private message that "everything in this country is corrupt,” and it needed “a fresh restart.”

“I'm waiting for the boogaloo," Coomer wrote in a private message that investigators included in the court documents. He later added a boogaloo — a loosely organized far-right, anti-government movement that supports political violence — referred to “Civil War 2.”

The three Marines are the latest among nearly 1,000 people charged for their roles in the Jan. 6 riot. At least 118 of those charged in the incident have some kind of military background, according to the George Washington University's Project on Extremism, which is tracking defendants’ court cases.

Only one other known active-duty service member has been charged for participating in the riot. A federal grand jury indicted Marine Maj. Christopher Warnagiris in June 2021 on multiple charges, including felony assault of a police officer during the insurrection. Warnagiris’ case is pending, and he has pleaded not guilty to all charges, according to court records.