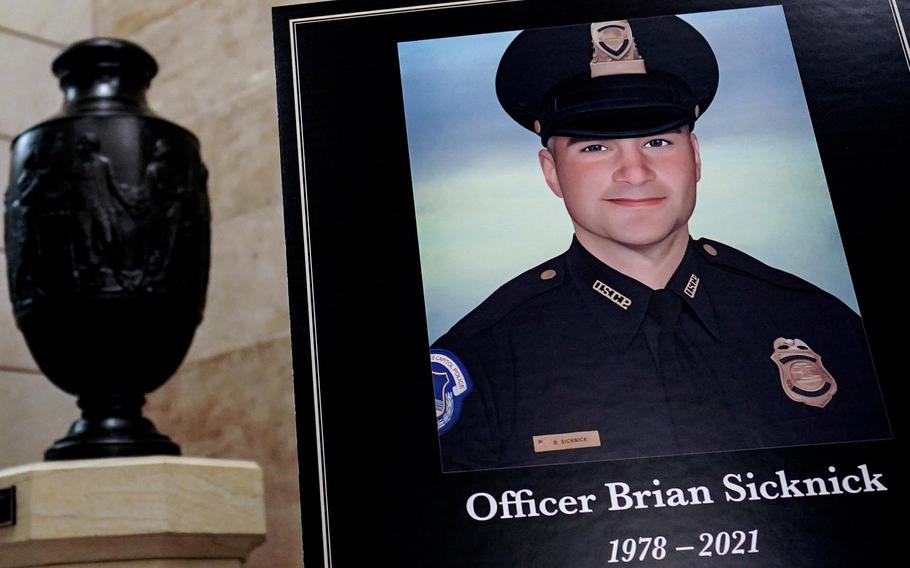 A sign just outside the Rotunda memorializes U.S. Capitol Police Officer Brian D. Sicknick, 42. Officer Sicknick was responding to the riot at the U.S. Capitol on Wednesday, Jan. 6, 2021, when he was fatally injured while physically engaging with the mob. Members of Congress will pay tribute to the officer on Wednesday morning before his burial at Arlington National Cemetery. (Salwan Georges/The Washington Post)

The girlfriend of U.S. Capitol Police Officer Brian Sicknick, who died after being assaulted in the Jan. 6, 2021, attack on the U.S. Capitol, filed a civil lawsuit Thursday against former president Donald Trump and two men who pleaded guilty to the assault.

Sandra Garza, on behalf of Sicknick's estate, said in the suit filed in U.S. District Court in Washington that Trump and the two men — Julian Elie Khater and George Pierre Tanios — used "a campaign of lies and incendiary rhetoric that led to the ransacking of the U.S. Capitol."

Khater and Tanios await sentencing for the chemical-spray attacks on Sicknick and two other officers on the West Terrace of the Capitol.

In a plea deal with federal prosecutors, Khater, a smoothie-shop owner in State College, Pa., admitted to assaulting and injuring law enforcement officers with a dangerous weapon for use of the bear spray.

The suit alleges one claim of wrongful death and conspiracy to violate Sicknick's civil rights, and negligence against all three men. Khater and Tanios are named as defendants for one claim of common law assault, the filing states.

A phone call and an email to two Trump spokespeople were not immediately returned Thursday night.