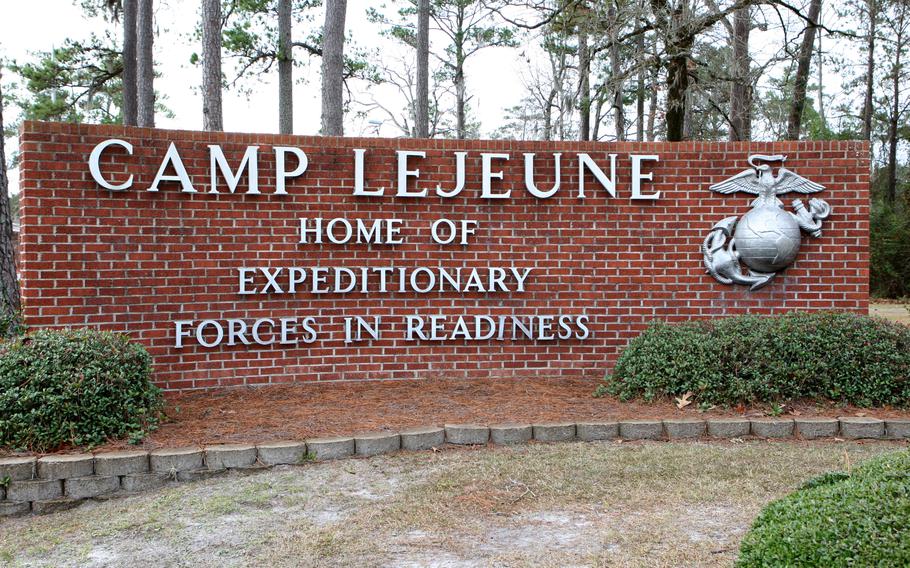 A welcome sign outside of the Holcomb Gate on Marine Corps Base Camp Lejeune, North Carolina. (U.S. Marine Corps)

WASHINGTON — The first payments to Marines sickened by toxic water at Camp Lejeune are set to begin in January and senators are racing to ensure the compensation does not unfairly enrich attorneys.

Sen. Dan Sullivan, R-Alaska, and Senate Majority Whip Dick Durbin, D-Ill., are haggling over legislation that would cap fees that lawyers can charge when representing victims harmed by contaminants at the Marine Corps base in North Carolina decades ago.

More than 14,000 claims have been filed in the U.S. District Court for the Eastern District of North Carolina since the PACT Act was signed into law in August. The legislation expanded health care benefits for veterans exposed to toxic substances and allowed civil suits against the government for Camp Lejeune-linked illnesses.

Law firms unleashed an aggressive advertising campaign for their legal services in the aftermath, targeting veterans and military families who served or lived at the camp between August 1953 and December 1987. The ads urge potential victims to call lawyers to see if they are eligible for financial compensation.

The Department of Veterans Affairs estimated last month that trial lawyers have poured more than $1 billion into advertising, Sullivan said. He has described many of the ads as scams and he said Congress needs to immediately pass legislation limiting how much lawyers can collect from damages awarded by the government.

“I don’t blame Marines for dialing these 1-800 numbers, they’re getting bombarded. They’re sick, they think they’re going to get cured,” said Sullivan, a colonel in the Marine Corps Reserve. “The problem right now is if a Marine calls one of these numbers, there is no limitation on what the trial lawyer representing the Marine can take on the Marine’s award, no cap on contingency fees, no cap on anything.”

The omission of caps from the PACT Act has opened the door for Marines to get crumbs and trial attorneys to get rich, Sullivan argued Thursday on the Senate floor. He said there are reports of some law firms charging 50% or 60% contingency fees, which are sums of money an attorney receives if a case is won.

Camp Lejeune victims have two avenues for recovering money: they can either file a claim with the Navy or if that is rejected, pursue a lawsuit in North Carolina federal court.

Durbin argued Thursday that no competent attorney would work for the 2% and 10% fee limitations floated by Sullivan. He said the Democrats’ figures were much more in line with ordinary practice as well as federal tort claims law.

“You’re doing the veterans no favor by saying that they can’t pay more than 2% contingency,” Durbin said. “I’m sorry to say you won’t find a lot of good lawyers at a 2% contingency fee, that’s just the reality.”

Sullivan attempted to attach his proposal, endorsed by 13 other Senate Republicans, as an amendment to the 2023 National Defense Authorization Act this week but pulled it from a vote on Thursday. He vowed to go back to the negotiating table with Durbin to hash out an agreement before the end of the year.

The Senate will not reconvene until late January after leaving for recess next week, leaving a small window of opportunity for action.

“This is an urgent issue,” Sullivan said. “Payments under the Camp Lejeune Justice Act will start early next year. Ads are likely to intensify over the holidays to try to ensnare more Marines into these schemes.”

Durbin said his offer to Sullivan also includes ensuring victims are paid before lawyers and pointed to another pending Senate bill that would hold unaccredited groups trying to rip off veterans criminally liable.

“We both feel intensely about our point of view but we share one common value: we want these Marines to be compensated,” Durbin said.