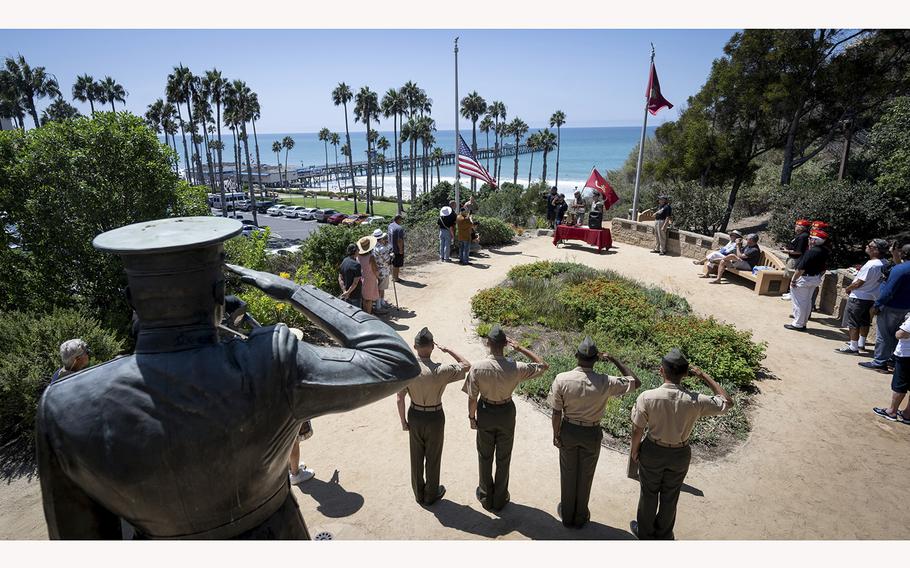 Marines salute as the American flag is lowered to half staff during a remembrance service at Park Semper Fi in San Clemente, CA on Friday, August 26, 2022. The event honored the 13 service members who were killed in a bombing at the Kabul, Afghanistan airport a year earlier during the U.S. withdraw. (Paul Bersebach, Orange County Register/SCNG/TNS)

(Tribune News Service) — Most of them were based at Camp Pendleton, but they came from all over America, from small towns and suburbs. And that’s where the sorrow and the pride linger, one year later.

The 13 U.S. service members killed in the Kabul airport bombing are being remembered with memorials of various kinds — charity foundations, renamed streets, a mural — in places like Rancho Cucamonga, Berlin Heights, Ohio, and Lawrence, Mass. From sea to shining sea.

The explosion on Aug. 26, 2021, was a disastrous punctuation mark on two weeks of chaos that unfolded as the U.S. withdrew from Afghanistan after 20 years of war. An estimated 170 Afghans, gathered at the airport in hopes of fleeing the resurgent Taliban, died in the suicide bombing, too. Some four-dozen U.S. service members were injured.

There was an outpouring of grief in the immediate aftermath — piles of flowers left outside the main gate at Camp Pendleton, social media posts from elected officials, crowds of people standing on street corners to salute hearses carrying flag-draped coffins.

Anger came, too, fingers pointed at military commanders and at President Joe Biden, who had promised a “safe and orderly” exit after inheriting from his predecessor an agreement that the U.S. would leave Afghanistan.

Those initial passions faded for most Americans, but not for the families of the slain. The loss still shadows their days, some more than others.

Rylee McCollum’s widow, Gigi, had a baby three weeks after the bombing, an 8 pound, 10 ounce girl named Levi who will grow up now without ever knowing her father.

Kareem Nikoui’s mother, Shana Chappell, has had her grief compounded by the death of another son. Dakota Halverson, 28, killed himself on Aug. 9 in Norco near a memorial garden that honors his brother.

“He just wanted to be with him again,” Chappell wrote on Facebook.

Dylan Merola’s mom, Cheryl Rex, is experiencing a different kind of deja vu. After the bombing, another son, Branden, joined the Marines. He finished boot camp earlier this month.

Many of the family members regularly seek graveside solace, hoping for comfort in the knowledge that their loved ones died while part of an effort that helped some 125,000 people escape Afghanistan as the government there collapsed.

“It’s surreal to see your kid’s name on a headstone,” Sue Schmitz told the St. Louis Post Dispatch in March as she visited Jefferson Barracks National Cemetery, where her son Jared Schmitz, is buried.

She sometimes sits there for hours, listening to a playlist he made of favorite songs and plucking blades of grass one at a time to toss into the air.

“You never get used to it,” she said.

Eleven of the fallen were Marines, nine of them from the same company in the 2nd Battalion, 1st Regiment based at Camp Pendleton. Another was a Navy corpsman assigned to the Marines.

They were among nearly 6,000 U.S. troops rushed to Hamid Karzai International Airport in Kabul after the capital fell to the Taliban in mid-August last year. For about two weeks, they helped control the crowd, searched those cleared for evacuation, assisted children separated from their parents in the mayhem.

In phone calls and text messages to relatives back home, some of the Marines talked about the desperation they saw in the faces of those trying to flee. They said they believed they were making a difference.

On the day of the bombing, the Abbey Gate was swarming with people. Sgt. Johanny Rosario Pichardo waded into the crowd to help screen women and children. Her final words, as relayed later by her commanding officer: “They need me, sir.”

The suicide bomber’s vest was packed with ball bearings that tore through bodies like bullets. 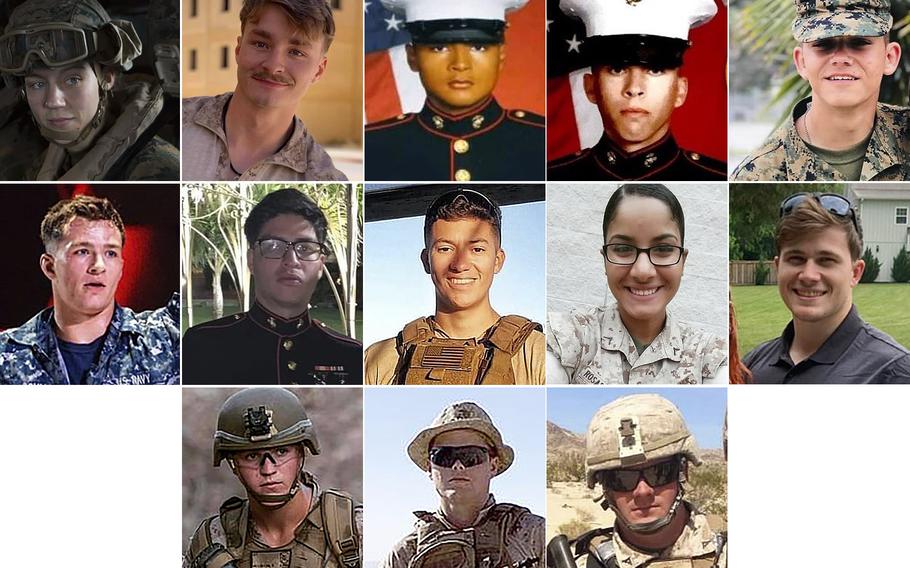 In the weeks that followed, somber tributes unfolded from coast to coast. “They were part of the bravest, most capable, and the most selfless military on the face of the Earth,” Biden said. “And they were part of, simply, what I call the backbone of America. They’re the spine of America, the best the country has to offer.”

Flag-draped caskets arrived at airports and were escorted by police officers on freeways and into hometowns. Firefighters draped large American flags from cranes for the processions to pass under. Local citizens gathered on street corners and in cemeteries to pay their respects.

The funerals drew scores of people, including elected leaders on both sides of the political aisle. Former Vice President Mike Pence spoke at the service for Sanchez and at one point turned to the slain Marine’s mother.

Efforts were soon under way to make that true for all the slain.

Some of the tributes have been fleeting. Hangar 24, a craft brewery in Redlands, collaborated with Old Armor Beer Co. in North Carolina for a limited edition blonde ale they called “Angels of Kabul.” It was produced last fall with marketing that said “Lest we forget.”

Elected officials in several of the Marines’ hometowns passed resolutions honoring them. Flags flew at half-staff for a while. GoFundMe drives collected donations for the families.

There have been pub crawls and 5k runs. Thursday night, in San Diego, elected officials lit up the facades of government buildings in the colors of the Afghan flag.

More permanent memorials are taking shape, too. The 13 were awarded posthumous Purple Hearts and the Congressional Gold Medal.

Earlier this month, in Lawrence, Mass., officials unveiled a mural featuring Pichardo that will adorn a wall at Veterans Memorial Stadium there.

Columbia College, which Pichardo was attending while she served in the Marines, gave her an honorary degree earlier this year and announced the creation of a scholarship in her name. Scholarships have been created elsewhere for several of the others, too.

Norco built a memorial garden that honors native son Nikoui and the other service members killed in the bombing. Congressman Ken Calvert, R- Corona, introduced a bill to name the post office in Norco after Nikoui.

In Omaha, in the Beaver Lake neighborhood, officials topped the street sign for Greenwood Road with an honorary one that also brands it “ Daegan Page Way.” His father lives on the street.

“It’s emotional always when we do these things because it’s a reminder that he’s no longer with us,” Page’s mother, Wendy Adelson, told reporters. “But it gives you a sense of comfort as the community continues to want to remember and share his name and spread his name.”

Some of the families remain angry about what happened a year ago. Chappell, Nikoui’s mom, has accused Biden of having blood on his hands. Others have openly questioned the findings of an official investigation, released in February, that said the blast was unpreventable.

But some have pointedly resisted any public criticism. Soviak’s parents, who created a foundation that assists military veterans with various needs, said in a statement on Facebook, “What we have learned of his last hours does not change that he is gone forever ... we choose to remember Maxton not as a victim, we choose to remember him for the hero he is. Remember his name.”

In her interview with the St. Louis Post-Dispatch, Schmitz’s mother decried the ongoing political polarization in the country, including some of the commentary that’s followed the bombing.

She asked, “Is this the America that Jared and all the other fallen heroes paid the ultimate sacrifice for?”