A year after one son died in Afghanistan bombing, California mother copes with loss of second son 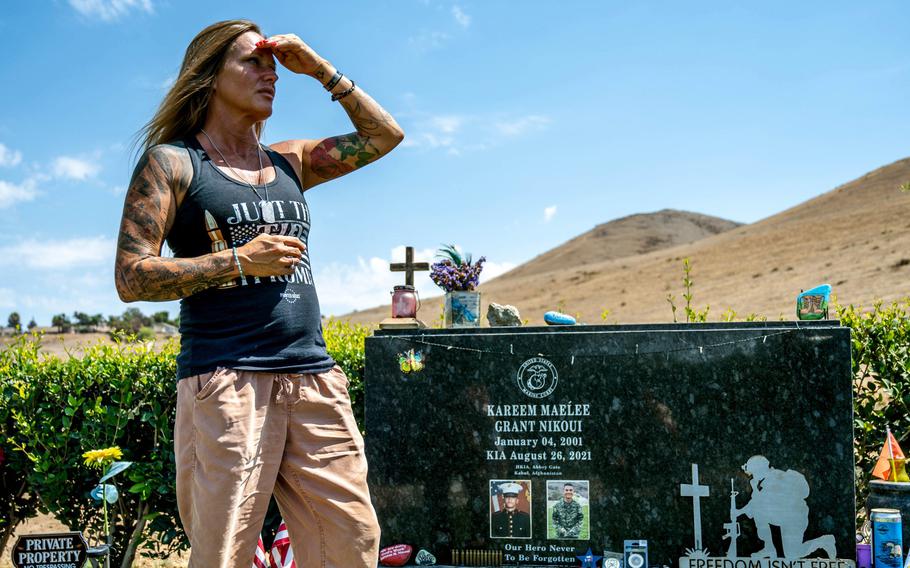 Shana Chappell stands at her son’s grave at Pierce Brothers Crestlawn Memorial Park and Mortuary in Riverside, Calif., on Thursday, Aug. 18, 2022. Chappell lost her 20-year-old son Marine Lance Cpl. Kareem Nikoui on Aug. 26, 2021, in the bombing at Afghanistan’s Kabul airport. On Tuesday, Aug. 9, 2022, her 28-year-old son, Dakota Halverson, took his own life at Pikes Peak Park in Norco, near a memorial for his brother, the Riverside County coroner’s office said. (Watchara Phomicinda, The Press-Enterprise, SCNG/TNS)

(Tribune News Service) — A couple times a month, Dakota Halverson would sneak at night into the Riverside, Calif., cemetery where his younger brother, Marine Lance Cpl. Kareem Nikoui, is buried to sleep on the grassy gravesite.

“Then the month of August hit, and Dakota started talking about how he just wanted to be with Kareem, how much he missed him, how much it hurt not having him (around),” she said. “It started hitting him. He started saying, ‘Kareem’s really gone, huh?’ And I would tell him, ‘Yeah, he is.’ ”

Nikoui, a 20-year-old jiu-jitsu champion who graduated from Norco High School in 2019 was among 11 Marines and two other service members killed Aug. 26 when a lone Islamic State suicide bomber set off explosives at Kabul’s airport during the chaotic U.S. withdrawal from Afghanistan. Observances are planned this week to mark the anniversary of that attack and remember the 13 fallen service members.

Chappell and her children were hurting more, grieving more, as they sensed the anniversary approaching.

Then, on Tuesday, Aug. 9, Halverson took his own life at Norco’s Pikes Peak Park, she said.

The brothers played together on the swings and slides at that park when they were kids, Chappell said. When Nikoui came home for weekends after a week of training at Marine Corps Base Camp Pendleton, they often spent time at the park.

“They would take off running across the grass and sometimes give each other piggyback rides, and see who could carry who the farthest,” she said. “Kareem would win because Kareem was a Marine. And he could carry whoever really far.”

Now, the mother of five children ranging in age from 32 to 17 is grieving the loss of two sons — in the same month — one year apart.

The attack at the airport in Afghanistan took the lives of three young Marines from the Inland Empire, including Cpl. Hunter Lopez, 22, of Indio; Lance Cpl. Dylan R. Merola, 20, of Rancho Cucamonga; and Nikoui.

Chappell, in an Aug. 18, interview at Pierce Brothers Crestlawn Memorial Park and Mortuary near the Riverside-Norco border, said she didn’t see the Halverson’s death coming.

“I guess when you’re grieving a child you’re pretty much in like a bubble and you can’t see out of that bubble,” she said, adding, “I never thought one of my kids would be so hurt that they would take their life.”

“When you’re close to someone, of course it is harder to see it,” Morris said.

Chappell now has a message for other parents: Pay closer attention to children, be aware of the pressure they are under and don’t assume they can cope with it.

“You might think they’re handling it OK, but deep down they’re not,” she said. “Look for the signs.”

Looking back, Chappell wishes she had.

“If I would have been looking for the signs with Dakota, if I would have known what they were, I would have spotted them,” she said. “I would never want another parent to go through this. Ever.”

Like all of her children, Halverson tended to be happy. From an early age, Chappell said, he had a genuine concern for people and wanted to help those in need.

“He’d make me go to McDonald’s and buy a whole bunch of cheeseburgers,” she said. “And then we’d have to drive around and look for homeless people and give them cheeseburgers because he felt they needed to eat, too.”

“Then, as winter would come, we’d have to go to the 99 Cents store and buy socks,” she said, so people living on the street would have warm, dry socks.

Chappell said she was sometimes frightened by the people to whom they gave food and socks.

“I’d be like, ‘That one seems a little crazy,’” she said, then her son would respond: “He’s not crazy, Mom, he’s just having a hard time.”

Halverson moved to the Los Angeles area at one point and got into some trouble, before moving back to Norco, Chappell said, while not getting into details. As Nikoui was preparing to deploy with the Marines, he told his older brother he wanted him to “straighten up and get a job, and when I get back from my deployment I’m going to help you.”

In the year since Nikoui’s death, Halverson made positive changes, Chappell said. And a few days before his own death, Halverson “stood here in front of (Nikoui’s) headstone and he told Kareem, ‘I did it.’”

Halverson also told family members how much he loved them, “saying sorry for anything that he might have done bad in the past,” she said. “I just thought that it was because he had straightened out his life and was doing so good.” Now, she said, it appears to have been “his way of saying that he was going to leave.”

Morris said apologizing for things from the past is a common sign that one is contemplating suicide, and she urges those who hear that to ask questions. It’s fine to thank the person for apologizing, she said, and suggested saying something like, “But it kind of felt like you were saying goodbye. What’s going on?”

Chappell said that, at times, Halverson was emotional.

“You could see that he had been crying,” she said. “You’d ask what’s wrong and he’d say he just misses Kareem, and he just wants to be with Kareem.”

Chappell said her son was especially happy the last week of his life.

“I didn’t know that was a sign until I looked that up,” she said.

“About two or three days before Dakota died, he had told me he really liked my arm tribute to his brother, to Kareem,” she said. “And I said, ‘Thank you.’ And he said, ‘If something happened to me, would you get tattoo tributes for me?’ ”

Chappell told Halverson nothing was going to happen to him, but that she would get a tattoo for him anyway.

“He said, ‘Really, you’d do that?’ ” Chappell said. “He let me know he likes orchids and his favorite color is burgundy.”

A few days ago, Chappell went to a local tattoo shop to have “Dakota” and an orchid painted on her side.

“I just don’t know where things went wrong,” she said. “I mean, I know it’s hard. The one-year (anniversary) is coming up. It’s bringing back a lot of hurt, a lot of memories you don’t want to have. But I don’t know, I guess it was just too much for him.”

As she struggles to move forward, Chappell said she intends to work harder to see that her other children find ways to cope with their grief.

As for Chappell, she said she felt numb.

“I’m in shock about it right now,” she said. “It hasn’t really hit me. It fully hits when you actually lay them to rest.”

Halverson will be buried next to his brother in September, Chappell said .

A gofundme account set up to raise money for the burial and memorial service had more than $47,000 as of early Sunday, Aug. 21.

Chappell worries about the moment when her older son is laid to rest.

“I’ve already talked to family and friends to make sure that I’m not alone — not because I’m afraid I’m going to hurt myself, but because when there’s people around me I keep my mind functioning.”