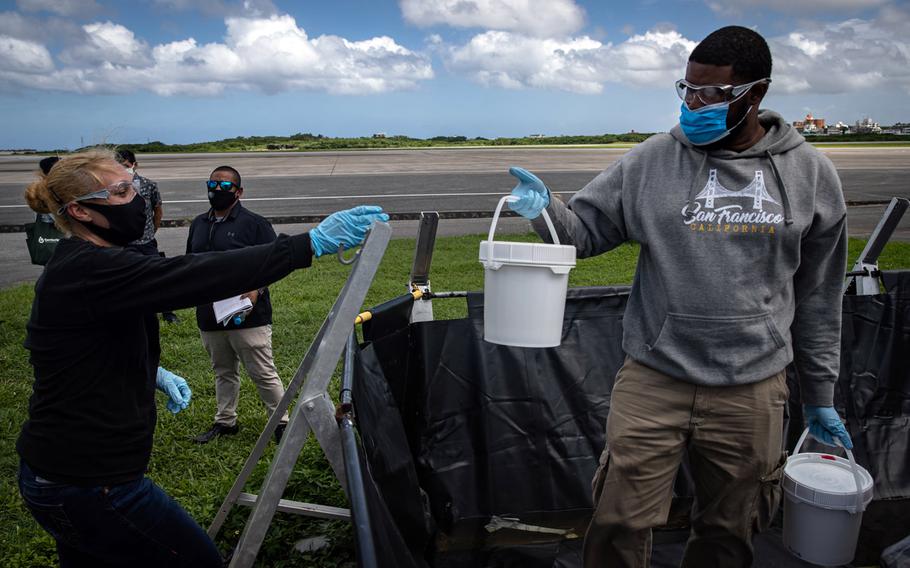 At a news conference in Naha, Gov. Denny Tamaki said he learned the Marines were releasing the water at about the time it was being done. He said the Marines notified the prefecture and Okinawa Defense Bureau by email at 9 a.m. that the water, which contains low levels of toxic organic compounds, was about to be released.

“It must have come as a shock for all stakeholders,” Tamaki said, adding that disposal methods were supposed to be discussed that day. "This is totally unacceptable.”

Representatives of the defense ministry and the U.S. military were scheduled to meet later Thursday to discuss results of July wastewater tests and disposal methods.

The water contains spilled firefighting foam and is stored in underground tanks at Marine Corps Air Station Futenma. The Marine Corps treated the water prior to releasing it, but it still contains low levels of toxic PFOS and PFOA. 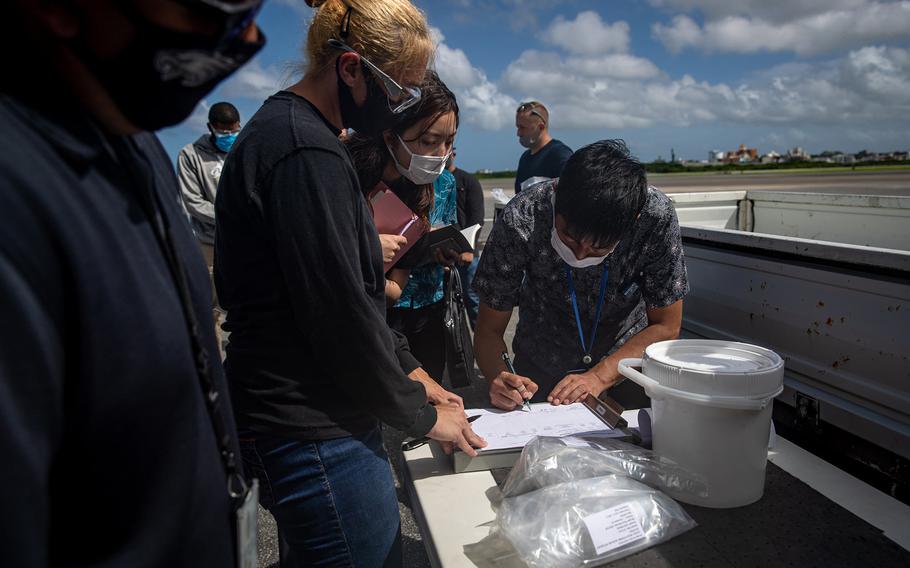 Once in the wastewater system, the water eventually reaches the ocean, according to a spokesman from the Okinawa Prefectural Enterprise Bureau, the agency responsible for the island’s water quality.

A defense bureau spokesman said the bureau was informed just prior to the water’s release. He declined further comment Thursday.

Marine Corps Installations Pacific spokesman Lt. Col. Matthew Hilton announced the water release in a statement Thursday. He said it was treated by a PFAS Effluent Treatment System, an activated carbon/ion exchange system technology, “to all but eliminate PFAS contamination in water.”

The PFAS residue removed by the system will be incinerated elsewhere in Japan at a facility approved by the Japanese government, the statement said.

Hilton in his statement said the installations command would continue to focus on “maintaining high standards of responsible environmental stewardship.”

He declined to say if the command had received permission from Japanese authorities to release the water.

The Marine Corps has been “fully open and transparent” with stakeholders about its plan to treat the contaminated water, Hilton said in a subsequent email Thursday to Stars and Stripes.

“We are not going to release the communication exchange between the Marine Corps and local government,” he wrote.

PFOS and PFOA are synthetic compounds found in aqueous firefighting foam, aircraft grease, water-repellant materials and fluorine chemicals. They have been known to cause tumors, increases in body and organ weight and death in animals.

In July, public broadcaster NHK reported that the U.S. military wanted to release harmful contaminants into a river on Okinawa. The Marines responded by saying it had asked to release the treated water into the wastewater system.

Okinawa prefecture asked the U.S. military to thermally dispose of the contaminants rather than release them into the environment.

The Marine Corps in a July 8 statement dismissed that idea and pledged to fully coordinate its plans with Okinawan officials prior to releasing any treated water.

Samples taken at MCAS Futenma by the prefecture in July registered 0.0025 micrograms per liter, Tamaki said at the news conference. He said the situation was handled poorly by the U.S. military and “not about whether a smaller number is good or bad.”

No samples taken from the water on July 19 exceeded 0.0027 micrograms per liter, the Marine statement said.

“This makes a safer and cleaner environment for all,” the statement said.

Tamaki called on the Japanese government to strongly protest the release of the water.