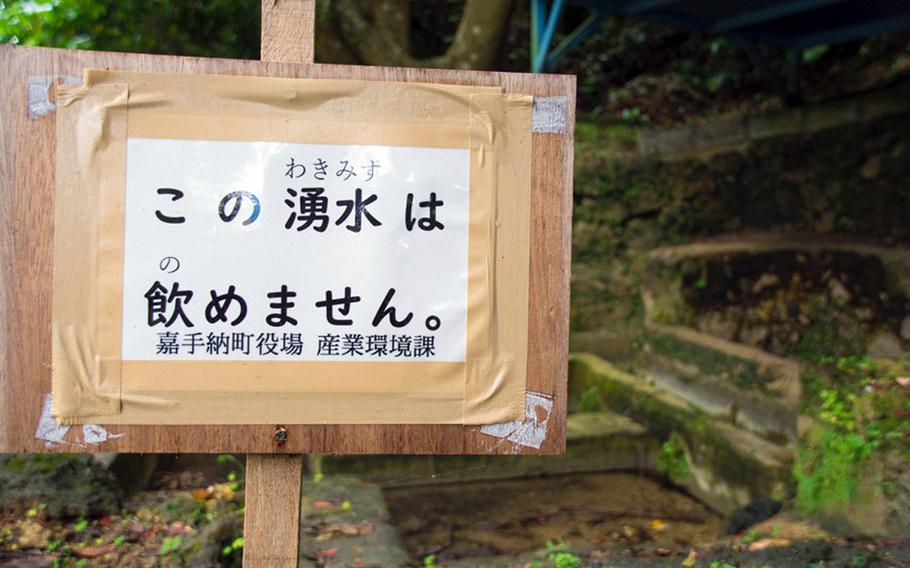 Buy Photo
A sign posted by town officials in May 2019 warns people about polluted spring water in Kadena, Okinawa. (Stars and Stripes)

CAMP FOSTER, Okinawa – The Marine Corps has pushed back against Japanese public broadcaster NHK, which reported Wednesday that the U.S. military wants to release harmful contaminants into a local river on Okinawa.

The report, which cited unnamed officials from Japan’s Ministry of Defense, said the U.S. military informed the Japanese government of its intention to release treated sewage containing contaminant known as PFOS into a river near Marine Corps Air Station Futenma.

The report said the Japanese plan to turn down the request.

In a statement Thursday, Marine Corps Installations Pacific said water would be treated and then released through the public wastewater system.

“The story reported by NHK on July 7 was inaccurate,” the statement said.

“Marine Corps Installations Pacific and United States Forces Japan have been coordinating with the Ministry of Defense and the Ministry of the Environment to release treated water through the public wastewater system; this wastewater is fully compliant with Japanese drinking water guidelines to include target levels for PFOS and PFOA, which are stricter than U.S. Environmental Protection Agency and Department of Defense guidelines.”

PFOS and PFOA are found in aqueous firefighting foam, aircraft grease, water-repellant materials and fluorine chemicals. They have been known to cause tumors, increases in body and organ weight and death in animals.

The treatment process is a “safe, efficient, and proven method” to reduce levels of the harmful compounds in contaminated water until it’s safe for release and complies with Japanese standards for drinking water, according to the Marines’ statement.

The plan would be “fully coordinated” with Okinawan officials prior to the release of any wastewater, the statement added.

Marine Corps Installations Pacific has not responded to a request for further information Thursday about where the treated wastewater would ultimately be disposed of.

MCAS Futenma is storing the contaminated water in tanks, the NHK report said.

A spokesman from the Okinawa Prefectural Enterprise Bureau, the agency responsible for the island’s water supply and quality, told Stars and Stripes by phone Thursday that the water would be released into the sea around Okinawa and not into a river. He added that the water would likely not be PFOS-free.

PFOS and PFOA are virtually identical synthetic, fully fluorinated organic acids, though their concentrations differ depending on the product.

The compounds have been found in high concentrations around MCAS Futenma and Kadena Air Base on Okinawa. U.S. military officials in Japan say the source of the PFOS and PFOA pollution on Okinawa is not necessarily U.S. military facilities. They have also begun phasing out aircraft firefighting foam with one featuring a new formulation.

Manufacture and importation of items containing the acids have been prohibited in Japan since 2010.

An unknown quantity of wastewater containing firefighting foam spilled June 9 at the Army base Torii Station when an above-ground reservoir holding contaminated water overflowed in heavy rains, according to June 12 statement from U.S. Army Garrison Okinawa. The water spilled into an adjacent drainage ditch leading off-base.

The firefighting foam contained both PFOS and PFOA, NHK reported.

The reservoirs were “never intended” to contain the foam and were “not designed to contain overflows of water,” the Army statement said.

Approximately 60,000 gallons of the toxic firefighting foam spilled on MCAS Futenma on April 10, 2020. About 22,000 gallons was contained on base. The remainder traveled off base through a storm drain and into a nearby stream and neighborhood.

Okinawa Gov. Denny Tamaki, speaking to reporters Thursday, said the plan to release the wastewater locally was unacceptable, NHK said in an updated report that day.

“We must demand that it be treated within the military,” he said.

The U.S. military was reportedly waiting for a response on the matter from the Japanese government when the NHK report was released. The Okinawa Defense Bureau told NHK that U.S. authorities are considering their options.