Cobra blood is off the training menu for US troops, PETA says 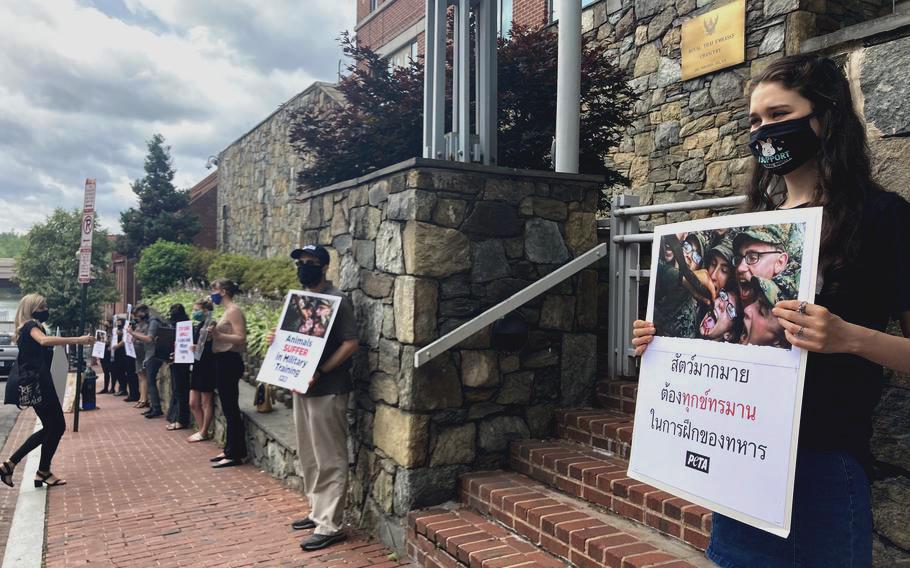 Buy Photo
People for the Ethical Treatment of Animals on June 3, 2021, protested the killing of king cobras during the U.S.-Thai military exercise Cobra Gold. The protest took place outside the embassy of Thailand in Washington, D.C. (Caitlin Doornbos/Stars and Stripes)

The animal rights group People for the Ethical Treatment of Animals declared victory this week after the practice of drinking the blood of cobras was axed from the multinational Cobra Gold military exercise in Thailand.

Killing the snakes to demonstrate a jungle survival technique was scuttled at the exercise earlier this month, PETA announced Monday, citing unnamed Thai military sources. The nonprofit, based in Norfolk, Va., spent years lobbying against a practice it called “frat boy-style barbarity.”

Images of beheaded snakes, their blood dripping onto the tongues of eager young Marines, were publicized by the Defense Department itself.

“We are proud that after PETA’s intensive campaigning, Thai and U.S. armed forces made the ethical and safe decision to not kill any animals during this year’s Cobra Gold exercises, apparently for the first time in the event’s history,” PETA vice president of international laboratory methods Shalin Gala wrote in an email Wednesday to Stars and Stripes. “This move means that this year troops were no longer made to eat live animals or drink the blood of beheaded snakes, which is a win-win, sparing animals and protecting public health.”

The III Marine Expeditionary Force, which is based in Okinawa, Japan, and usually participates in Cobra Gold, did not respond to an email seeking comment Wednesday.

PETA began campaigning in 2020 against the military killing cobras at Cobra Gold after the images came to their attention, Gala said. The group discovered that troops and instructors also killed chickens with their bare hands, skinned and ate live geckos and ate live scorpions and tarantulas.

Gala said the group was concerned about the poor treatment of animals, but also about the health of the service members.

“The World Health Organization has warned that ‘an estimated 70 percent of emerging and re-emerging pathogens’ — such as those that have caused the current COVID-19 pandemic, along with Ebola, Zika, SARS, MERS, smallpox, tuberculosis, and others — originated in animals,” the letter said. “It’s irresponsible to jeopardize our service members’ health and safety during these bloodlust exercises.”

“These actions likely influenced the Cobra Gold organizers to reconsider the ritualistic bloodlust killing of animals this year,” he said. “This is an important victory for ensuring that troops can learn survival techniques without having to mutilate and kill animals.”

Better jungle survival methods can be taught that do not include the killing of animals, he said.

Gala wrote that PETA would monitor future exercises to ensure the practice is not resurrected.

Cobra Gold typically takes place in the winter months and is one of the largest multinational exercises in the Indo-Pacific region. In addition to U.S. soldiers and Marines, thousands of troops from over 24 nations also take part.

This year’s 40th iteration was pushed back to July and August, and some activities were canceled, due to the COVID-19 pandemic, The Bangkok Post reported July 2. It said only 600 U.S. troops took part.