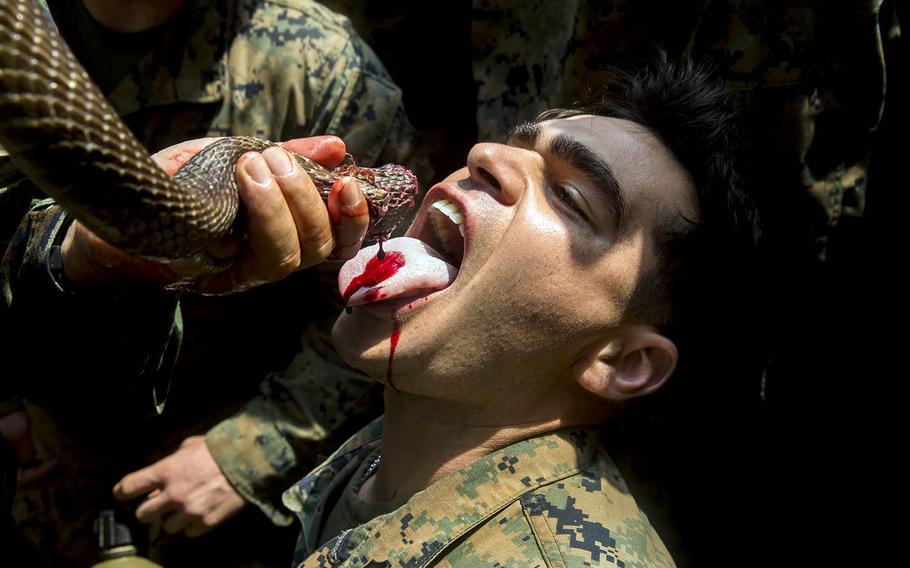 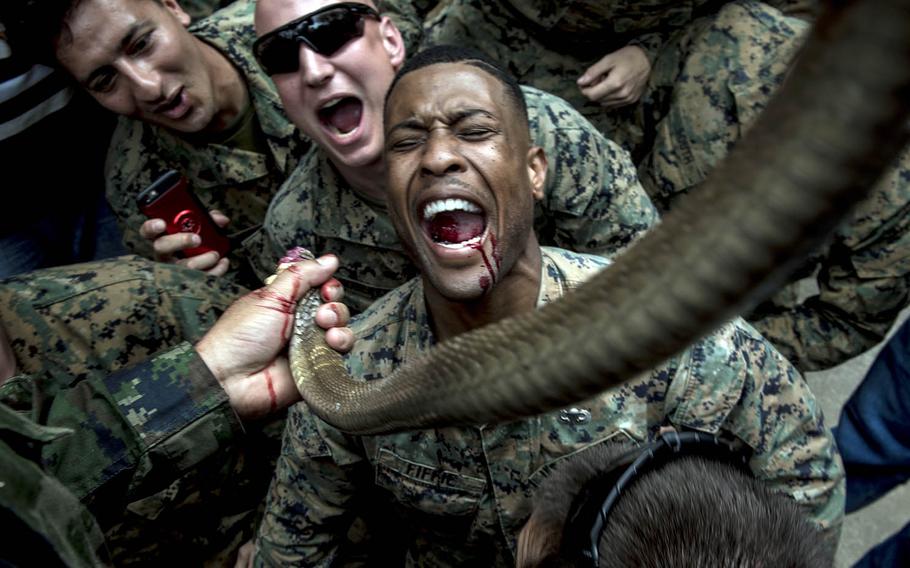 An animal rights group has petitioned the Pentagon to end the practice of Marines and soldiers decapitating snakes and consuming their blood during survival training at the annual Cobra Gold exercise in Thailand. U.S. service members gathering for a taste of cobra blood is “ritualistic rather than instructive” and may be a health risk, according to the plea Wednesday from People for the Ethical Treatment of Animals to Defense Secretary Lloyd Austin. “Cobra Gold is not a practical sustenance procurement training exercise but rather a cruel method of attempting to build camaraderie among troops,” said the petition signed by PETA vice president Shalin Gala. A Pentagon spokesman reached Wednesday said the department would not be able to respond until the following day. This is PETA’s second attempt to shut down that aspect of survival training. Last March, the organization wrote Marine Corps Commandant Gen. David Berger asking him to end the practice of killing cobras and other animals during Cobra Gold. The Marines did not respond at the time. Cobra Gold is a multinational exercise co-hosted by the United States and Thailand. It is the largest joint military exercise in Southeast Asia and includes training in disaster response and cyber-threat response and humanitarian assistance. Part of its jungle survival training involves Thai military instructors preparing native insects and snakes for consumption. U.S. military photographers typically record the vivid scenes. “Despite the extreme cruelty inflicted during Cobra Gold, the photographs and videos document a complete indifference to the suffering of the animals,” the PETA petition said. “Instead, participants revel in the torture and deaths, in what can only be described as a party-like atmosphere.” The exercise is usually staged in the spring, but with the coronavirus pandemic, Cobra Gold is postponed until fall, Indo-Pacific Command spokesman Army Maj. Randy Ready said Wednesday. The command is still planning the exercise and figuring out what it will look like, he said. PETA also called attention to the potential health risk of drinking cobra blood, saying it “poses a zoonotic disease threat akin to the COVID-19 pandemic currently wreaking havoc across the world.” The Centers for Disease Control and Prevention said Feb. 10 that while the coronavirus originated in an animal, likely a bat, no current findings suggest that animals perpetuate the virus’ spread. “At this time, there is no evidence that animals play a significant role in spreading SARS-CoV-2, the virus that causes COVID-19, to people,” the CDC website says. “The first reported infections were linked to a live animal market, but the virus is now spreading from person to person.” COVID-19 is a respiratory disease caused by the coronavirus. In 2011, the Marine Corps Mountain Warfare Training Center in California curtailed its use of live animals in survival training after discussions with PETA, the petition states. And prior to that, the U.S. Army Dugway Proving Ground in Utah did the same after PETA appealed to then-Secretary of Defense Les Aspin. As an alternative, PETA in its petition proposed virtual training or using plant-based foods in the survival food procurement portion of the exercise.earl.erica@stripes.com Twitter: @ThisEarlGirl