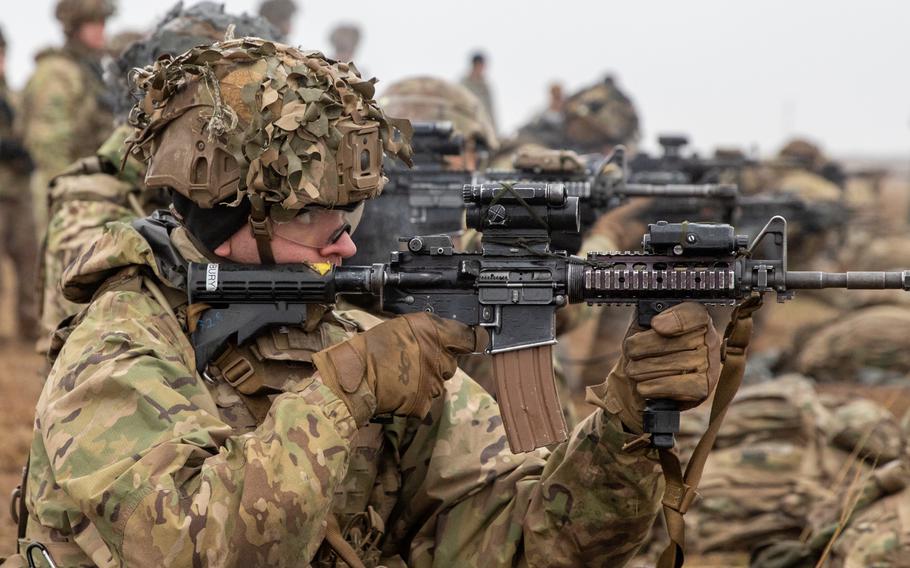 U.S. soldiers with the 101st Airborne Division fire M4 rifles on a range in Constanta, Romania, Jan. 12, 2023. Elements from the divisions 1st Brigade Combat Team are preparing to deploy to Europe and backfill units that have been deployed to Romania since the summer. (Nicholas Goodman/U.S. Army)

STUTTGART, Germany — Army units are gearing up for a potential deployment to Europe, where they are expected to be tasked with deterring Russian aggression in the Black Sea region.

Elements from the 101st Airborne Division’s 1st Brigade Combat Team and the 10th Mountain Division headquarters are preparing for the mission, the Army said in a statement Saturday.

“Preparation for this potential deployment provides flexibility to reassess conditions and respond to a dynamic security environment,” the Army statement said.

The Army said the move doesn’t change force levels, but rather aims to ensure forces are positioned to provide “a robust deterrent and defensive posture alongside our Allies across the European continent.”

The Army statement did not specify where the units are going, but a military official told Stars and Stripes the soldiers are expected to backfill a 101st Airborne Division headquarters and a subordinate brigade deployed to Romania since the summer. However, the military could adjust where those forces go based on security conditions in the coming weeks and months.

The 101st units were ordered to Romania in June and operate mostly out of Mihail Kogalniceanu Air Base, which serves as a hub for the Army in the Black Sea region.

During their time in Romania and other locations around Europe, 101st soldiers have been tasked with monitoring events in Ukraine for potential spillover into allied countries, while incorporating lessons from the war into how American ground forces train.

“The United States will continue to adjust its posture as needed in response to the dynamic security environment,” the Army said in its statement.