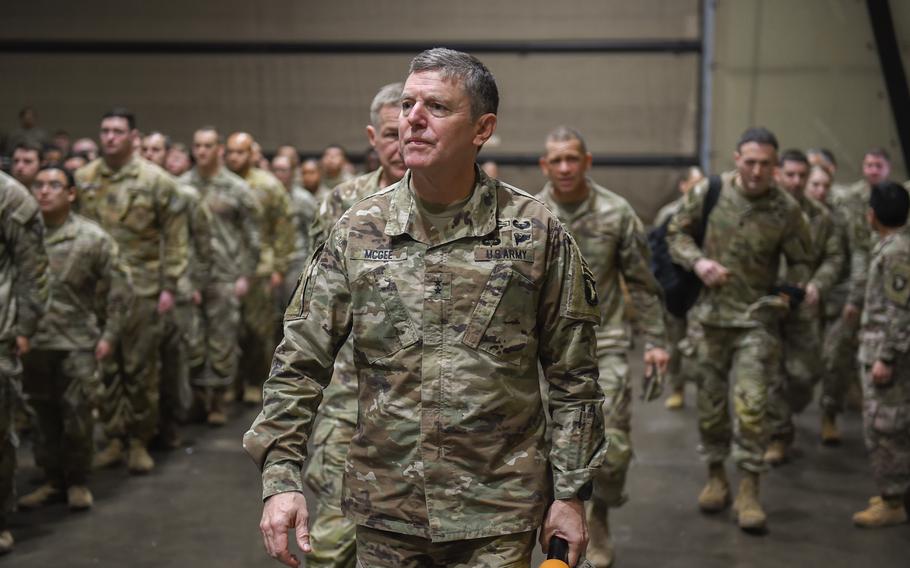 Maj. Gen. JP McGee, commander of the 101st Airborne Division, escorts Army Chief of Staff Gen. James McConville through a hangar at the Mihail Kogalniceanu Air Base, Romania on Dec. 16, 2022. Hundreds of soldiers were on hand to meet the Army’s top general. (Michael Slavin/Stars and Stripes)

MIHAIL KOGALNICEANU, Romania — The 101st Airborne Division soldiers here are positioned close enough to Ukraine that their artillery is in easy range of the war-torn country and intelligence gatherers can monitor fighters buzzing around the Black Sea.

The 2nd Brigade Combat Team, deployed on the division’s first operational mission in Europe since World War II, functions as the most forward-based American unit in proximity to the fighting in Ukraine, military leaders say.

There are now about 5,000 soldiers along NATO’s southeastern flank, the majority of whom are anchored at strategic locations near Romania’s coastline.

Ordered overseas in June, the unit is part of a U.S. push to reinforce NATO terrain and be prepared to respond if the war spills over into allied territory.

In the aftermath of Russia’s full-scale invasion of Ukraine, Romania has emerged as the centerpiece of U.S. efforts to deter Russian aggression in southern Europe, while Poland has emerged as the Army’s center of gravity in the north.

“We are ready for whatever comes our way, and I’m very confident that we will accomplish any mission that’s given to us,” Maj. Gen. JP McGee, 101st Airborne Division commander, said during a recent interview at his Mihail Kogalniceanu Air Base headquarters. Last week, Army Chief of Staff Gen. James McConville visited the base to obtain security briefings and meet with 101st Airborne soldiers, many of whom are on their first deployments.

In a meeting with a rifle company of about 120 soldiers, McGee said he asked for a show of hands of how many have been involved in a firefight.

“There are about two soldiers maybe,” he said.

While it’s not combat in Romania, being in the thick of things in Europe is what many infantrymen sign up for, McGee said.

“Our soldiers join the Army to do all sorts of things,” he said. “A bunch of them are eager. I’d say most of them are here to deploy. It’s not Iraq or Afghanistan, but they’re operating forward. They’re doing something meaningful.”

U.S. commanders in Romania emphasized that they are not on a “combat deployment,” but the mission carries with it a level of intensity unmatched when compared with the European troop rotations of recent years.

“It has a powerful impact on our junior soldiers,” Matthaidess said. “When you put (the mission) in proximity, it makes it real.” 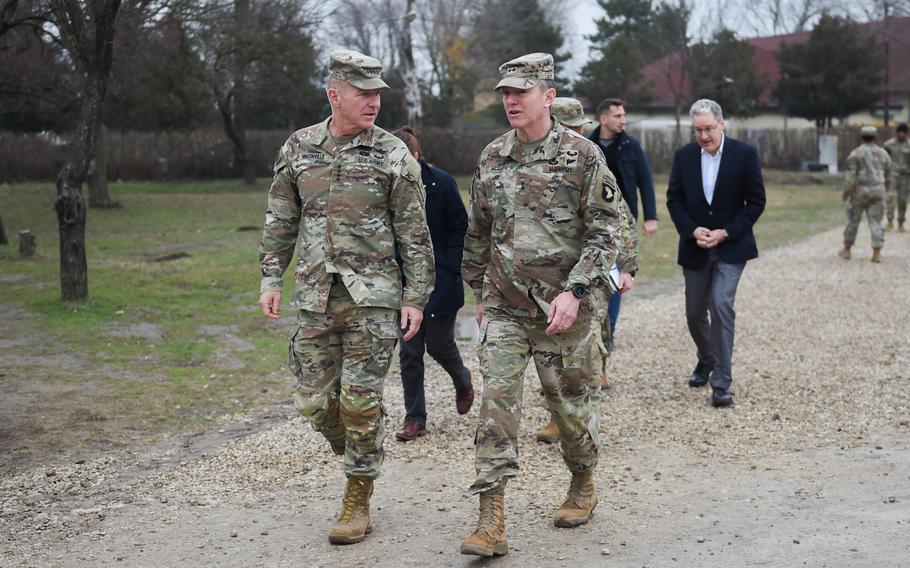 Maj. Gen. JP McGee, commander of the 101st Airborne Division, and Army Chief of Staff Gen. James McConville held talks on the security situation in Ukraine and the division's deployment to Romania during McConville's visit to Mihail Kogalniceanu Air Base in Romania on Dec. 16, 2022. (Michael Slavin/Stars and Stripes) Army Chief of Staff Gen. James McConville addresses soldiers from the 101st Airborne Division at Mihail Kogalniceanu Air Base, Romania, during his visit on Dec. 16, 2022. About 5,000 soldiers from the division are operating in Europe, with the bulk of the force anchored in Romania. (Michael Slavin/Stars and Stripes) Army Chief of Staff Gen. James McConville eats lunch with soldiers at Mihail Koglniceanu Air Base, Romania, during his visit on Dec. 16, 2022. (Michael Slavin/Stars and Stripes)

The future of the 101st’s mission in Romania and whether the Pentagon will send another brigade to replace the rotational force there when its deployment ends this spring aren’t yet clear.

But military officials say their planning will give political leaders options.

“So no matter what happens, we’ve set this southeastern part of NATO’s flank for any eventuality,” McGee said.

In some ways, the war in Ukraine has given momentum to a Pentagon vision that dates to the early 2000s, when the U.S. sought to expand rotations in newer NATO states like Romania and Poland, the so-called “new Europe,” rather than hunker down in the “old Europe” garrisons of Germany.

From the 101st Airborne’s forward headquarters at the air base near Constanta, known by the soldiers as “MK,” the fighting between Ukrainian and Russian forces in the Kherson region is about the distance from Washington, D.C. to Virginia Beach, Va.

The scale of the war and conservative estimates of tens of thousands of casualties, a degree of destruction unseen in Europe since World War II, have thrust soldiers into historic events, McGee said.

“It is a little bit surreal to be here in this setting,” he said. “I think the historical significance of our return to Europe, the importance of this mission, I think soldiers feel it and see it.”

The 101st’s mission in Europe is essentially twofold: monitor events in Ukraine for potential spillover into allied countries and incorporate lessons from the war into how American ground forces fight, he said.

“In terms of force protection, in terms of protecting the soldiers that are here, we are very vigilant about keeping an eye on anything that would cause us concern,” McGee said.

There are no immediate signs of a crisis on NATO turf. If the circumstances change, McGee is confident that his team has “the appropriate indications and warnings in order to be able to see that” and act accordingly.

McConville, the Army chief of staff, echoed that sentiment during his recent swing through the European theater.

“We don’t have an imminent threat on our soldiers ... (but) what we always want our soldiers to do is plan for the worst-case situation so that they are ready if anything happens,” McConville said. 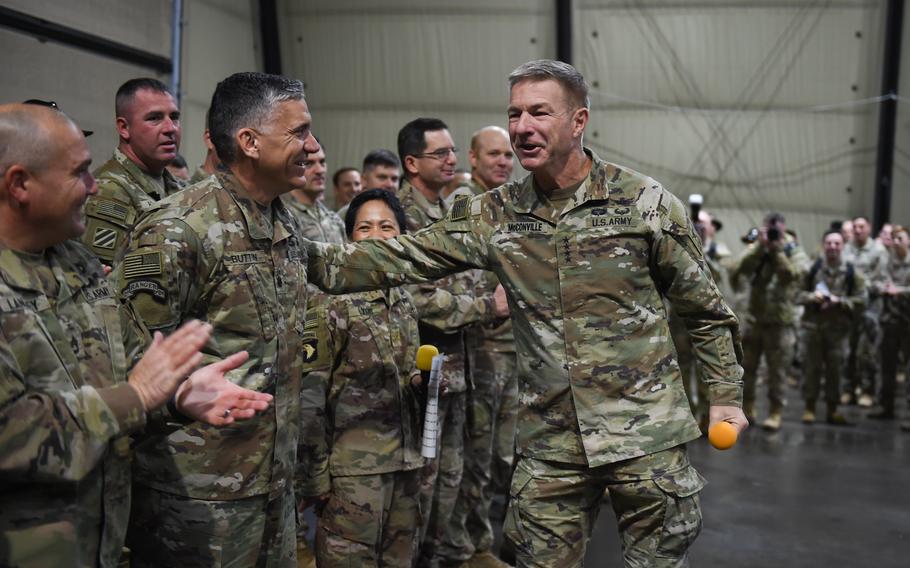 Army Chief of Staff Gen. James McConville recognizes Lt. Col. Steven Button on having the most deployments of soldiers at Mihail Kogalniceanu Air Base, Romania, during his visit on Dec. 16, 2022. Within the division, commanders say a majority of the soldiers are on their first deployment overseas. (Michael Slavin/Stars and Stripes) 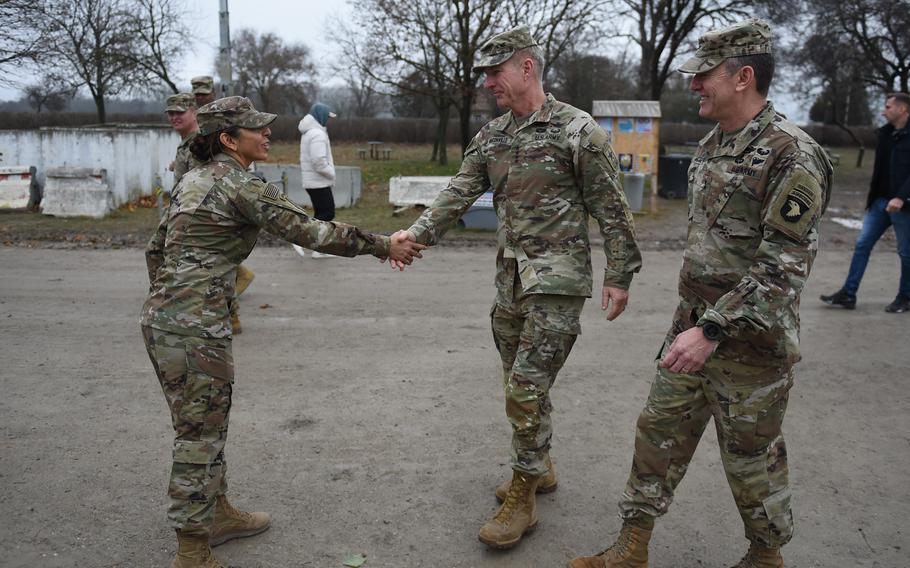 Maj. Gen. JP McGee and Army Chief of Staff Gen. James McConville mingle with soldiers from the 101st Airborne Division, who are on a deployment to Mihail Kogalniceanu Air Base, Romania. McGee and McConville discussed the security situation in the region during a Dec. 16, 2022 visit. (Michael Slavin/Stars and Stripes)

The Europe mission is forcing soldiers on the ground to operate in new ways as they train with the Russians in mind.

The 101st, like U.S. units positioned in Poland and the Baltics and at the Army’s major training hub in Grafenwoehr, Germany, is trying to apply tactical lessons learned from Ukraine as fast as it can, McGee said.

Replicating some of the successful Ukrainian tactics in dispersing forces has been a priority, he said.

Matthaidess, the brigade commander, said his unit has placed an emphasis on how care of injured troops would play out on a European battlefield.

Unlike in Afghanistan and Iraq, where it was generally possible for a chopper to swoop in for a speedy evacuation, such operations could be severely restricted, given an adversary like Russia’s ability to carry out missile and air defense strikes.

The unit also has replicated trench systems being used by the Russians in Ukraine, giving soldiers a chance to practice how to assault dug-in positions.

“I think it has been eye-opening for everybody,” Matthaidess said.

The 101st also is planning drills with allies that are focused on defending the Black Sea coastline and countering amphibious threats.

“One of the interesting things about being here is you get a chance to train on the actual terrain that you would have to defend,” McGee said.

The 101st has troops scattered across several countries, including small contingents in Bulgaria, Slovakia and Hungary. But Romania is the main hub, with soldiers positioned at various training sites in the country.

The most forward element for the 101st is positioned only 20 miles from the Ukrainian border, near the town of Babadag. Small numbers of troops, generally around platoon- and company-sized elements, move in and out of the area to train and keep an eye out for possible malign activities across the border.

Sgt. Maj. Vitalia Sanders, 40, who was born in western Ukraine, said she uses her personal ties to convey to her soldiers the urgency of their mission in Romania.

“Just being here, so close to home, makes me hungry and makes me fight and hopefully spread that energy to soldiers to let them know how important this is for everybody there, and of course, what we are doing here,” she said.

Sanders, who moved to the U.S. when she was 12, still has a brother and extended family in Ukraine. In recent weeks, it has been hard to keep lines of communication open as they cope with regular power outages. But they are scraping by, she said. 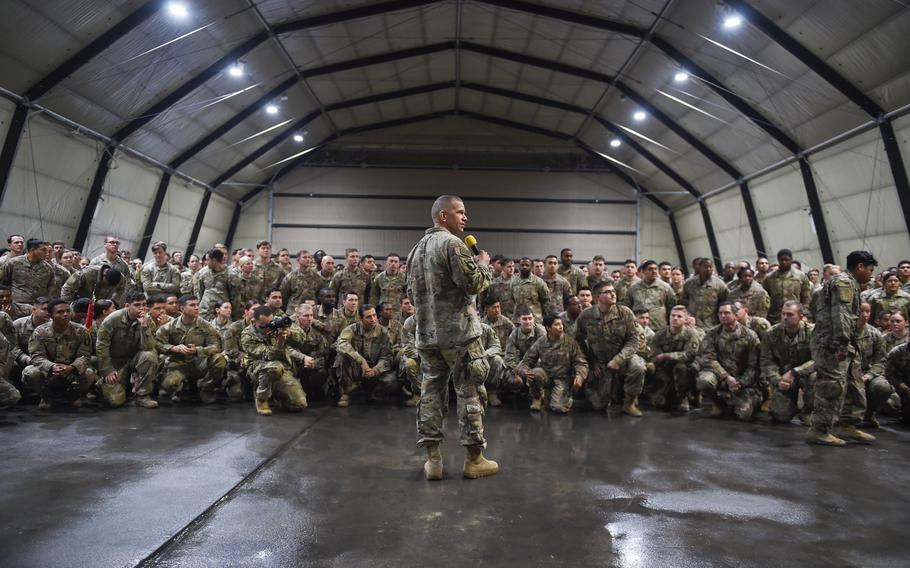 Sgt. Maj. of the Army Michael Grinston addresses soldiers from the 101st Airborne Division at Mihail Kogalniceanu Air Base, Romania, during his visit on Dec. 16, 2022. (Michael Slavin/Stars and Stripes) Sgt. Maj. Vitalia Sanders of the 101st Airborne Division was born in western Ukraine and still has family ties in the country. Operating so close to the border has added meaning to her Romania deployment, she said. (Michael Slavin/Stars and Stripes)