What will the US do if Putin goes nuclear on Ukraine? Threats give question growing urgency 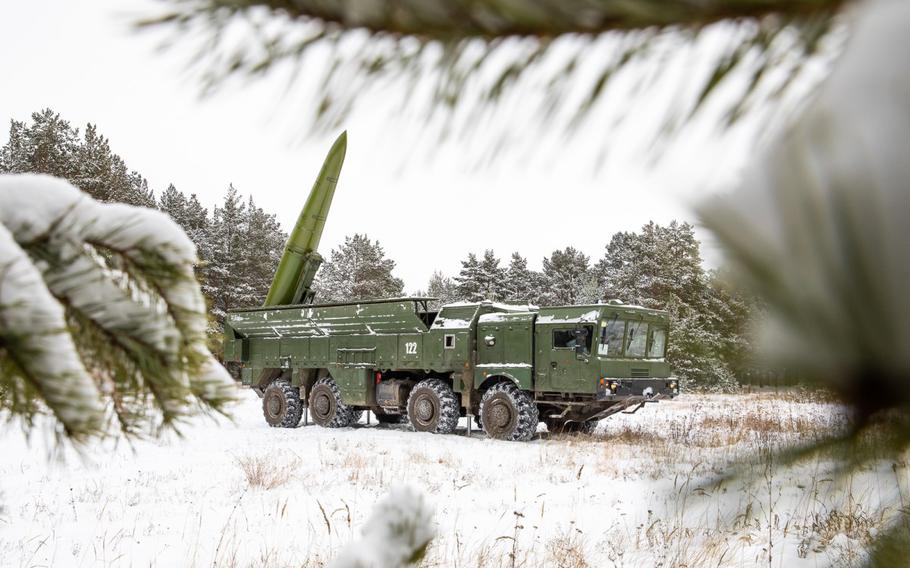 Another, less risky choice: remove all restrictions on the types of weapons the Biden administration is willing to send into Ukraine. Untapped economic penalties, such as unlimited U.S. secondary sanctions on any entity doing business with Russia also could be on the table.

If Russia violates a nearly 80-year-old global taboo and drops a nuclear bomb of any size on Ukraine, the dilemma facing the U.S. will be imposing costs severe enough to meet the magnitude of the moment while averting the kind of nuclear showdown feared during the Cold War.

“We have not faced the prospect of Armageddon since Kennedy and the Cuban missile crisis,” President Joe Biden told reporters last week. “I don’t think there’s any such thing as the ability to easily (use) a tactical nuclear weapon and not end up with Armageddon.”

U.S. intelligence analysts continue to say that they have no evidence that Putin is planning an imminent strike, and several analysts and former U.S. military officers who spoke with Stars and Stripes characterized the threat as unlikely, given the consequences, but not out of the realm of possibility.

Biden’s comments come as the Kremlin has ratcheted up its nuclear saber-rattling in the wake of repeated losses on the battlefield.

And over the weekend, Putin’s forces unleashed a wave of indiscriminate shelling across Ukraine, following an explosion that severely damaged the bridge Russia built in Crimea after its illegal annexation of the peninsula.

National security adviser Jake Sullivan has said the Biden administration spelled out to Moscow the consequences it will face if it carries out a nuclear strike. Sullivan did not elaborate on what those entail. But such an attack would be historic and have implications for the U.S military in some form.

“Russia is very concerned about direct involvement of U.S. conventional air power, and so we’ve got to keep that option on the table,” said retired Air Force Lt. Gen. David Deptula, dean of the Mitchell Institute of Aerospace Power Studies in Washington. “But we’ve got to be ambiguous about it.”

To send Russia a signal of deterrence, the U.S., should consider moving B-52 and B-2 bombers into the European theater to put the Russians “on notice,” he said.

Deptula stopped short of advocating a direct military response in the event of a nuclear attack in Ukraine or detailing what it could look like, citing the need for tactical ambiguity. 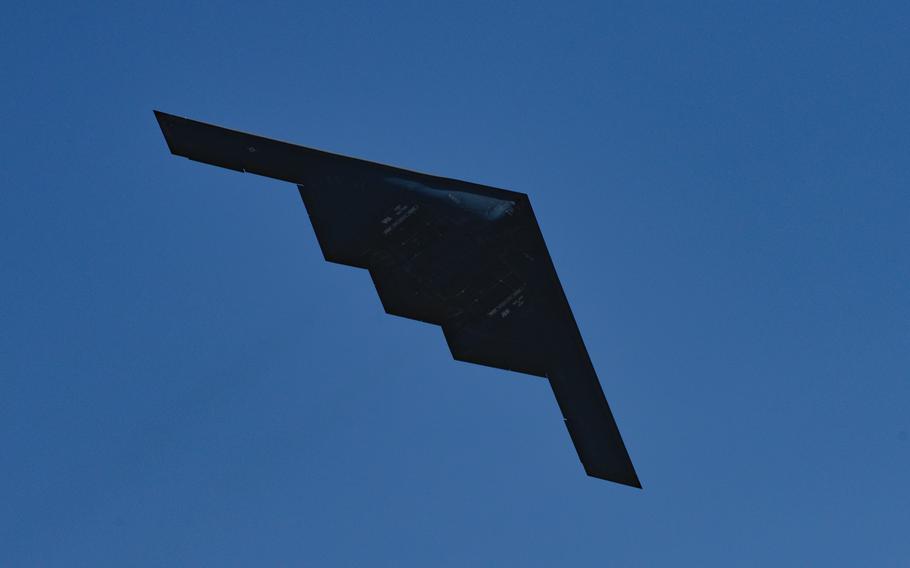 A B-2 Spirit flies over Whiteman Air Force Base, Mo., in 2019. U.S. stealth bombers and precision missile strikes could be among White House options to deliver the promised catastrophic consequences if Russian President Vladimir Putin orders a tactical nuclear strike on Ukraine. (Alexander Riedel/U.S. Air Force)

But some former military officials have been more explicit. Retired Gen. David Petraeus said the U.S. could use its vast conventional arsenal to obliterate the Russian military in Ukraine.

“Just to give you a hypothetical, we would respond by leading a NATO, a collective effort that would take out every Russian conventional force that we can see and identify on the battlefield in Ukraine and also in Crimea and every ship in the Black Sea,” Petraeus told ABC News earlier this month.

But such a move could increase the odds that Russia responds with the kind of nuclear escalation Biden has described in apocalyptic terms.

Putin is “not joking when he talks about potential use of tactical nuclear weapons or biological or chemical weapons,” Biden told reporters in New York on Thursday. “We are trying to figure out what is Putin’s off-ramp. Where does he find a way out?”

For that reason, the administration’s position from the outset, that it’s not in vital U.S. interests to become directly involved in the Russia-Ukraine war, is likely to hold even if the conflict goes nuclear, said John Deni, an expert on global security at the U.S. Army War College.

“A more likely response than American boots on the ground or American planes in the skies would be to remove all inhibitions on Western aid to Ukraine,” Deni said.

“So I think there are a whole number of things that we can do to ratchet up the pressure on Russia without necessarily escalating through a direct attack on Russian forces in Ukraine,” he said.

Deptula agreed that the supply of such weaponry is a near certainty if Russia resorts to a nuclear attack.

“It needs to be made clear to (Putin) that at a minimum, what this would trigger would be complete and total support to the Ukrainians with the weapons that had been withheld so far and the restrictions that have been in place so far,” he said.

That would mean Ukraine could use Western arms to launch attacks inside Russia.

Fears over Putin’s next move coincide with a series of embarrassing military setbacks in Ukraine, raising questions about how a desperate Putin could lash out if faced with defeat.

Russia’s nuclear arsenal includes between 1,000 and 2,000 tactical nuclear weapons, designed for use on the battlefield, according to various assessments.

Depending on their design, they can be used to take out military bases or small towns, with the aim of concentrating the radiological damage. A test detonation of a Mark-7 Thor tactical fission bomb during Operation Buster-Jangle in 1951. Russian President Vladimir Putin said in a recent speech that he would use "all available means" to hold on to Ukrainian territories, mentioning the U.S. nuclear attacks on Japan during World War II as a precedent. (National Archives)

The weapons can be deployed from land, sea and air. Russia’s tactical bombs are stored at various depots and would need to be moved to a delivery system. Those sites are likely under close surveillance for indications of activity.

The effectiveness of tactical nuclear weapons for use in turning the tide of the war is debatable, analysts say.

In their smaller form, “these weapons are not really capable of changing the situation on the ground because the nature of this war is such that there are no large concentrations of troops,” said Pavel Podvig, a senior researcher at the United Nations Institute for Disarmament Research in Geneva. “It’s not clear how (a tactical nuclear bomb) would be used to stop the Ukrainian offensive.”

To be effective, Russia would need to use numerous tactical weapons over a large area, given the dispersed nature of the war, he said.

“If Russia would decide to use nuclear weapons, the idea might be to shock Ukraine into surrender … and that means it would have to be on the scale of Hiroshima or Nagasaki,” Podvig said. “Tens of thousands or hundreds of thousands of people (killed.)”

Deni, however, said smaller tactical weapons could have military utility for Russia.

“One could argue that if he were to use a tactical a nuclear weapon at a particular place on a battlefield, it would freeze the front at that location at a minimum,” he said. “They probably take out a lot of Ukrainian forces in the process.”

Still, both of them concurred that the chances of Putin using such weapons is remote because of the political and economic consequences and the risk of Russia becoming a pariah state.

But if Ukraine’s counteroffensive continues to gain momentum or if the return of Crimea to Kyiv’s control comes into military play, circumstances could change.

“Crimea is the one area where I feel like the risk is highest for him to do something like this,” Deni said.

At that point, much could hinge on finding a diplomatic solution, which looks politically untenable for Ukrainian President Volodymyr Zelenskyy, who has said he is intent on taking back the peninsula.

Deptula put the odds at about 15% that Putin deploys nuclear weapons. Given the amount of damage Russia has inflicted on Ukrainian cities, there is no reason to think that going nuclear would give Putin moral pause, Deptula said.

What’s going to hold him back is the global response, he added.

“We need to make sure that he understands that there will be significant consequences and that they may not be the ones that he anticipates,” Deptula said.