Soldiers with the 10th Mountain Division participate in the 2023 D-Series Winter Challenge. The competition has been held yearly since 2018 at Fort Drum in order to help commemorate the hardships and trials that the original 10th Light Division (Alpine) soldiers went through to prepare for combat. (10th Mountain Division/Facebook)

Tuesday was Caraway's second year participating in the D-Series. The last time he participated, there weren't as many events, he said.

Staff Sgt. Skylar K. Humburt was at the hypothermic casualty lane where soldiers were briefed, then went over to the staged casualty in a field, packaged the casualty, covered it up, moved the body 100 meters up and 100 meters back before calling for medical transportation.

"This training is important because it gets the current 10th Mountain Division back to its Alpine roots," he said. "It's a great time to be in the north country." 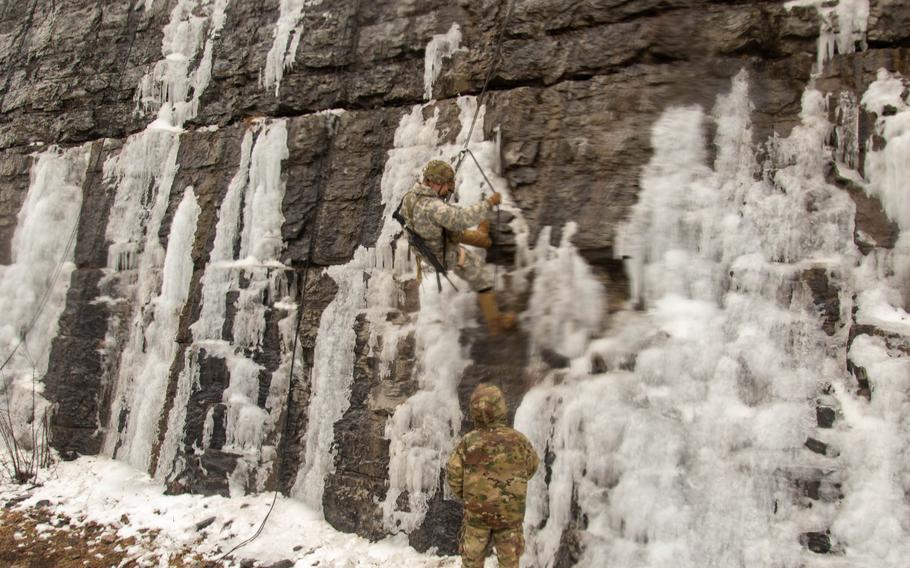 Rappelling, knot tying, and medically clearing a hypothermic casualty were just some of the events taking place during the 2023 D-Series Winter Challenge on Fort Drum. (10th Mountain Division/Facebook)

The competition has been held yearly since 2018 at Fort Drum in order to help commemorate the hardships and trials that the original 10th Light Division (Alpine) soldiers went through to prepare for combat.

"D-Series" is a reference to the winter training event that soldiers of the 10th went through from March to April 1944 in Colorado, which helped them prepare for combat in Italy during World War II.

The D-Series training this week is meant to emulate the culminating training in 1944.

There will be over 550 nine-soldier teams across Fort Drum and 3rd Brigade Combat Team, 10th Mountain Division, stationed at Fort Polk in Louisiana.

The soldiers will compete in a 9-mile ruck movement with graded stations along the way that are winter-focused and designed to test proficiency and knowledge.

Soldiers went through a stress shoot, medically treating a hypothermic casualty, installing tire chains on a military vehicle, a ski challenge, knot tying, rappelling, a weapons station, employing Ahkio sleds as a member of a squad, and a D-Series History Test.

The cold rain that the north country saw made an appearance as well during the challenge.

"There's the old adage, 'If it ain't raining, we ain't training,'" Humburt said. "It's not the best, but we make do and we make the mission happen."

Humburt said by training in the worst weather conditions, it allows them to be prepared.

He went on to say that he has participated in the D-Series twice and this was his first year running a lane.

Humburt said that he found transitioning to snowshoes, running in deep snow, skiing, and the distance to be the most challenging aspects of D-Series.

After installing tire chains on a military vehicle, Pfc. Devin A. Cooper said this was his first time participating in the D-Series.

Cooper said teamwork is important in the D-Series.

"It takes all of us to motivate each other," he said.

With installing the chains, Cooper said one person can't do it themselves.

"Stronger together as a team," he said.

He found the ruck to be the most challenging.

Fort Drum drivers should be alert for soldiers crossing roads during the Winter Challenge. Bomporto Bridge will be closed again from 8 a.m. to 3 p.m. Thursday for the training.