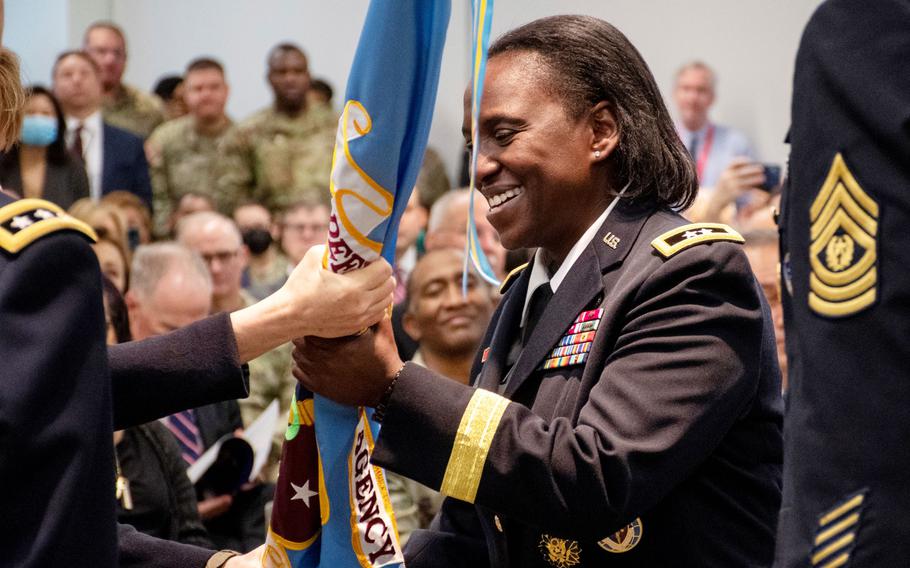 FORT SAM HOUSTON, Texas — Army Maj. Gen. Telita Crosland took over as the new director of the Defense Health Agency on Tuesday with a pledge to spend her early days listening and learning how to use lessons from the coronavirus pandemic to improve the health care system.

“I'm probably not going to sleep in the first 90 days, and that'll be OK. I want to create some forums where I can just listen,” Crosland said recently at Joint Base San Antonio-Fort Sam Houston in Texas. “We have not forgotten that medicine, writ at large, is about human beings. It's about caring for human beings, and I'm committed to meeting them where they're at.”

Crosland, 55, will be the fourth director of the 9-year-old agency, which has a $56 billion budget and has grown dramatically in its scope through congressional mandates that began in 2016. That was the year that Congress approved merging each service branch’s health system into one centralized agency meant to run more cheaply and efficiently.

With the merger completed in 2021 — following a delay caused by the pandemic that began the previous year — her predecessor Army Lt. Gen. Ronald Place said Crosland will now have to lead the DHA’s shift from “transition to execution.”

“She has served at every level of Army medicine and has the experience, perspective and grit necessary,” he said in a statement.

In the next five years, the U.S. will face a “gathering storm” of labor shortages, inflation and long-lasting impacts of the coronavirus pandemic within the health care industry, according to a September article from the consulting firm McKinsey and Company. The Defense Health Agency, along with other major health care providers, must find ways to keep costs down while investing in patient experience, simplified administrative work and clinic productivity, according to the firm.

The pandemic has provided some insights on reinvention, Crosland said.

“The system got stressed, and we did things in a system we wouldn’t want to do. It turned out that some of those were added value. We were able to monitor patients at home … because we didn’t have hospital beds,” she said. 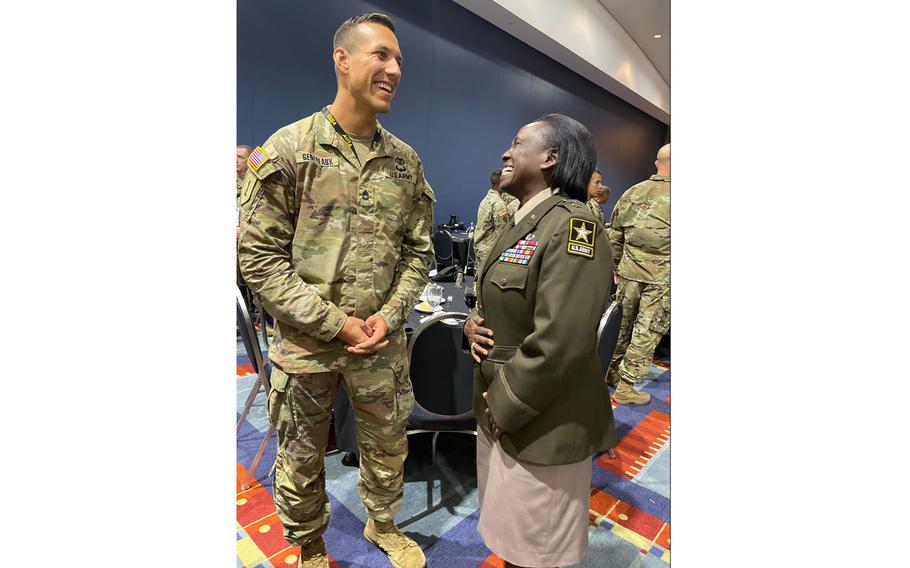 Army Maj. Gen. Telita Crosland took over as director of the Defense Health Agency on Jan. 3, 2023. (Photo provided by the Office of the Surgeon General)

Some hospitals sent patients home with monitoring systems and checked in on them virtually, which freed up hospital space and staff attention for sicker patients. That is acceptable in some cases, Crosland said, citing an example of how not to overwork nurses as military hospitals brace for a future staffing shortage.

The DHA is headquartered in Falls Church, Va., and is responsible for treating troops deployed in war zones, those at their home duty stations, their families and military retirees. In total, it supports 9.6 million people. It also oversees the military’s health insurance Tricare and the 500,000 civilian providers that accept it.

The agency has a training mission to continue to bring the military’s newest medical staff into its 45 hospitals and 617 clinics. It also spends about $1 billion each year on research and development.

Crosland, who will be promoted to lieutenant general Jan. 20, comes into the director’s role from the Army Surgeon General’s Office where she has served as deputy commander since 2019 and helped lead the agency through the coronavirus pandemic and the U.S. withdrawal from Afghanistan, which involved hastily flying people out of the country who had a variety of health conditions.

Guiding those two missions, she said, taught her that when the team at military medicine works together “the impossible is absolutely executable.”

Crosland said those lessons will guide her at the DHA, where she said the integration of military medicine and family and retiree health care is “extraordinarily complicated.”

Earlier this year, the DHA changed its Tricare pharmacy contract to offer lower reimbursement rates, and about 15,000 pharmacies refused it. They instead chose to leave the network in October. The National Community Pharmacists Association said the rate was so low that pharmacies would lose money dispensing prescriptions to Tricare beneficiaries.

Rep. Buddy Carter, R-Ga., wrote to the DHA in November about his concerns with the pharmacy changes. He said families, particularly those in rural areas and those who rely on specialty pharmacies, voiced concern to him that they would lose access to medication. Others said Tricare was redirecting them to pharmacies that did not exist.

“This decision will severely impact those who serve or have served our country honorably by reducing Tricare patients’ access to quality health care at a time when many receive annual vaccinations,” Carter wrote.

The letter ended with an invitation to a December listening session, which was ultimately canceled because DHA officials declined to attend, according to Carter’s office.

Crosland said she does not shy away from difficult conversations and strives to be clear about what she can and cannot do.

“That's my responsibility,” she said. “I'm honest. I'm transparent. I am more willing to own what I can fix and be honest about what's beyond a priority for me. … There's a finite amount of time and energy and what we want to do is do the greatest good for the entire system.”

Crosland began her career as an Army doctor specialized in family medicine and continued to see patients of all walks of life right up until she became a general officer. Bringing that experience with patients into leadership brings perspective, she said.

“Medicine is a human endeavor. It's a relationship between a clinician and another human being while trying to get them healthy, trying to take care of them,” she said. “I don't think I lost that perspective just because I don't spend time in the exam room anymore.”