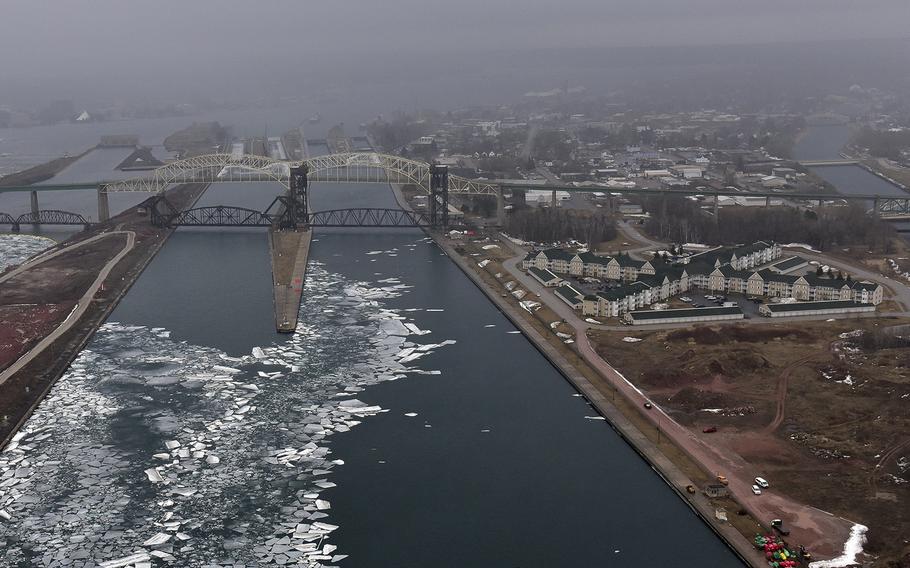 Small amounts of ice accumulate on March 24, 2021, in the approaches to the Soo Locks, operated by the Army Corps of Engineers, in Sault Ste. Marie, Mich. (John Masson/U.S. Coast Guard)

Washington (Tribune News Service) — A defense policy bill released this week includes new spending authorization for the ongoing project to build a new Soo Lock at $3.2 billion, which is triple what it had been expected to cost but should allow construction to stay on track.

The U.S. Army Corps of Engineers had requested the reauthorization this fall, citing record levels of inflation, a “robust” construction workload across the country and a national labor shortage as contributing to the cost increase, as well as modifications to the design to improve safety and operability.

“This allows the project to get done,” Stabenow said. “The most important thing is that there’s a full commitment from the Congress, from the Army Corps of Engineers, from the administration. So it’s not going to be stop-start, which has been of concern to me.”

Roughly $1.585 billion has already been allocated to the project, which would modernize the shipping lock complex on the St. Mary’s River in the Upper Peninsula connecting Lake Superior to the lower Great Lakes. The government has stressed the critical role the shipping channel plays in the North American economy and the nation’s supply chain of iron ore for manufacturing.

Stabenow added that she’s working with the House and Senate appropriations panels to ensure funding for the project is hopefully included in the omnibus spending bill for fiscal 2023.

“We’re working with the House to make sure they have the dollars for this coming year,” Stabenow said. “The great news is the authorization has been increased, and the commitment to get this done is very, very clear.”

The Soo Locks reauthorization is part of a 4,000-page legislative package released this week that includes the annual National Defense Authorization Act, as well as text of the annual water infrastructure legislation.

The House could take up the bill Thursday, followed by the Senate next week.

The bill authorizes $858 billion in defense spending overall, which is about $45 billion more than President Joe Biden had requested. It also would rescind the military’s COVID-19 vaccine mandate and includes an overhaul of sexual assault, harassment and other military justice cases long pushed for by Sen. Kirsten Gillibrand, D- New York.

The package also provides $1.2 billion for cleaning up military sites contaminated by toxic PFAS chemicals, $11 million for PFAS-related research and direction for the Pentagon to phase out purchases of personal protective firefighting equipment containing PFAS, among other provisions related to the chemical linked to well water contamination.

Republican lawmakers applauded the inclusion of a repeal of the COVID-19 vaccine mandate for U.S. troops that they’d long criticized, noting that personnel removed over the vaccine requirement may be reinstated.

“We got a huge win on getting rid of the vaccine mandate,” U.S. Rep. Lisa McClain, R- Bruce Township, said on Fox Business News.

“We also more importantly got language in there that will require us to get data on any service member that was adversely affected because of the vaccine mandate. We don’t know if that is 2,000 people, 5,000 people. So, next Congress when we actually have the gavel, we can double down and make sure we take care of those service members.”

The White House panned the repeal provision, with Press Secretary Karine Jean-Pierre saying “it is a mistake.”

“We think happened here is Republicans in Congress have decided that they’d rather fight against the health and wellbeing of our troops than protecting them,” she said Wednesday.

Rep. Peter Meijer, R- Grand Rapids Township, had been lobbying for the inclusion of a provision to repeal outdated authorizations for the use of military force including an Eisenhower-era one dating to 1957, but it was stripped out. The package also excluded House language to repeal the 2002 and 1991 AUMFs against Iraq that remain on the books but are not currently relied on by the Pentagon.

“There is zero excuse to keep these zombie AUMFs around for a President to abuse,” Meijer tweeted.

The bill included an amendment co-sponsored by Rep. Debbie Dingell, D-Ann Arbor, requiring a report on the humanitarian situation in Lebanon, including food security impacts due to wheat imports affected by Russia’s invasion of Ukraine.

The bill text also addresses the troubled class of warships that includes the USS Detroit. As part of its budget proposal this year, the Navy had proposed saving money by retiring nine total littoral combat ships, including the USS Detroit that was just commissioned in 2016.

The legislation up for consideration would allow the Navy to retire no more than four Freedom-class littoral combat ships, blocking the decommissioning of five others. But the text does not identify by name which ships must be retained or retired — something that the Navy would determine.

Critics say the ships are unreliable and don’t offer the relevant capabilities the U.S. needs to counter China or Russia, though the Navy continues to build more LCSs.

The water portion of the bill would increase the federal cost share for a project aimed at preventing the invasive Asian carp from reaching the Great Lakes, taking it from 80% to 90%. That could help speed up completion of the project at the Brandon Road Lock and Dam in Illinois.