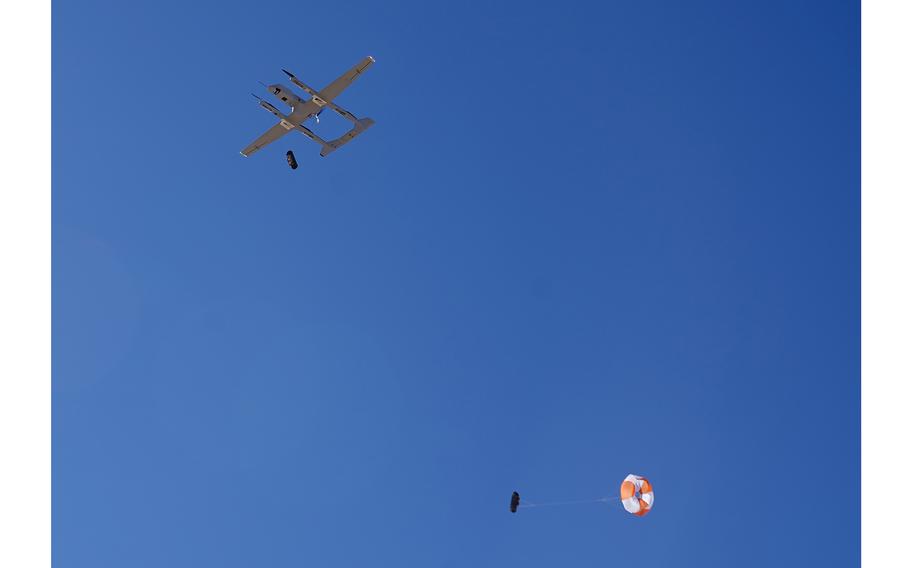 A U.S. Army aerial drone delivers a payload of medical supplies during the exercise Project Convergence 22 at Fort Irwin, Calif., Oct. 28, 2022. The drop was part of Army efforts to find aerial drones that can deliver medical supplies, such as blood, to wounded troops as fast as possible. (Thiem Huynh/U.S. Army)

Army drones are dropping packages of simulated blood over the Mojave Desert in an effort to find better ways to rush medical supplies to wounded troops as quickly as possible.

In recent months, soldiers at Fort Irwin, Calif., have practiced gathering the drone cargo after the supplies drift to the ground, attached to small, orange-and-white parachutes.

Lessons from two decades of war in Iraq and Afghanistan, scenes from Ukraine and fears of future conflicts with countries such as China are driving the efforts, researchers told Stars and Stripes.

“The need is pretty clear: making sure that whole blood is accessible to forward medics,” said Nathan Fisher, chief of medical robots and autonomous systems at the Telemedicine and Advanced Technology Research Center, at Fort Detrick, Md.

Fisher’s medical supply drone, known as Project Crimson, was what flew overhead and dropped off the fake blood at Fort Irwin during a training scenario for a mass-casualty situation.

The exercise ran from late September into November and included medical personnel from the U.S. and Australian armies.

The FVR-90 drone used by the Army can take off and land vertically, and carry up to 22 pounds of temperature-controlled whole blood to troops up to 250 miles away, a TATRC statement last year said.

“This drone supports medical field care when casualty evacuation isn’t an option,” Fisher said in the statement. “It can keep whole blood and other crucial items refrigerated in the autonomous portable refrigeration unit and take it to medics in the field with wounded warriors.”

One of the bitterest lessons learned from 20 years of American wars is the necessity of preventing blood loss on the battlefield quickly, said Air Force Col. Stacy Shackelford, a doctor and chief of the San Antonio-based Joint Trauma System.

The Afghanistan War and the Russia-Ukraine war in particular were on the minds of military medical officials this summer when they developed seven recommendations for improving the Defense Department’s blood supply program, Shackelford told Stars and Stripes.

One recommendation was research into blood delivery by drone, she said.

The U.S. had complete air superiority in Iraq and Afghanistan, and troops relied on the ability to quickly and safely fly the wounded to field hospitals for emergency care. But that might not be possible in future wars with countries that have anti-air missiles and fighter jets, Shackelford said.

“I think it’s going to come down to drone delivery of blood by some type of unmanned vehicle that can fly in and drop off more blood or more bullets, whatever is needed, Shackelford said, in a statement this summer.

Besides speedier delivery, supplying blood to the battlefield by drone has a cost advantage in comparison to using helicopters or training more medics to conduct transfusions under fire, officials said.

The time frame for turning UAVs into flying military blood banks is not all that distant, in the Army’s estimation.

It’s “really just around the corner,” researcher Adam Meledeo said, according to the statement.