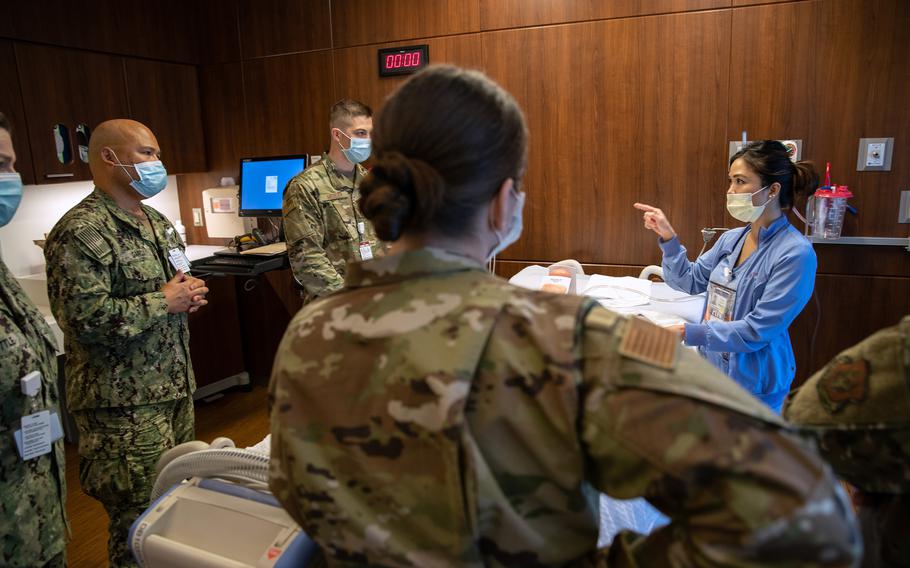 NEWARK, New Jersey (Tribune News Service) — University Hospital in Newark, New Jersey, is besieged with COVID-19 patients packing its intensive-care unit, where rooms have been improvised from plastic sheeting and staff have fallen victim to the disease. The U.S. Army is reinforcing its defenses.

Capt. Jamie Dowd, a nurse who has treated ghastly trauma in Syria and Iraq, was sent to the hospital on a 30-day mission with 24 other troops to help fight the worst wave of COVID-19 cases since the deadly spring of 2020. Plucked from Fort Polk in Louisiana, Dowd last week peered out from the shadows of a room in the Newark progressive-care unit.

“We’re fighting COVID like it’s our enemy in battle,” said Dowd, standing before the officer in charge as he conducted his morning rounds. Behind her, an elderly patient lay, eyes closed, hooked up to machines that translate vital signs into an eerie melody.

Hospitals are overwhelmed and understaffed after the raging omicron variant swept the U.S. over the holidays. Though the variant doesn’t appear to cause more severe cases, it’s infected more people than any other wave. As of Friday, more than 2,400 people remain hospitalized for COVID-19 across New Jersey. Though that's a large improvement from more than 6,000 just weeks ago, it's triple the number before Thanksgiving.

To ease the burden, the federal government last month sent military doctors, nurses and other medical personnel to hospitals across six hard-hit states that requested support. From New Mexico to Rhode Island, 1,400 troops are taking position in languishing facilities.

“When you need something done, call on the military,” President Joe Biden said at a press conference last month.

University Hospital is New Jersey’s only public acute-care hospital, and has the state's busiest emergency department. Twelve miles west of Manhattan, Newark is a fallen industrial giant with a resurgent downtown core, but neighborhoods beset by deprivation and disease. Of its 312,000 residents, about 27% live in poverty and 19% of those under 65 lack health insurance, according to the U.S. Census.

The community that the hospital serves is among the most vulnerable to COVID-19: Many are essential workers, live in close quarters or multigenerational households, have underlying conditions or qualify for Medicaid. Eight-in-10 are people of color. As a so-called “safety net” hospital, University sees patients regardless of insurance status — up to 15% receive charity care.

When COVID-19 assailed the U.S. in April 2020, New Jersey was one of the places hit first and hardest. In University Hospital, the dead were doubled up on stretchers and diverted from the overflowing morgue to a nearby medical school, kept cold alongside cadavers awaiting dissection. “We haven’t really had a surge like that until recently,” said the hospital’s chief executive officer, Shereef Elnahal.

Omicron tore through New Jersey after Christmas, with the weekly average of COVID cases in Essex County, which encompasses Newark, peaking Jan. 5. Elnahal knew the hospital’s own crisis was yet to come as the workers themselves absorbed the viral wave. “The key difference is that now it’s more of a staffing issue than a clinic acuity issue,” he said.

By the second week of January, one-third of the clinical staff was out sick with COVID-19 or at home caring for family. The same disease that was keeping them out of the facilities had left 150 patients bedridden within.

When Major Marshall Glenister arrived with his medical team on Jan. 20, University’s remaining staff greeted them in the outdated lobby with cheers. After an orientation, Glenister worked with civilian administrators to deploy the troops throughout the hospital’s hardest-hit units.

On Jan. 28, as snow began to descend, hospitalizations were also falling. Seventy-two COVID patients were bedridden, and among them, 16 were on ventilators. The soldiers walked down halls in combat boots, or typed at computers in windowless conference rooms, patrol caps off and nestled among the cords. Glenister, a nurse with advanced anesthesia skills, began his rounds alongside Elnahal. He addressed the CEO with yessirs and thank you, sirs that would have given away his Army background if the green camouflage hadn’t already.

Rounding a bend into the progressive-care unit, Glenister greeted Dowd, who had traded fatigues for scrubs. For the past week, she had commuted from the West Orange hotel where the troops stay to work 12-hour shifts — a few days on, a few days off — in a unit where patients are under constant electronic heart monitoring.

Other troops were in the emergency department and intensive-care units, plugging gaps, particularly among the skeleton night crew. The shortest-staffed teams were also reinforced with what the hospital calls “crisis care workers,” a fancy title for medical and nursing students.

The soldiers integrated themselves quickly, said Ana Gehan, University Hospital’s assistant director for nursing and the emergency department, which had been assigned seven. When a patient’s heart stopped, “the military was right there,” she said, “They jumped in, hand-in-hand with our staff, on their first real day on the job.”

The troops helped in quieter ways. The emergency department was even more chaotic than usual. Physicians shuttled patients around on gurneys. Nurses took on sanitation duties. “Patients just want to be cared for,” Gehan said. “Having the military here gives us the opportunity to spend a little bit of extra time with them.”

University Hospital is better equipped to treat COVID-19 patients than the last time it faced a wave of this scale. Doctors and nurses have sufficient personal protective equipment, an arsenal of drugs and techniques to stabilize patients. There are 360 beds ready to be used — and the U.S. Army Corps of Engineers has just arrived to outfit the hospital for more. In a nearby parking lot, the National Guard watches over refrigerated tractor-trailers, a buffer should the morgue fill up again. Yet morale among civilian medical staff remains low.

“I used to be able to paint a light at the end of the tunnel,” said Elnahal, who was New Jersey’s health commissioner before taking over the hospital in August 2019. “Now, people roll their eyes when I try.”

Drivers no longer honk when they pass University Hospital, and the 7 p.m. cheers stopped erupting from the neighborhood long ago. Worst, health-care workers are grappling with the knowledge that many patients they see could have avoided this: Most are unvaccinated.

Andrew Berman, director of pulmonology and critical care medicine, said the troops brought energy and helped “put out the fires.” They don’t provide a permanent solution. In less than a month, they will depart.

Out of sight behind Berman, in the depths of the ICU, a soldier worked with a Covid patient. When Glenister approached, he informed the officer in charge that he was too busy to be interviewed. A new patient was rolled in, unconscious and with his bare feet exposed. Resting on the gurney against the man's legs was a small brown suitcase. Someone, somewhere, thought he might stay awhile.