B-21 Raider: US military ready to unveil first new bomber of 21st century 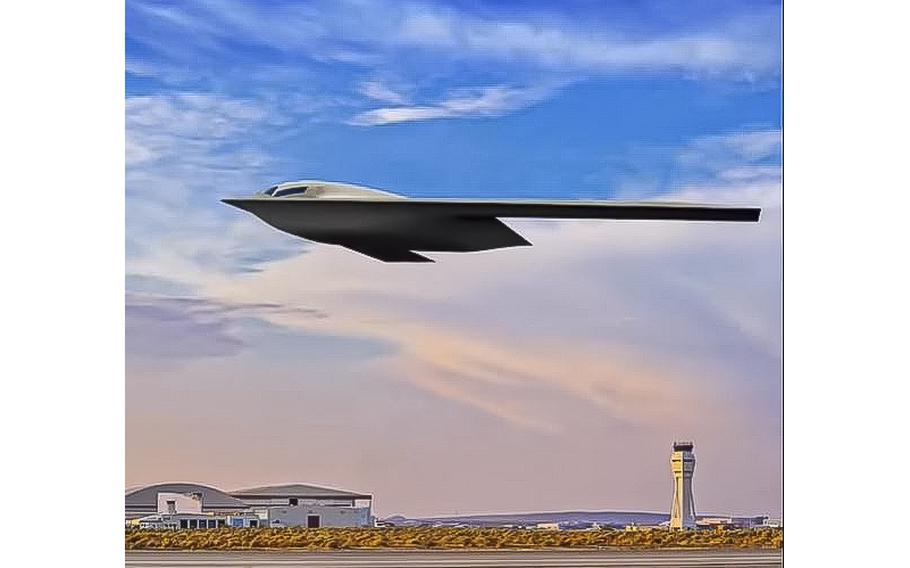 A screen grab from a DOD video posted in November 2022, shows a B-21 Raider. (Defense Department)

WASHINGTON — Defense Secretary Lloyd Austin will travel to Southern California on Friday for the unveiling of the first new American bomber of the 21st century — the B-21 Raider, a long-range stealth aircraft that’s been in the works for more than a decade.

“The B-21 is the most advanced military aircraft ever built and is a product of pioneering innovation and technological excellence,” Doug Young, sector vice president and general manager for Northrop Aeronautics Systems, said in a statement.

Austin will attend the unveiling ceremony at the Air Force’s Plant 42 in Palmdale, Calif., located about 40 miles north of downtown Los Angeles.

The B-21 is the result of the Air Force’s Long-Range Strike Bomber program and is able to fly intercontinentally and drop conventional and thermonuclear weapons. Started in 2009, the aim of the program was to produce a more technologically advanced strategic bomber to eventually replace the B-52 Stratofortress and the B-1 Lancer — bombers that were introduced in the 1950s and 1970s, respectively.

The B-21 is the Pentagon’s second stealth bomber in history after the B-2 Spirit, which entered service in the late 1990s.

“The B-21 will form the backbone of the future Air Force bomber force,” the Air Force said in a statement. “Designed to operate in tomorrow’s high-end threat environment, the B-21 will play a critical role in ensuring America’s enduring airpower capability.”

When the B-21 Raider is unveiled Friday, it will be the first time a sixth-generation aircraft is seen in public anywhere in the world, according to Northrop Grumman Aeronautics Systems, which designed and built the bomber.

The Raider will feature highly advanced systems — most of which remain classified — and is built with open architecture, which will allow “rapid upgradeability” for future technologies. It’s also being described as a “digital bomber,” which means it’ll use “agile” software platforms and digital engineering tools, officials said. At least six B-21 Raiders are in production so far and the first is expected to fly within the next several months. Originally, the Air Force said it expected the first flight in mid-2022, but that was pushed back to sometime in 2023. However, Air Force officials have said the new bomber remains on schedule and under budget.

Whenever the new bomber does take to the skies, it’s expected to give the United States a significant advantage in long-range precision strike capability with its global reach.

“Our current bomber force is old,” retired Air Force colonel and former B-1 weapons systems officer Chris Brunner said during a podcast of the Mitchell Institute for Aerospace Studies, an independent research group that studies aviation-based national security issues. “It’s time to move on to the next evolution of long-range strike that is required to get into those environments like Russia and China.”

The preliminary stages of the B-21’s eventual development occurred in 1999 when the Air Force studied its bomber fleet and found the service would probably need a new bomber sometime before 2030. About a decade later, the Air Force began looking for a contractor to helm the project.

In 2015, Northrop was chosen over a joint proposal from Boeing and Lockheed Martin, two well-established aerospace companies that eventually protested the decision over concerns that the Pentagon’s selection process was “flawed.” A subsequent independent government investigation dismissed the Boeing-Lockheed complaint.

Each B-21 Raider should cost about $700 million, military officials said, and the first bombers are expected to enter service in the next four or five years. The Air Force is expected to order more than 100.

According to a 2023 budget overview, the Air Force anticipates spending $20 billion to produce the new bombers between now and fiscal 2027. Another $13 billion is expected to go to research and development during the same time, for a total of about $32 billion in six years.

The Pentagon has already said Ellsworth Air Force Base in South Dakota will host the first operational unit and training center for the B-21. Edwards Air Force Base in California is leading the plane’s testing and evaluation.

Military officials settled on calling it the Raider as an homage to the famous Doolittle Raiders — a group of American pilots in World War II who carried out an aerial sneak attack on Tokyo in April 1942.

“The courageous spirit of the Doolittle Raiders is the inspiration behind the name of the B-21 Raider,” Northrop said in a statement. Airmen of the U.S. Army Air Forces, led by Lt. Col. James Doolittle, carried out a raid on military targets at Tokyo, Yokohama, Yokosuka, Nagoya and Kobe on April 18, 1942. The World War II attack was coordinated between the Army Air Forces and the U.S. Navy, which transported the 16 B-25 medium bombers aboard the carrier USS Hornet to within take-off distance of the Japanese Islands. (U.S. Air Force)

Though the B-21’s specifications are being kept under wraps, some experts in recent years have identified certain capabilities and systems that any sixth-generation bomber will need to succeed in modern warfare.

“It’s going to be hardened against nuclear weapon effects and designed with the appropriate wiring and nuclear safety and security components if it’s to be nuclear capable,” retired Air Force colonel and former B-52 pilot Mark Gunzinger told the Mitchell Institute podcast about the aircraft’s likely features.

“I think of the B-21 more as a matter of integration than it is an invention,” he added. “Everything we have heard from the Air Force indicates that is now a success story, that B-21 is on track, on time and on cost.”

“It’s going to be incredible just because of where it can go and the capabilities it has,” Brunner said. “The B-21 is going to be a great success.”