Many mainstays of US airpower miss the mark for being mission capable, GAO finds All branches of the military are falling far short when it comes to keeping an array of war planes and attack helicopter fleets “mission capable,” according to a new government watchdog report.

Among 49 aircraft types that were assessed, only two met their operational goals in 2021, while the others were plagued with various maintenance difficulties that hindered operations, the Government Accountability Office said in a report issued Thursday.

Many of the aircraft assessed are among the military’s best-known and are central to American airpower. The report did not offer recommendations to address the readiness shortfall.

Only four of the aircraft the GAO reviewed met mission capable goals in a majority of years during the 10-year analysis period. The four are the Air Force’s B-2 bomber, RC-135S-W reconnaissance plane and UH-1N Huey helicopter, and the Navy’s EP-3 reconnaissance plane. A B-2 Spirit bomber performs touch-and go training at Whiteman Air Force Base, Mo., in 2020. The B-2 was one of only four military aircraft that met mission capable goals, the Government Accountability Office report. (Alexander Riedel/U.S. Air Force)

“According to officials, a number of sustainment challenges including aging aircraft, maintenance challenges, and supply support issues account for this decrease in mission capable rates,” the GAO said.

Set by the services, mission capable rates are defined as the percentage of total time when the aircraft can fly and perform at least one mission. The metric is used to assess the health and readiness of an aircraft fleet.

The GAO found that between 2011 and 2021, 26 aircraft did not meet their annual mission capable goal in any fiscal year. Moreover, mission capable rates steadily declined for most aircraft during that period, it found.

While mission capable rates for selected aircraft have fallen for the Air Force, Navy and Marine Corps, the Army has seen its numbers improve even if still falling short of goals, the report found. 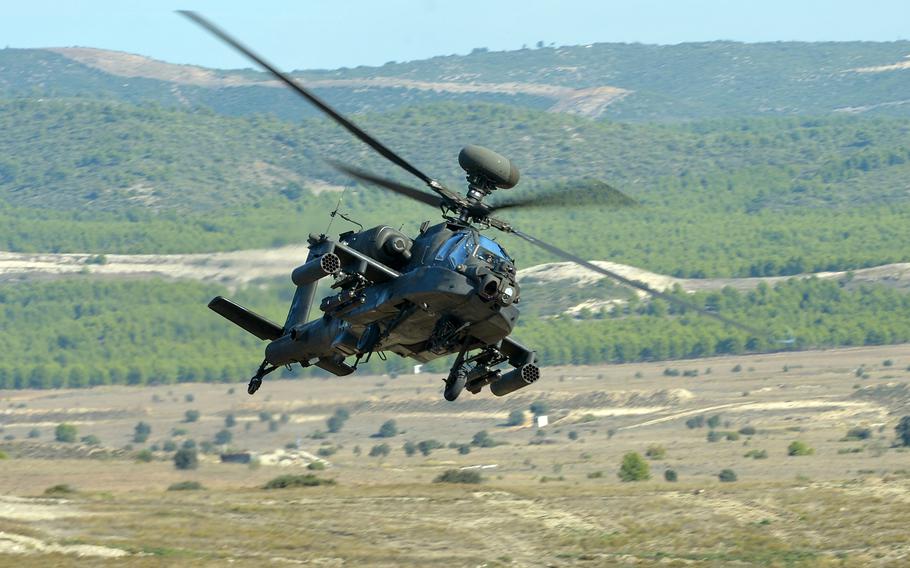 A U.S. Army AH-64 Apache helicopter flies over the San Gregorio training area near Zaragoza, Spain, during a NATO exercise in 2015. The Apache is one of many military aircraft that did not meet mission capable goals, according to a Government Accountability Office report issued Nov. 10, 2022. (Michael Abrams/Stars and Stripes)

The GAO report came at the behest of Congress, which called on the agency to assess aircraft operation and support costs in relation to mission readiness.

Overall, operating and support costs totaled about $54 billion in fiscal year 2020 for the reviewed aircraft, a decrease of about $2.9 billion since 2011 after factoring in inflation, the GAO said.

Meanwhile, maintenance costs became a larger portion of operating and support, increasing by $1.2 billion since 2011. Such trends have largely been driven by changes in the size of aircraft inventory and reduced flying hours, the GAO said.