B-1 bombers deploy to Guam for second time this year 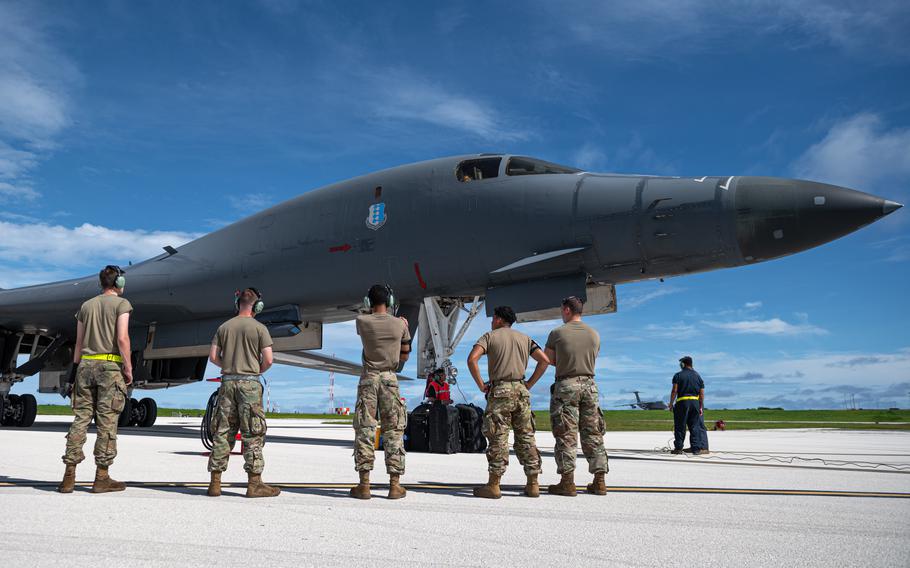 Air Force B-1B bombers from South Dakota arrived in Guam recently, marking the second time this year that Lancers have deployed to the American territory.

The planes, assigned to the 37th Expeditionary Bomb Squadron at Ellsworth Air Force Base, arrived Tuesday at Andersen Air Force Base to conduct a Bomber Task Force mission, the service said in a news release Thursday.

The Air Force declined to specify how many bombers were deployed, citing operational security.

Bomber task force missions are intended to demonstrate the aircraft’s “ability to rapidly deploy anywhere, anytime, and provide lethal precision global strike options for combatant commanders,” according to the release.

Four Lancers deployed to Guam in June for a similar mission.

Their sorties included aerial integration with the Japan Air Self-Defense Force and a refueling operation with the Royal Australian Air Force at RAAF Base Darwin.

In recent years, the Air Force has routinely deployed B-1 and B-52 bombers to Guam — but timetables for arrival and departure are not publicized in advance.

Four B-52 bombers and more than 220 airmen deployed to Andersen in February.

Guam is key to U.S. power projection in the Indo-Pacific and is home to critical military installations such as Andersen and Naval Base Guam. Still under construction, Camp Blaz will be the permanent station for about 1,300 Marines, with another 3,700 expected to rotate through.

In an outright conflict with China or North Korea, the island would function as a crucial forward operating base for U.S. forces.

With that in mind, the Pentagon’s proposed budget for 2023 includes almost $1 billion in funding for a missile-defense system for Guam.

The bomber task force missions are intended in part to train airmen to respond to such crises in tandem with allies and partners, the Air Force said.

“Not only does it provide our B-1 aircrew invaluable training opportunities with important Allies and partners, but it also signals our nation’s unwavering support to them,” Col. Joseph Sheffield, 28th Bomb Wing commander, said in the news release.

The missions also deter potential adversaries and challenges their “decision calculus,” he said.