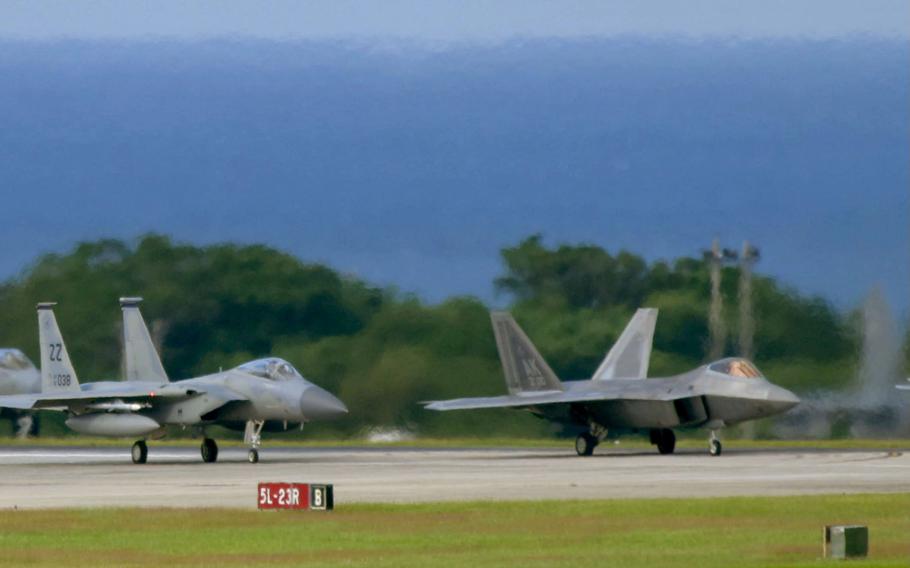 The succession of launches was designed to test Kadena’s “ability to generate airpower quickly" to defend Japan and promote "regional peace and security,” the 18th Wing said in a Monday statement announcing the drill.

The demonstration came on the heels of criticism from some defense experts and a group of U.S. lawmakers who railed against replacing permanently based fighters with a rotational set.

“Anytime we're showcasing our air power, part of that is about reassuring our allies that we’re capable and we're credible,” 18th Wing spokesman Lt. Col. Raymond Geoffroy told Stars and Stripes as the aircraft assembled on the runway. He said Tuesday’s exercise “definitely” took on added significance due to the transition from Eagles to Raptors and having both aircraft on hand. 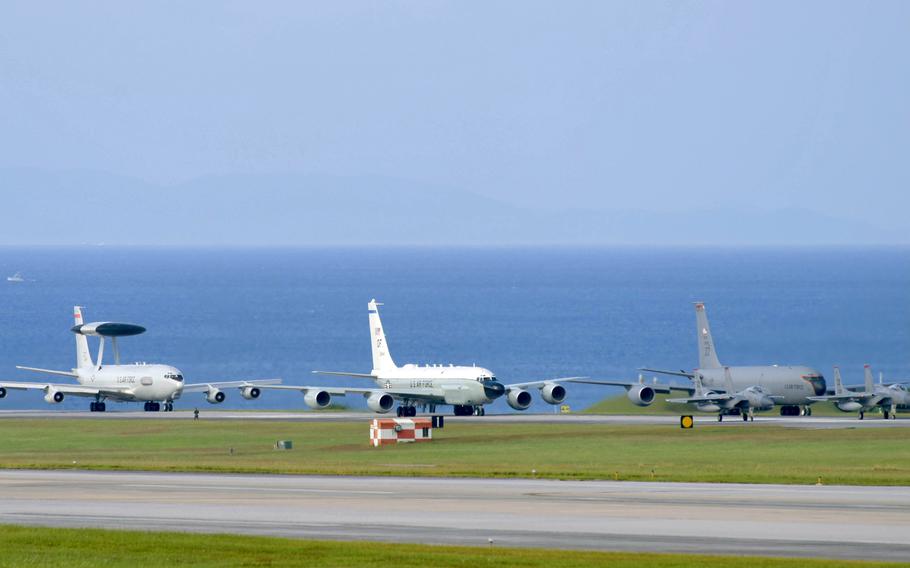 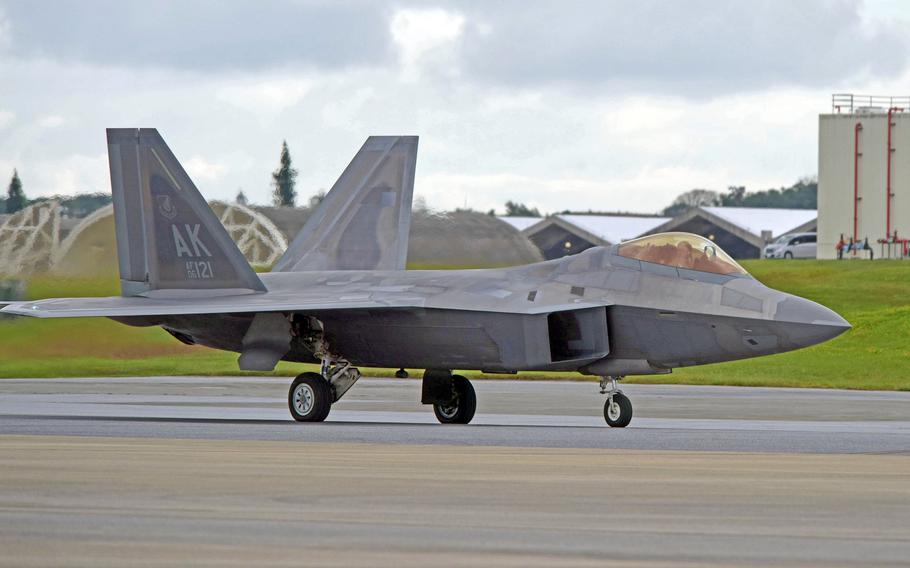 There are approximately 50 F-15s still on Okinawa, Geoffroy said. He put the number of Raptors at about a dozen. A spokesman from the Okinawa Defense Bureau, which represents Japan’s Ministry of Defense on the island, speaking to Stars and Stripes by phone Tuesday, said there are 14.

Some government officials in Japan speak to the media on the condition of anonymity as a requirement of their employment.

The plan to replace Kadena’s two F-15C/D squadrons caused a stir when it was leaked to the press in the Financial Times on Oct. 27.

The "phased withdrawal" will take place over the next two years. The Eagles – at least initially – are being replaced by F-22 fifth-generation stealth fighters on six-month rotational deployments. 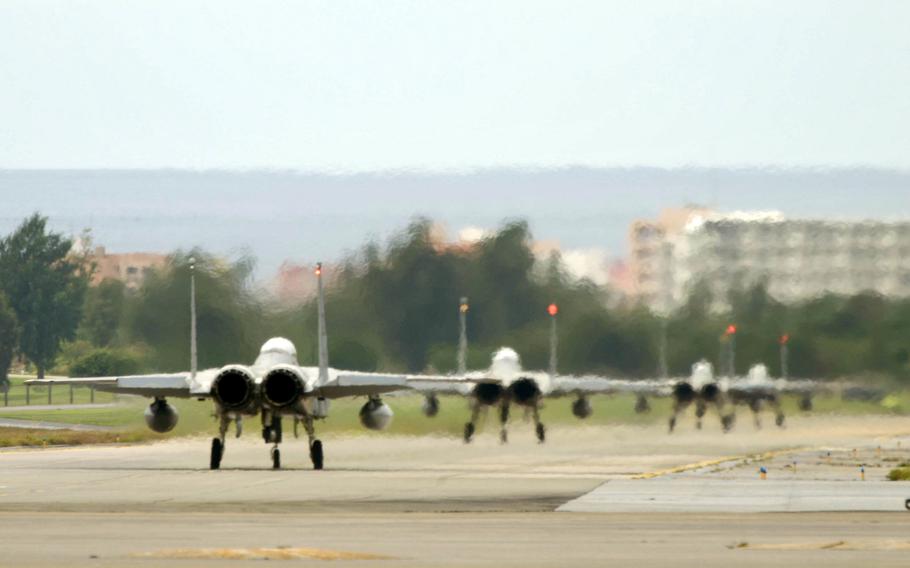 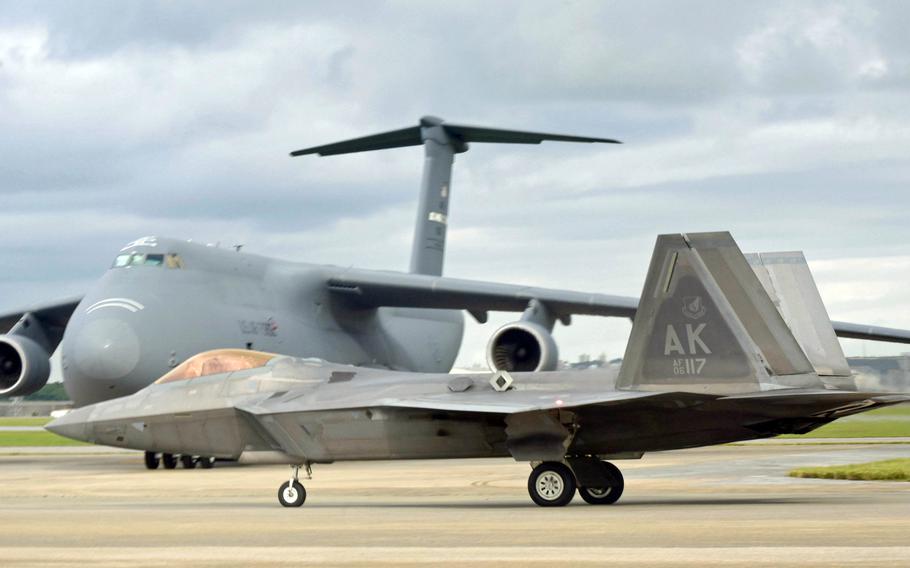 The first of these aircraft arrived Nov. 4 from the 3rd Wing at Joint Base Elmendorf-Richardson, Alaska. There will be no gaps in fighter coverage, according to the 18th Wing.

It's unclear if the rotational presence will be temporary or an interim measure until a new generation of fighters is positioned permanently on Okinawa, Ralph Cossa, president emeritus of the Pacific Forum think tank in Hawaii, told Stars and Stripes in an email Oct. 28.

Critics have said the move sends the wrong message to China and to U.S. allies in the region.

The group agrees with modernization but is concerned there will be a "tangible reduction in American forward combat power" with no permanent fighter presence, the letter said.