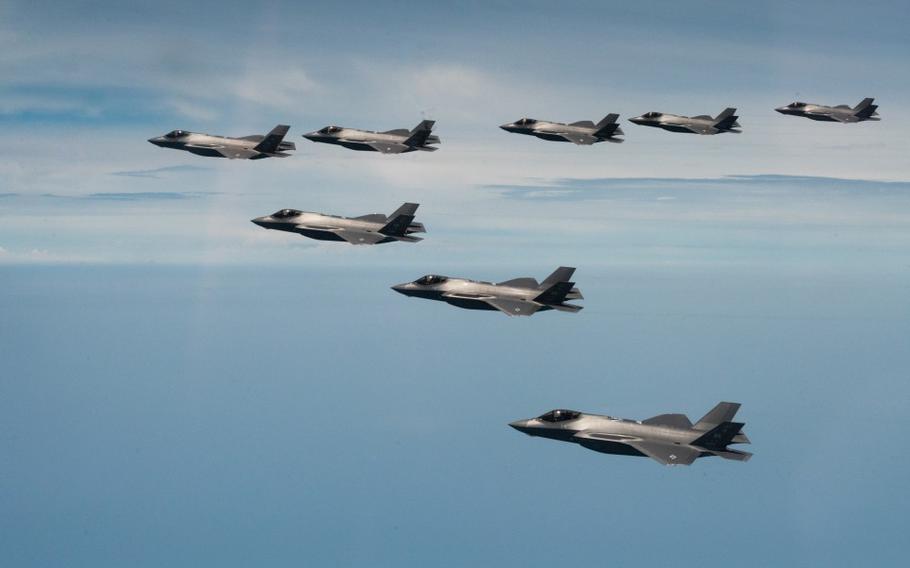 At least 14 South Korean aircraft, including the F-35A, F-15K, KF-16 and FA-50, participated in drills over South Korea, according to a news release from the Ministry of Defense on Thursday.

No ordnance was dropped from the aircraft during the exercise, Jeter said.

The two countries held the exercise “to improve capabilities in conducting combined operations through live environment training” and boost collaboration between the stealth fighters, the Defense Ministry said.

The aircraft practiced attack formations and air intercepts after being split by simulated friendly and enemy forces, according to the release.

The South Korean military purchased roughly 40 F-35s from the U.S. in 2014 and took its first delivery of the aircraft in 2019.

The drill marks the first time F-35s from both countries have flown together, although South Korea’s stealth fighters have exercised with other U.S. aircraft.

The latest air combat drill comes nearly two months after President Joe Biden and South Korean President Yoon Seok Youl met for the first time and agreed to bolster their military ties. Yoon, during a press conference in May, said the two countries were “going to step up our exercises.”

North Korea has conducted 17 rounds of missile tests so far this year and continues to lambast the U.S. and South Korea through its state-run media. In a statement by the Ministry of Foreign Affairs on Tuesday, North Korea described the U.S.-South Korea drills as “reckless military provocations” and said the F-35’s goal was to “destroy the key targets” of its country.