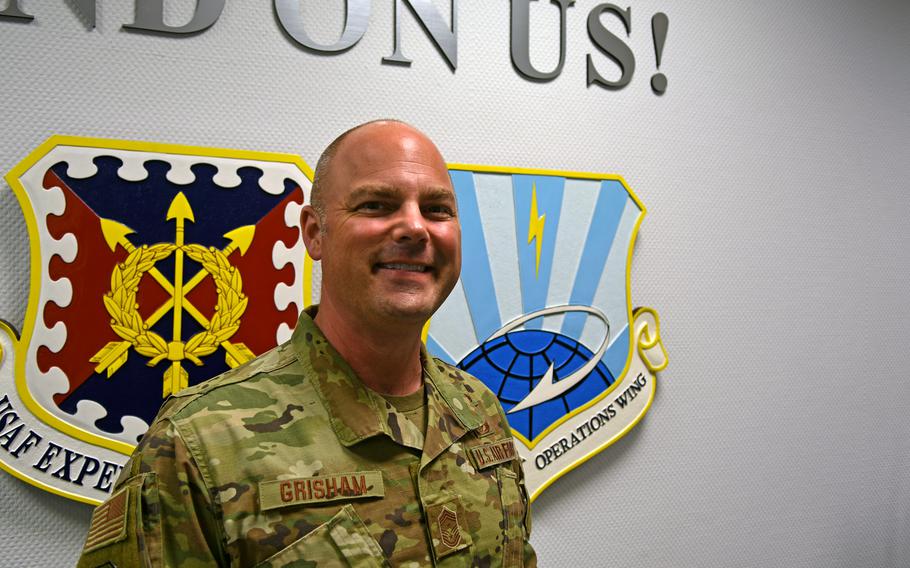 Chief Master Sgt. Jeremiah Grisham, the command chief of the 521st Air Mobility Operations Wing at Ramstein Air Base, Germany, on June 14, 2022. Grisham hopes his experience of serving in the Air Force for more than 20 years as a gay airman can reassure and inspire other LGBTQ military personnel. (Jennifer H. Svan/Stars and Stripes)

RAMSTEIN AIR BASE, Germany — Chief Master Sgt. Jeremiah Grisham walks through base housing every evening with his husband and his dog.

But 15 years ago, Grisham never imagined he’d be where he is today: the top enlisted leader for the 521st Air Mobility Operations Wing at Ramstein. As far as he knows, he’s the only openly gay command chief in the Air Force.

Until 2011, when the repeal of the military’s “don’t ask, don’t tell” policy took effect, openly gay and lesbian people were barred from serving in the U.S. armed forces.

“I didn’t really have a plan to make chief, let alone command chief,” Grisham told Stars and Stripes. He shared his story during Pride Month, which is observed in June.

Grisham, 42, came out to his military friends in explosive ordnance disposal and to his supervisors when he was a senior airman about 20 years ago.

His sexual orientation “became a little bit of a joke” among the rough-and-tumble EOD crowd, but nobody “really cared,” Grisham said. The tight-knit EOD community was “willing to close ranks and protect,” he added.

“I never felt in danger of being outed to somebody who could impact my career,” Grisham said.

Nor did being gay hinder his advancement opportunities in his 20-plus years in the Air Force. Gay and lesbian service members have largely found acceptance in the military, he said.

However, that’s not the case for bisexual, transgender and queer armed forces personnel, Grisham said.

“There’s still some fear of those communities because there’s not a clear understanding of who they are, and so we don’t appreciate fully what they can bring to the fight,” he said. 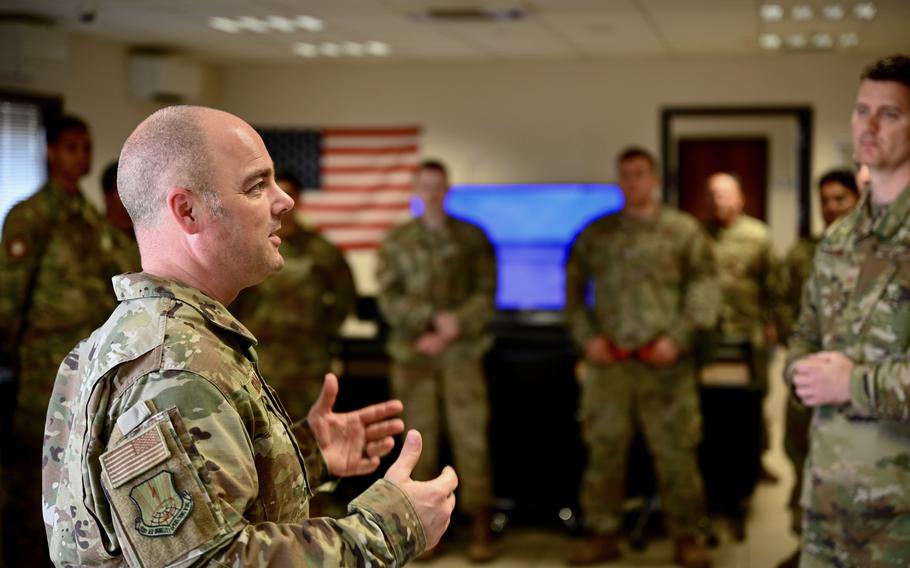 Chief Master Sgt. Jeremiah Grisham, 521st Air Mobility Operations Wing command chief, speaks with airmen of the 728th Air Mobility Squadron at Incirlik Air Base, Turkey, on May 3, 2022. Grisham, as far as he knows, is the only openly gay command chief in the Air Force. (Emma Quirk/U.S. Air Force)

Grisham offered a message of hope to those who still feel marginalized.

“I have experienced change in my lifetime,” he said. “I have been in the Air Force from the time when it was impermissible to say who you are and love who you need to love in this life, and I have landed in a place in life where I can do all of those things.”

But he acknowledges that there’s work to be done, and he feels compelled to speak out to counter messages that he regards as hateful.

The rhetoric surrounding the cancellation of a drag queen story hour for children at the Ramstein library earlier this month is one such example for him.

After the planned event was chronicled by a right-wing news magazine based in Canada, base leaders hastily announced that it would not happen because organizers publicized it before official approval had been granted.

U.S. Sen. Marco Rubio, a Florida Republican, sent a letter calling for an Air Force investigation and discipline for the event planners. His office issued a press release touting the cancellation following his “demands.”

Lt. Col. Will Powell, a spokesman for the 86th Airlift Wing at Ramstein, subsequently said the reason the base canceled the drag queen reading was that leaders wanted a Pride Month event that was more inclusive for LGBTQ personnel and families.

He added that the decision “was not based on individuals speaking out against the event.”

In Grisham’s opinion, though, the controversy did lead to something positive. He said a planning committee at Ramstein is developing “a road map where we can continue to have (Pride) events, maybe partner with other special observance months throughout the year,” with the goal “to educate and celebrate.”

Pride Month events still to come include the 86th Airlift Wing Dental Squadron’s 5K color run Saturday on base and a “Proud Voices” question-and-answer panel put on by the KMC Pride Committee, a base official said. Details of the latter are still being worked out.

“All of us have a responsibility to let an airman junior to us see themselves through us,” Grisham said.

And he encouraged all airmen to embrace who they are.

“For some people that’s a taller mountain,” he said. “But don’t shy away from it.”