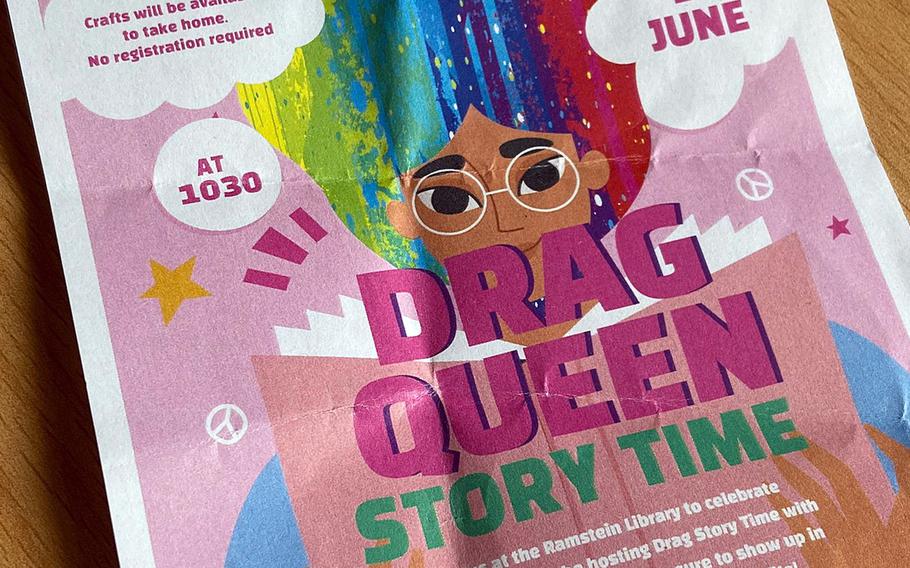 A poster for the Drag Queen Story Time event that was to be hosted by the Ramstein Air Base library Thursday but was canceled by the base’s 86th Airlift Wing, (Stars and Stripes)

An event involving a drag queen reading to children at the Ramstein Air Base library in Germany was abruptly canceled by base authorities, sparking protests that the decision demonstrates a lack of support by the military for the LGBTQ community.

Drag Queen Storytime had been slated for Thursday in honor of Pride Month, which is observed in June.

A flyer announcing the program proclaimed: “Join us with special guest reader Stacey Teed! Be sure to wear your brightest and most colorful outfits!”

But the program was nixed by the 86th Airlift Wing, as was a separate drag karaoke event scheduled to be held at the base enlisted club, according to community members posting on social media sites.

The 86th Airlift Wing did not immediately respond to a request for comment from Stars and Stripes.

In a statement to right-wing media portal The Post Millennial, the wing said the storytelling had been canceled because an advertisement was posted to the base library’s social media page before official approval of the event.

“The advertisement has been removed and the event will not take place,” the wing said in a statement. “Ramstein leaders strive to foster a culture based on inclusion where all people are treated with dignity and respect, regardless of their political views, color of their skin, or sexual orientation.”

The Post Millennial is a conservative online news magazine based in Canada whose editorial staff includes Andy Ngo, an American known for crusades against antifa activists.

The cancellation of the drag queen book reading drew mixed opinions from the Kaiserslautern Military Community, which encompasses Ramstein.

With tens of thousands of Defense Department personnel and their families, it is the largest U.S. military community overseas.

An opponent of the wing’s decision launched a petition at www.change.org to try to get the event reinstated.

“Now more (than) ever we need to show our support to our enlisted members and spouses in the face of blatant discrimination,” wrote the petition organizer, named Natalie Oyer, who described herself as spouse to a transgender wife.

“I don’t know if anything can bring back the events though,” Oyer wrote. “Most of the queens are enlisted.”

Another person suggested in a post on the Facebook page of a local military spouses group that community members organize an off-base event, such as “a drag picnic and story time in the park.”

But others in the military community took issue with the very idea of a drag queen storytelling event, which they deemed inappropriate for children.

An Air Force spouse told The Post Millennial, which first reported the controversy, that she was shocked to learn of the event.

“I find it wholly inappropriate that the MILITARY of all places will be using public funds to sexualize children,” she told the Post Millennial.

The 86th Air Wing said that Ramstein has “established processes” for approving such events and that in the future it will make sure such activities are “properly reviewed and approved prior to advertisement.”