Air Force Master Sgt. Chris Jones, head operations sergeant for the 379th Security Forces Squadron, leads a cheer for the crowd at a ceremony in Al Udeid Air Base, Qatar, April 22, 2022. The event marked 20 years since the unit was reactivated. (J.P. Lawrence/Stars and Stripes)

AL UDEID AIR BASE, Qatar — The mission of the Air Force’s largest expeditionary wing increasingly has turned to helping partner nations combat threats posed by Iran and regional militia groups, 20 years after it was reactivated to fight terrorism in the Middle East.

At a recent anniversary celebration, the wing reflected on the experiences of the past 20 years. The look back took place against a backdrop of an immense construction project that highlights a transition for both the unit and its host country. 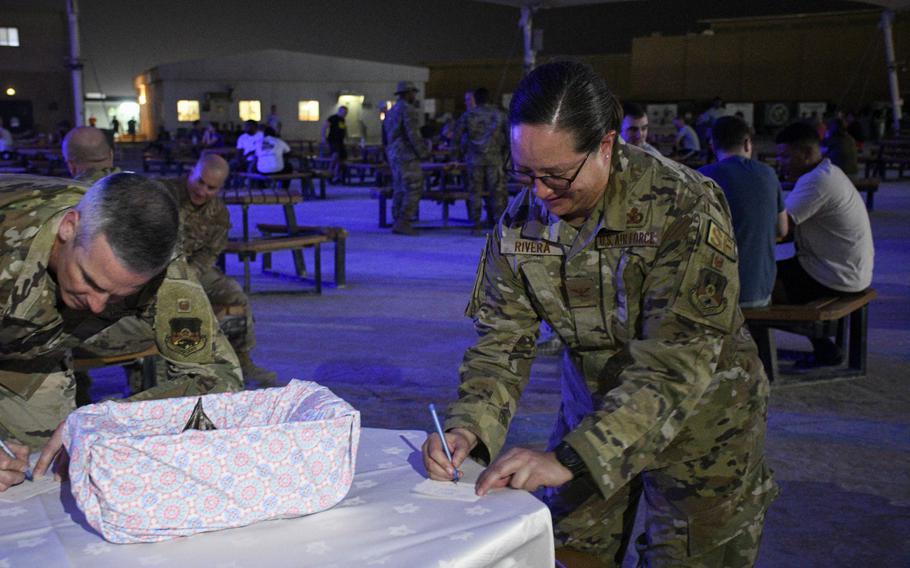 U.S. Air Force Col. Amy Rivera, director of staff at the 379th Air Expeditionary Wing, writes a message to be placed inside a time capsule at a ceremony in Al Udeid Air Base, Qatar, April 22, 2022. The time capsule marked the 20th anniversary of the unit’s reactivation. (J.P. Lawrence/Stars and Stripes) U.S. Air Force Col. Amy Rivera, director of staff at the 379th Air Expeditionary Wing, shows a card she wrote on April 22, 2022, to commemorate how she deployed to Al Udeid Air Base, Qatar, two decades apart. (J.P. Lawrence/Stars and Stripes)

“The relationships that we built over the last 20 years point to our future,” wing commander Brig. Gen. Gerald Donohue told Stars and Stripes on Friday. “When our partners need our assistance to get after combating threats to them, they know we’re on their side.”

The unit of 8,000 airmen is a direct descendant of the 379th Bombardment Group, which gained fame during World War II. It was revived in April 2002 to provide airpower for the Global War on Terrorism.

Donohue noted that Qatar is funding a multibillion-dollar expansion at Al Udeid. He also pointed to the recent deployment of American F-22 fighter jets to the United Arab Emirates, after Houthi militants in Yemen launched missile and drone attacks into the country.

Donohue’s comments come as the U.S. attempts to focus on preparing for a possible conflict with China and helping Ukraine defend itself against Russian invaders. With the end of the Afghan war and the drawdown of a coalition mission in Iraq, the Middle East has receded from public view, but its conflicts remain.

Iran and the groups it supports are launching drone or missile attacks every day, said Guillot, and the U.S. will need to reassure Saudi Arabia, Qatar, the UAE and other partners that it intends to back them.

“We show that through not only our combat actions but also by performing defensive postures with the partner nations’ exercises,” Guillot said, according to a transcript of the talk.

A campaign involving surveillance and other measures also is being conducted in Afghanistan from “over the horizon,” Army Gen. Frank McKenzie, commander of Central Command, told Congress in March. 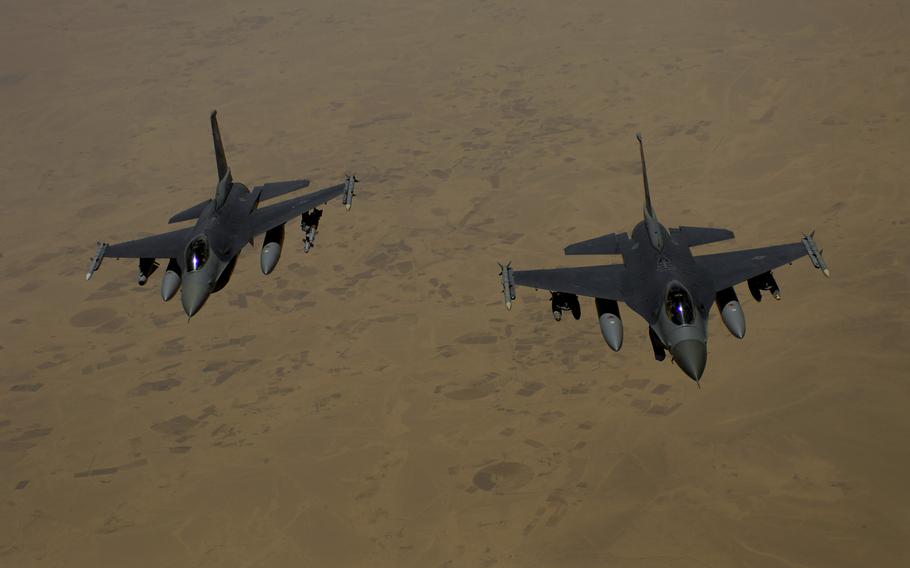 Two U.S. Air Force F-16 Fighting Falcon aircraft fly over Iraq on a mission June 10, 2008, after refueling. The U.S. relied on the 379th Air Expeditionary Wing in Al Udeid, Qatar, for air power in the Middle East and central Asia since the unit was reactivated in 2002. (Andy Dunaway/U.S. Air Force)

Previous discussions of activities originating from afar focused on bases in the Persian Gulf region such as Al Udeid. The sprawling U.S. base now buzzes with construction.

The Qatar Emiri Corps of Engineers is in charge of carrying out the multibillion-dollar project, which will transform temporary buildings on the base into more permanent concrete structures.

For a long time, Qatar avoided drawing attention to the large American base on its soil because of sensitivities among citizens about the U.S. military footprint, said Michael Kugelman, deputy director of the Asia Program at the Wilson Center in Washington.

But officials in Doha now tout the American presence and are happy to finance the facelift of a base that deepens Qatar’s partnership with the U.S., Kugelman said.

While the emirate has long maintained ties with the U.S., outreach efforts intensified after disagreements with its neighbors over the last decade.

Qatar maintains ties with a wide range of actors who are often at odds with each other, including some Sunni Islamists, Iran and groups it backs, and Israeli officials, Kugelman said.

Saudi Arabia, the UAE, Bahrain and a few other governments severed relations with Qatar in 2017 in protest of its foreign policies, leading to an economic blockade that was only lifted this year.

Resentments remain between Qatar and its neighbors, all of whom also are U.S. allies, a recent Congressional Research Service report said.

“Any deepening ties between Qatar and the U.S. military will contain a degree of risk,” Kugelman said, adding that the U.S. wants bases in the Gulf as launching pads for counterterrorism operations.

“The U.S. may have ended 20 years of combat operations, but it certainly hasn’t lost its desire to maintain a strong capacity for power projection,” he added.