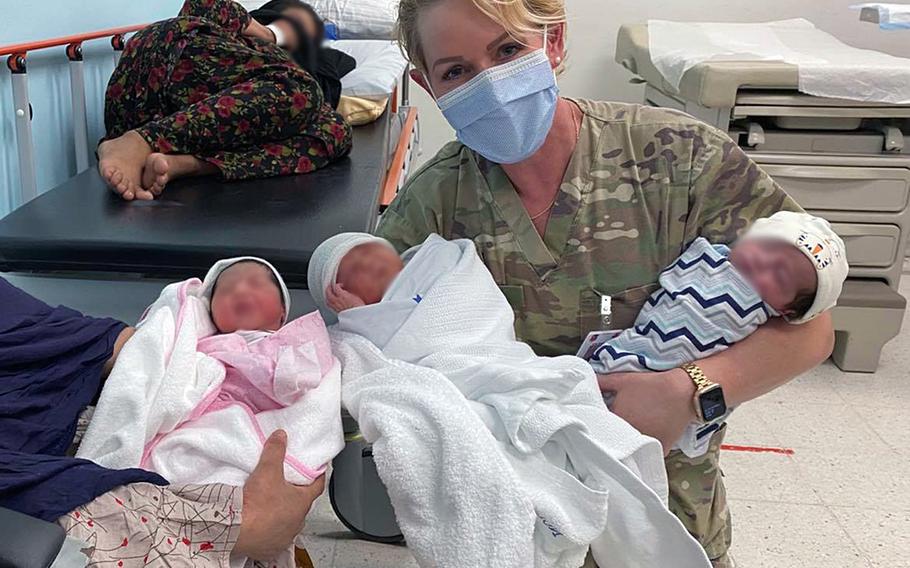 Nine babies have been born at the expeditionary medical clinic at Al Udeid Air Base in Qatar since the base became a main stopover for evacuees leaving Afghanistan last month, even though the clinic was not set up for infants.

Wild, a family medicine doctor back home, helped deliver the nine healthy babies, she said. The mothers are also doing well, she said.

“My faith in humanity is challenged every day by seeing the people we have to treat and the injuries they’re sustaining,” Wild said. “But it’s restored every time I see what our medics and our people on the front lines are doing to save the lives of the evacuees.” 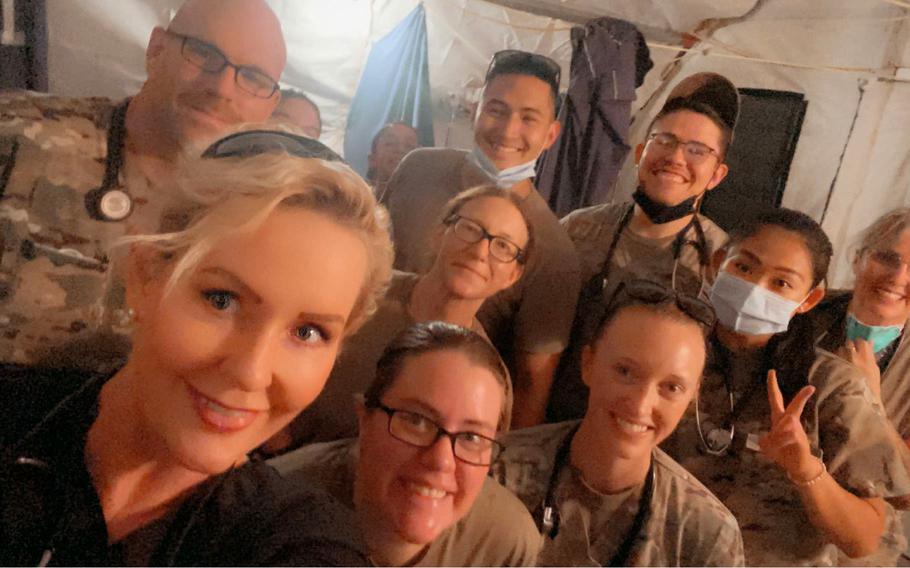 Members of the 379th Expeditionary Medical Group take a picture while supporting Afghanistan evacuation operations at Al Udeid Air Base, Qatar. Since the base became the main stopover location for evacuees from Afghanistan on Aug. 14, 2021, members assigned to the unit helped deliver nine babies. (U.S. Air Force) 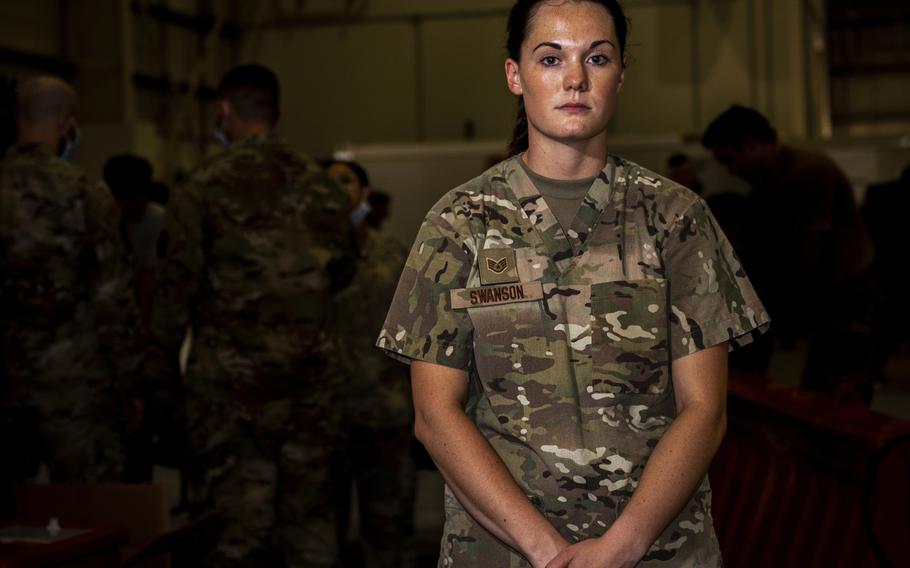 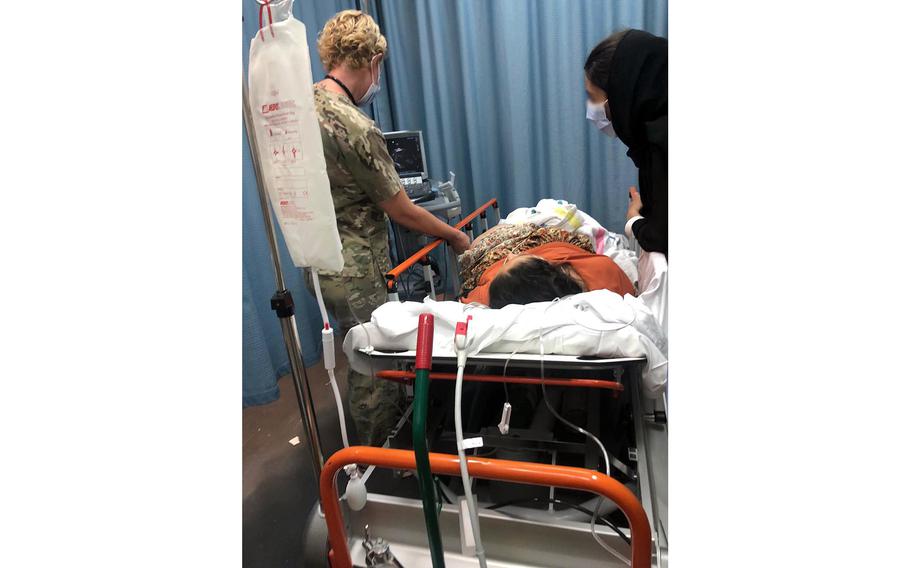 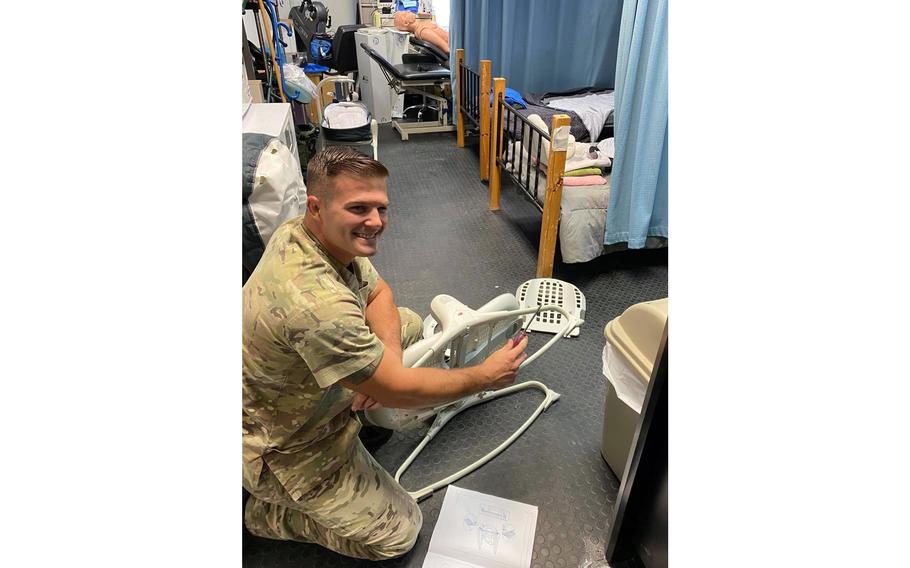 A member of the 379th Expeditionary Medical Group, who worked as a physical therapist before supporting Afghanistan evacuation operations, sets up bassinets to support the newborn children of evacuees at Al Udeid Air Base, Qatar. Since the base became the main stopover location for evacuees from Afghanistan on Aug. 14, 2021, members assigned to the unit helped deliver nine babies. (U.S. Air Force)

The clinic team, which is made up largely of reservists, has had to improvise supplies and draw on the knowledge they bring from civilian jobs that Wild said were “extremely useful.”

Some work as optometrists or physical therapists in the service but are emergency medical technicians or labor and delivery nurses outside the military, the statement said.

Wild said members of the 379th EMDG sacrificed sleep, skipped meals to give to patients and gave cold children the clothes off their backs.

Over 55,000 evacuees had been brought to the base as of Wednesday, with a single-day record of more than 17,500 housed on base, said a U.S. government official who spoke on condition of anonymity to discuss the matter with Stars and Stripes. Most had already departed, the official said.

A large number of evacuees have needed medical treatment, officials said in Thursday’s statement. Among them were a woman who was in labor when her plane landed, a patient suffering complications from diabetes and people with open wounds.

Some children under 10 arrived last week with wounds from apparent rubber bullets, said a base resident, though it wasn’t clear who shot them. The resident, who was not authorized to speak to the media, declined to be named.

One medical concern for base residents was the potential for a coronavirus outbreak amid the evacuation, leading officials to institute screening tests for those assisting and installation-wide mandatory mask wear, regardless of vaccination status, the government official said.

For Staff Sgt. Abigail Swanson, a medical technician assigned to the 379th Expeditionary Medical Operations Squadron, the operation was a chance to do the job she wanted when she signed up.

“This is what the Air Force trained me to do,” Swanson, a member of the North Dakota Air National Guard, said in a service statement. “I am happy that I can help and use my skills in a situation like this.”