The U.S. military is likely to reduce the number of troops it keeps in the Middle East and Central Asia while remaining engaged in those regions to counter Iran and extremist threats, multiple analysts and a former head of Central Command said.

Fewer resources there would allow the Pentagon to concentrate on deterring China from engaging in a fight for Taiwan and other territories in Asia, and to keep focusing on Russia, which is in an armed standoff with NATO over Ukraine.

A 2021 federal review of troop deployments directed the Pentagon to assess its “enduring posture requirements in the Middle East.”

The administrations of former presidents Barack Obama and Donald Trump previously proposed shifting focus away from Iraq and Afghanistan.

The U.S. could move some troops elsewhere, consolidate the number of U.S. bases and decrease the time the Navy’s aircraft carriers spend in the region, Joseph Votel, a retired general who helmed U.S. Central Command from 2016 to 2019, said in a recent interview. 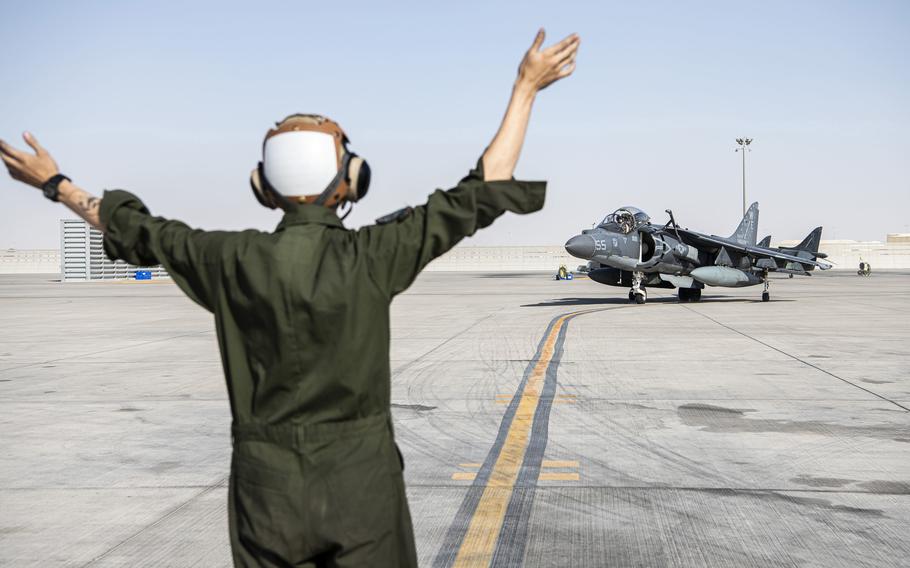 Lance Cpl. Jarod Volstorf, 11th Marine Expeditionary Unit, signals to an AV-8B Harrier pilot at Al Udeid Air Base, Qatar, Nov. 28, 2021. An estimated 40,000 to 60,000 troops are deployed to Central Command, according to a recent statement from the command to Stars and Stripes. (Stefan Alvarez/U.S. Air Force) 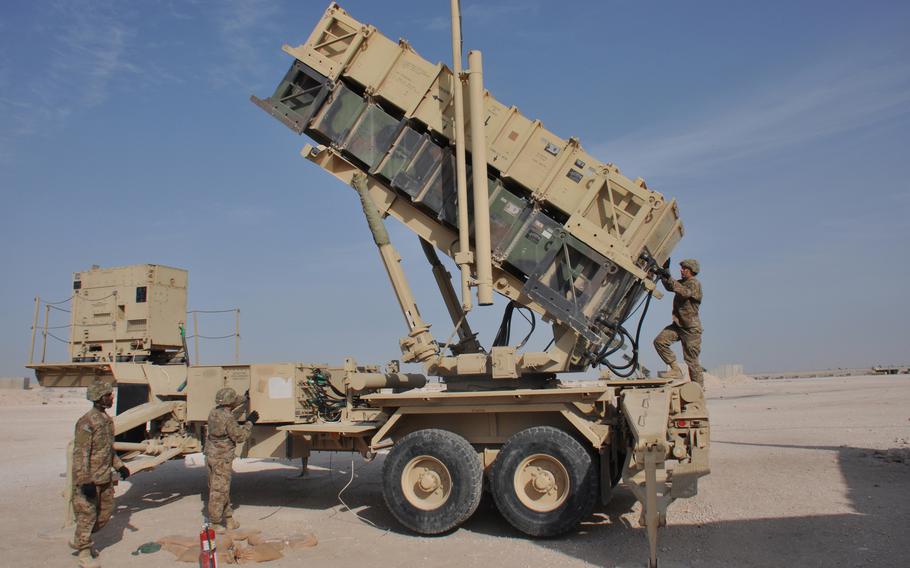 Sgt. Charles Glover, Pfc. Michael Schultz and Pfc. James Weaver, from left, of the 62nd Air Defense Artillery Regiment, prepare a Patriot missile to fire during an exercise at Al Udeid Air Base, Qatar, in 2015. A former U.S. Central Command boss and analysts say it is likely that the U.S. will reduce the number of troops it keeps in the Middle East. (James Hodgman/U.S. Air Force)

The troops remaining would still be able to respond to threats, but the U.S. would have to be more “thoughtful” in using this smaller force, said Votel, now a senior fellow on national security at the Middle East Institute in Washington.

“Our interests and challenges remain generally the same, but what’s different is that we’re going to have a different force structure on the ground,” Votel said.

An estimated 40,000 to 60,000 troops are deployed to CENTCOM, a recent statement from the command to Stars and Stripes said.

These troops are deployed to 21 countries, from Egypt in the west to Kazakhstan in the northeast. They train with local military units, operate drones and maintain a vast network of bases necessary to move U.S. troops throughout the area.

In an email, CENTCOM declined to discuss the future posture of its forces.

The U.S. is most likely going to try to “right-size” the number of troops in the Middle East by making modest but still significant cuts, said Michael E. O’Hanlon, senior fellow at the Brookings Institution.

The U.S. has already withdrawn from Afghanistan and reduced its footprint in Iraq. And last summer it announced the closure of U.S. Army Camp As Sayliyah-Main in Qatar. 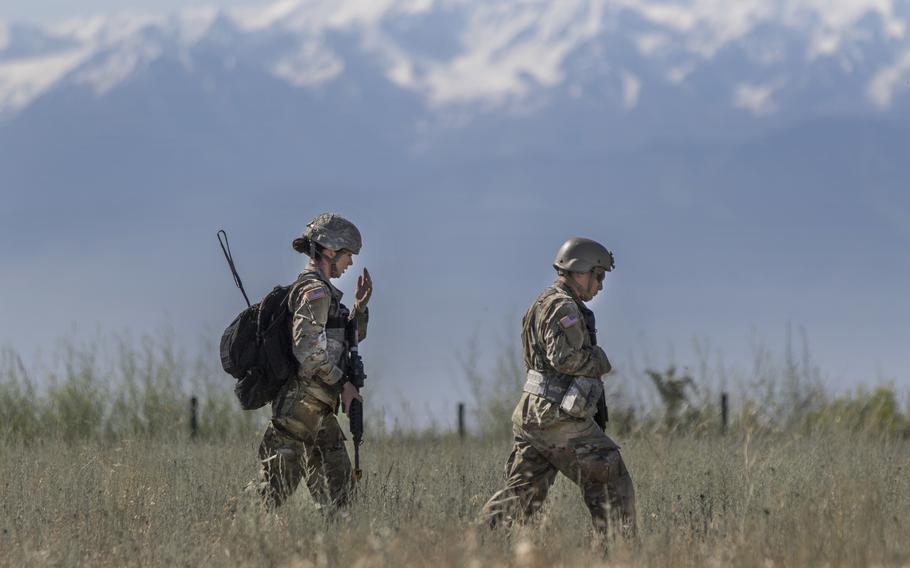 “This is overall just an evolutionary moment for CENTCOM,” said Jason Campbell, a policy researcher at Rand Corp.

The commander in charge of CENTCOM’s next steps may soon be Army Lt. Gen. Michael “Erik” Kurilla, commander of the 18th Airborne Corps, headquartered at Fort Bragg, N.C.

If his nomination is confirmed as expected by the Senate, Kurilla will have to gauge what is needed to deal with continuing threats in Iran and Afghanistan.

Iran views the U.S. campaign against the Islamic State group in Iraq and Syria as contrary to its ambitions for dominance in the Middle East, analysts said.

Attacks on American troops continue even after the U.S. announced the end of its combat operations in Iraq in December. Two drone attacks occurred this month on the anniversary of the U.S. airstrike that killed Iran’s former spy chief, Maj. Gen. Qassem Soleimani.

Future conflicts in the region are expected to be in the “gray zone,” in which ill-defined campaigns of subterfuge and aggression fall below the threshold of outright war, Votel said.

Tehran boasts advanced missile and drone technology, which it has exported throughout the region via proxies, and has been accused by the West of pursuing nuclear weapons.

“Iran has an objective to be the regional hegemon,” said Votel, who had Kurilla as his chief of staff. “This will be one of the big challenges for the (incoming) CENTCOM commander: orchestrating and constructing the partnerships and coalitions to help us deal with that.”

Another challenge remains in Taliban-ruled Afghanistan, where terrorist groups like al-Qaida and the local Islamic State branch operate. A U.S. Green Beret fires an M110 sniper rifle during Exercise Bright Star 2021 in September, at Mohamed Naguib Military Base, Egypt. U.S. Central Command has troops stationed or deployed from Egypt in the west to Kazakhstan in the east. (Dean Gannon/U.S. Army) 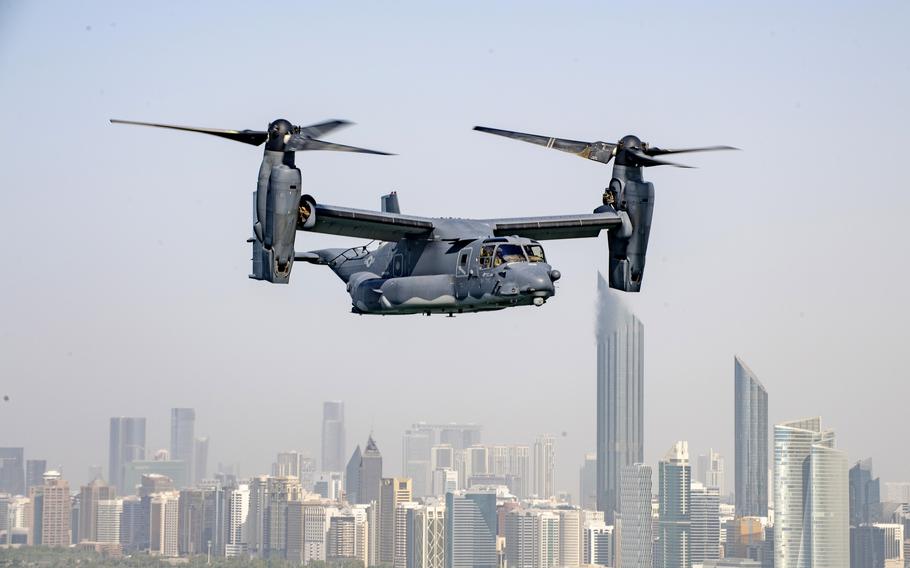 “Afghanistan and the immediate region is absolutely going to remain a focal point, because there’s a broad consensus that there are a number of threats that continue to stem from there,” Campbell said.

The U.S. may need to conduct anti-terror operations in Afghanistan via aircraft carriers or bases in countries surrounding the Persian Gulf, such as Qatar, the United Arab Emirates and Bahrain.

But if these partner nations believe the U.S. is abandoning the region or is unable to promote their interests, they may start hedging their bets by reaching out to China and Russia, analysts said.

The Chinese are constructing a secret military base in the UAE, The Wall Street Journal reported in November, while the Russians have long been in the region, particularly through their ties to Syria.

“America’s Gulf partners, they’ve heard now for almost three U.S. administrations that the U.S. is getting out of the Middle East and pivoting to Asia,” said Katherine Zimmerman, a fellow at the American Enterprise Institute, a Washington-based think tank.

“They are reading the winds of geo-strategic change and have started courting or responding to Chinese courtship and to Russia making inroads,” Zimmerman said.

America is unprepared to counter Chinese and Russian diplomatic and economic efforts to win favor in the Middle East, some analysts said.

The U.S. doesn’t have ambassadors appointed to many countries in the region, Campbell noted.

“Meanwhile, China has sent some of their best diplomats to win people over,” he said.

If the U.S. shifts too many resources out of the Middle East to focus on China in the Pacific and Russia in Europe, then the result may be those two countries increasing their presence in the Gulf, O’Hanlon said.

Winding down the U.S. presence in the Middle East has been a difficult process in the past and will continue to be so in the future, O’Hanlon said.

“When we’ve tried to say, ‘We’re minimizing our role,’ it tends to come back and bite us,” he said.