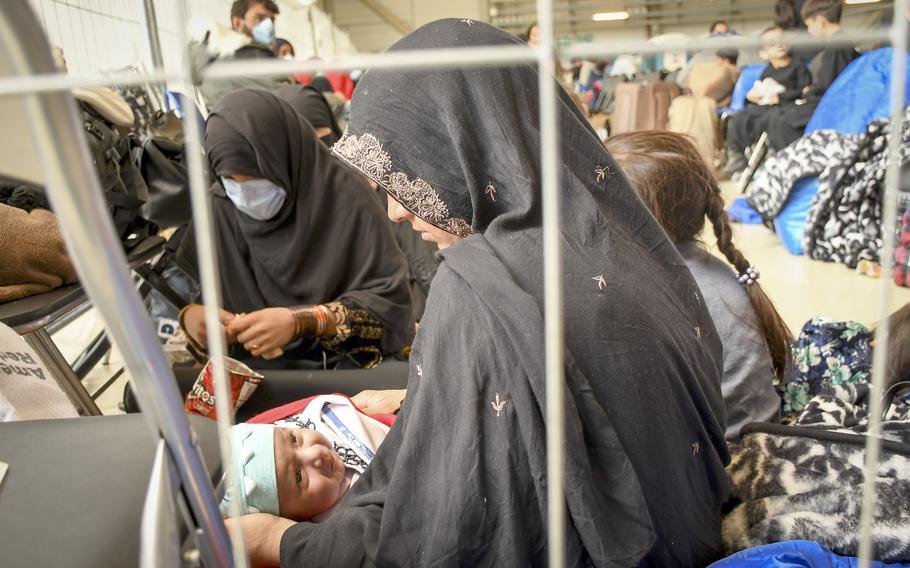 Buy Photo
An evacuee from Afghanistan, Worahmina, holds her 15-day-old son Mustafa while waiting for a flight to the U.S. in a hangar at Ramstein Air Base in Germany on Wednesday, Sept. 1, 2021. (J.P. Lawrence/Stars and Stripes)

The Treasury Department on Wednesday issued new licenses to loosen sanctions restrictions on assistance to Afghanistan, following a wave of appeals from aid organizations, lawmakers and others to prevent economic collapse and mass starvation.

The licenses expand the definition of allowed humanitarian assistance to education, including salary payments to teachers, and permit a broader use of U.S. funds received by aid organizations working inside the country.

The United Nations and international financial institutions have warned that prohibitions of economic dealings with the Taliban, and the freezing of Afghanistan’s $10 billion in foreign reserves - most of it held in the United States - have brought the country to the brink of disaster.

The Biden administration, joined by much of the world, has said that the militant government that took over the country in August cannot be recognized unless it ensures the human and civil rights of all Afghanistans, including minorities and women, and breaks ties with terrorist organizations such as al-Qaida.

But the abrupt cessation of foreign-aid funding that provided 40% of all government revenue and more than 75% of all public spending has brought most banking and commerce to a halt and left many without jobs or working without paychecks amid a prolonged drought, the ravages of the coronavirus pandemic and the onset of Afghanistan’s harsh winter.

Last week, dozens of U.S. lawmakers and former top U.S. military and diplomatic officials who served in Afghanistan joined the United Nations and humanitarian organizations in appealing for changes in administration policy.

In Islamabad Monday, Martin Griffiths, the U.N. undersecretary for humanitarian affairs, told a special session of the Organization of Islamic Cooperation foreign ministers that Afghanistan’s economy was in “free-fall” and warned that “if we don’t act decisively and with compassion” it would “pull the entire population with it.”

While the humanitarian response in terms of food, shelter and medical supplies sent to Afghanistan were crucial, Griffith said, it was not enough. He called for flexible donor funding that could be used to pay salaries for public sector workers and support basic services including health, education, electricity and livelihoods.

Addressing the meeting, convened especially to discuss the Afghanistan situation, Pakistani Prime Minister Imran Khan called the crisis “man-made,” and said it is “being created despite knowing that it can be averted if [Afghanistan’s U.S.-based] accounts are unfrozen and liquidity is put into their banking system.”

The OIC set up a special fund for Afghanistan, and urged member states to contribute.

Secretary of State Antony Blinken told reporters Tuesday that the administration is “looking intensely at ways to put more liquidity into the Afghan economy, to get more money into people’s pockets, and doing that with international institutions, with other countries and partners, trying to put in place the right mechanisms to do that in a way that doesn’t directly benefit the Taliban but does go directly to the people.”

The Treasury actions announced Wednesday expand on earlier measures authorizing noncommercial cash remittances to individuals in Afghanistan, and assurances issued to the international commercial banking community that many transactions with Afghanistan could continue without violating U.S. sanctions.

The United Nations Security Council on Wednesday also unanimously approved a U.S.-sponsored resolution, effective for one year, that largely duplicated the Treasury actions. The Taliban is sanctioned as an organization, as are about 130 members of its leadership.

Newly authorized transactions, it said, “explicitly do not authorize financial transfers to the Taliban or the Haqqani Network,” an affiliated organization.

The United Nations has appealed for funding to expand a program it set up in October to pay the salaries of tens of thousands of health care workers, with money going directly to them and not through the Taliban government.

“It’s taken time to figure out the mechanisms,” said a senior Biden administration official, speaking on the condition of anonymity under rules set by the administration. “As the situation evolves, we’re going to find new ways to assist.”

Officials have said the administration is not currently considering unfreezing Afghanistan’s frozen reserve funds, noting that they are the subject of litigation by victims of the Sept. 11, 2001 terrorist attacks and have been attached by federal courts.