Air Force looks to retire 150 aircraft, including some Warthogs, but adds F-15s in its nearly $170 billion proposed budget for 2023 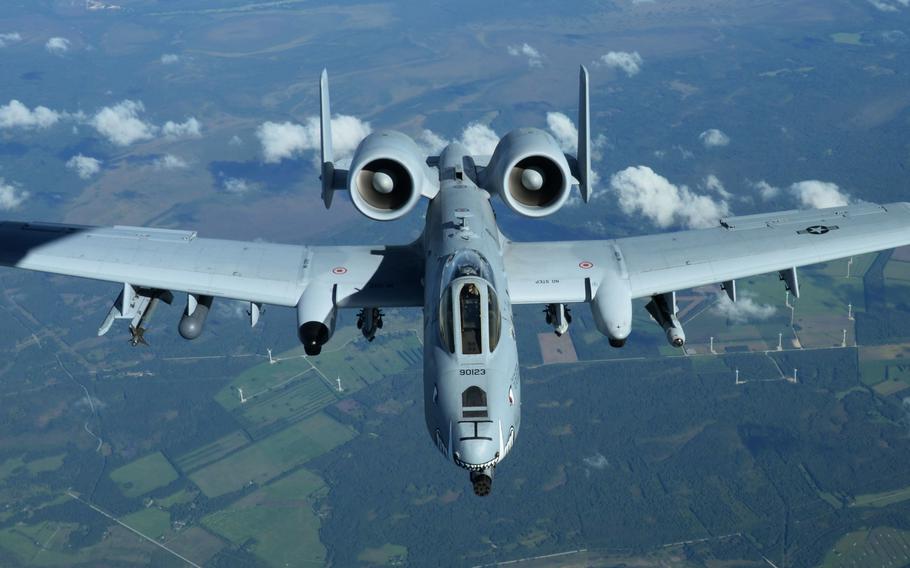 An A-10 Thunderbolt II, known as the “Warthog,” from Whiteman Air Force Base, Missouri, flies next to a KC-135 Stratotanker assigned to RAF Mildenhall, England, Sept. 9, 2015, over Estonia. The Air Force is looking to get rid of 150 aircraft, including 21 Warthogs, according to its proposed $169.5 billion budget for fiscal year 2023 released Monday, March 28, 2022. (Justine Rho/U.S. Air Force )

The Air Force is looking to get rid of 150 aircraft, including 21 Warthogs, and add 24 F-15 fighter jets with an eye toward the Pacific region, according to its proposed $169.5 billion budget for fiscal year 2023 released Monday.

The requested spending plan for the fiscal year that starts Oct. 1 increases the service’s budget by $13.2 billion over its previous year’s request, the service said.

The funding increase, which is about 8% after inflation is removed, also boosts spending future technologies and pay raises for service members and civilians.

The Air Force request rolled out Monday as part of the Pentagon’s proposed $773 billion fiscal year 2023 budget, which asks Congress that remains focused on curbing the Chinese military while keeping Russia’s aggression in Europe in check and giving troops a 4.6% increase in pay.

The funding decisions for the Air Force were based on seven “operational imperatives” identified by service Secretary Frank Kendall and address the Department of the Air Force as a whole, which includes Space Force.

“These imperatives reflect the critical capabilities and functions we must invest in to ensure the United States’ ability to deter conflict, project power and prevail in a high-end fight,” Undersecretary of the Air Force Gina Ortiz Jones said during Monday’s budget presentation.

“This really gets after the fact that we are retiring all the F-15 C's and D’s by 2026. We were replacing that capability faster, specifically within the South China Sea,” said Maj. Gen. James D. Peccia III, deputy assistant secretary for budget.

The Air Force also projects divesting 21 A-10 Thunderbolt II attack jets, known as Warthogs, in this proposed budget, which will be backfilled by F-16 Fighting Falcon fighter jets, Jones said.

“We look forward to working with Congress to make sure that, again, we've got the right mix of aircraft that are survivable, effective and can provide our airmen or guardians the best chance of winning them in the [Indo-Pacific Command.] The A-10 is just limited in its ability to contribute to that fight,” she said.

The request also calls for a reduction of 300 airmen from the Reserve force to 70,000, and an increase of 100 members to the National Guard, increasing it 108,400 personnel.

This amount of troops would cost about $39.3 billion, or 23% of the service’s budget.

The Air Force requested an increase of $4.6 billion in research, development, test and evaluation, bringing the total to $33.4 billion. This increase allowed for more spending on ground-based strategic deterrence, long-range standoff weapons and hypersonic weapons development.

Additionally, the service funded about 1.1 million flying hours and added $16 million for diversity and inclusion scholarships for cadet aviation training. It also dedicated more funds to climate initiatives and improvements to the sexual assault and harassment program.