The U.S. Army veteran helped refugees escape from war-torn Afghanistan during the often-chaotic days in August 2021 at Kabul International Airport. But though the headlines from those desperate scenes have faded long ago, Plitsas is still working nearly 18 months later from his Fairfield home — and saving evacuees as recently as last week.

Many of his efforts have remained secret because the Afghans are seeking to avoid the brutal Taliban, enemies of the United States who have been known to kill Afghans who have helped Americans. But now he can discuss some aspects as many Afghans have escaped from their homeland.

“We had rented or leased about 70 apartment buildings, and we were hiding and feeding almost 10,000 people across the country,’’ Plitsas said in an interview. “After the airport collapsed, the State Department didn’t have anybody who could run flights and the Qatari government hadn’t yet stepped up, so my organization basically stepped in. Through a group of people who met remotely in August, we put together contracted charter flights from the fall of 2021 until we actually filled up the intake reception place in Qatar.’’

Plitsas works as one of the leaders of a sprawling organization that operates under the Human First Coalition, a nonprofit that includes drivers on the ground in Afghanistan to transport evacuees and coordinators back in the United States to oversee the gigantic effort.

The founding partners contributed $6 million of their own money, chiefly from their 401 (k) accounts, and they raised about $12 million overall for the effort.

A veteran of the U.S. Army in Iraq, Plitsas also served in 2012 as a defense civilian intelligence officer in Afghanistan. He learned how to operate in war zones and later learned about rescues as chief of sensitive activities in the Office of the Secretary of Defense at the Pentagon.

With fellow veterans, Plitsas, 38, has banded together with a loose confederation of national security professionals with detailed knowledge of Afghanistan who are helping families escape from the Taliban. Originally dubbed “Digital Dunkirk,’’ the group operates independently from the U.S. government, but the volunteers still interact with the government due to their personal connections and deep knowledge of military intelligence.

In a political twist, Plitsas has worked closely in tandem with U.S. Sen. Richard Blumenthal, who has helped clear bureaucratic hurdles through his high-level contacts with President Biden’s administration in the White House and the State Department. While Plitsas helps make it work through contacts on the ground in Afghanistan, Blumenthal handles the governmental pieces in Washington, D.C., as a member of the Senate Armed Services Committee.

“Alex is a real hero,’’ Blumenthal said in a telephone interview. “When we started working on this issue, he was still the Republican town chairman in Fairfield. We sort of agreed that we weren’t going to talk politics and were going to focus on the mission. It just shows you the bipartisan nature of this cooperation. I’ve met his family. We’ve become real friends.’’ 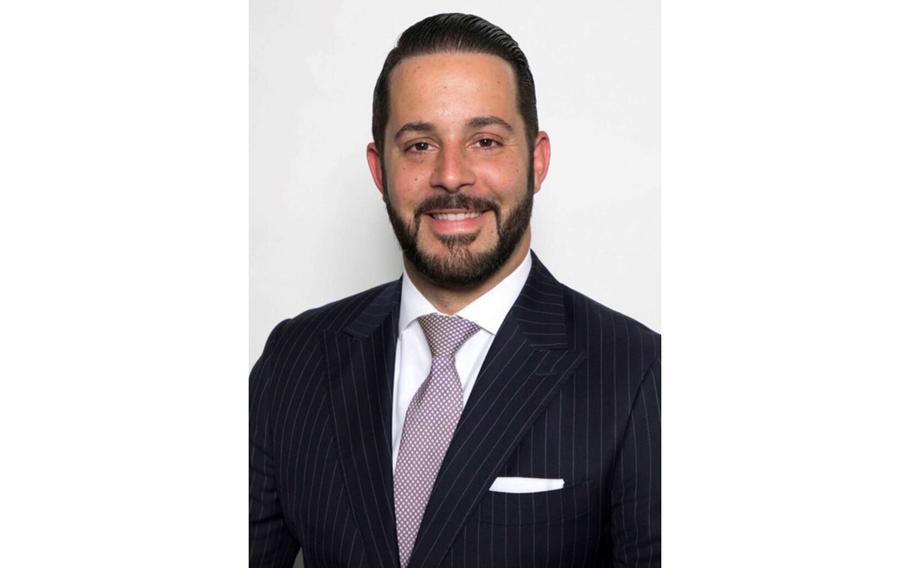 Intense and focused, Plitsas often speaks quickly when discussing the sensitive logistics of exactly how Afghans have been rescued. Some of the escapes have been life-and-death situations like those seen on television during the mad scramble at the airport before the American military left the country on a self-imposed deadline.

Over the past 18 months, there have been some close calls.

“In December of 2021, two of my partners ended up getting captured in Kabul, and they were detained by the Taliban for 105 days,’’ Plitsas said. “I was helping to coordinate with the U.S. government to get them released because I had hostage rescue as part of my portfolio back when I was still at the Pentagon. We got them out of prison.’’

Some of the logistics involve multiple people around the world. In one case, he needed help from an important contact overseas who had been tied up on another project.

“He was in Mogadishu in Somalia on a different mission,’’ Plitsas said. “He had to three-way call a colleague who was running the gate at the time in Kabul. At one point, it’s me in Fairfield, one guy in Mogadishu, and the other guy is on the ground in Kabul — all on the phone call on WhatsApp. We got all these people out, including four under-aged kids with no paperwork.’’

If it sounds like a movie script, it is. The heroics might eventually be turned into a film by the same team that produced Argo, the 2012 Academy Award-winning thriller with famed actor Ben Affleck as a CIA agent involved in the risky rescue of six American hostages related to the U.S. Embassy in Iran in 1979.

In October 2021, Plitsas’s group was involved in a high-stakes evacuation in Afghanistan that made headlines nationally.

“We rescued Biden’s interpreter and got him across the border to Pakistan. That was us, as well,’’ Plitsas said.

The story began in February 2008 when Biden, who was then a U.S. senator, had been flying in a U.S. Army helicopter on a foreign policy fact-finding mission with two other senators, but a severe snowstorm forced them to make an emergency landing in a valley in the treacherous Afghanistan mountains. An Afghan interpreter named Aman Khalili helped rescue Biden and his colleagues, including then-Senators John Kerry of Massachusetts and Chuck Hagel of Nebraska.

Fast forward 13 years, and Khalili and his family were stuck in Afghanistan because his Special Immigrant Visa, known as SIV, had been rejected. Unable to escape, he was desperately trying to hide from the Taliban because he had helped the Americans. Like thousands of others, he had arrived at the Kabul airport in August 2021 but was unable to board a flight during the final chaotic days of the evacuation as Afghans scrambled for safety.

The issue went public, and White House spokeswoman Jen Psaki said at the time in August 2021, “We will get you out. We will honor your service. And we’re committed to doing exactly that.’’

Plitsas noted that the interpreter immediately became a high-profile target once word spread that he had been the president’s interpreter.

“The Talibs were out hunting for him,’’ Plitsas said, referring to the Taliban. “We found him, along with a couple of other groups. They couldn’t do anything with him, so we got him, and then whisked him across the border safely to Pakistan and got him in safe houses. I was on the phone with the State Department’s chief of staff at like midnight, and they sent a military jet to go pick him up.’’

While many Afghans have escaped, hundreds of thousands more want to escape from the oppressive regime of the Taliban. One of the problems is the sheer logistics.

“There have been no flights since November because the Qataris couldn’t process World Cup [soccer] visitors at the same time as Afghans,’’ Plitsas said. “There are 50,000 Afghan allies cleared background-check-wise, ready to fly, who are stuck in Kabul because there is no transportation. There’s another 115,000 behind them who haven’t been cleared yet, and that doesn’t even account for the guys who worked as contractors on the bases for us. That’s another 100,000.’’

He added, “If you have a green card and if you have a U.S. passport, you can walk to the airport in Kabul and get on a commercial flight and leave. No one is going to stop you. There are commercial flights leaving for Doha and Dubai that leave pretty regularly, but you need to have a visa in order to leave. No one in the world is granting Afghans visas at this point. They’re all basically stuck. They’re land-locked.’’

Some of the rescues have involved Connecticut residents, including a 14-year-old boy whose father had Lou Gehrig’s Disease, a progressive degenerative disease that has no cure.

“When the airport collapsed, they were visiting family,’’ Plitsas said. “They ran out of drugs for the father and he died, leaving the kid by himself as a 14-year-old with no adult who could fly with him. So we had to pick him up in the middle of the countryside, get him into a safe house, get the paperwork legally drawn up and find a chaperone who could get him on a flight and fly him back to Connecticut.’’

In another case, the child was even younger.

“We had a 6-year-old who was knocked unconscious during a suicide bombing,’’ Plitsas said. “The kid came to. We had to go get him. Get legal paperwork, and fly him back to the U.S.’’

While working on various evacuations, Plitsas has been in contact with Blumenthal, who has extensive contacts in the Democratic administration and has spoken personally to Secretary of State Antony Blinken and other top officials. Like Plitsas, Blumenthal’s office has kept working on the issue over the past 18 months.

“It is a continuing real and urgent problem because these people literally aided our diplomats and troops as translators, interpreters, security guards, and sources of intelligence,’’ Blumenthal told The Courant. “Now, they have targets on their backs. So this struggle continues. ... Alex has been a real leader. We’ve worked very closely. I’ve met with some of his allies who have been working in Afghanistan. He’s very hands-on. He’s been a tremendous resource to us and to others who have sought to provide a path out of Afghanistan for these at-risk allies who remain there.’’

Blumenthal is among the leaders in Congress on the bipartisan Afghan Adjustment Act, which would provide a path to permanent legal status for the refugees who helped Americans and fled to the United States.

At a time when Republicans and Democrats clash bitterly on major issues in Washington and essentially never praise each other, Plitsas says the situation has been different in Connecticut.

“Blumenthal has been incredible,’’ Plitsas said. “I love that man. He’s been nothing short of remarkable.’’

Work continues to this day

National attention has been focused on Ukraine and Afghanistan has faded from the spotlight. But not for Plitsas.

Besides working on evacuations, Plitsas still works a fulltime job as a consultant in the aerospace and defense industry. He is also still a member of the Fairfield Fire Commission and spends time with his wife and two daughters.

In the most recent case, some evacuees landed in Houston only last week.

How long can he continue this pace?

“I don’t know,’’ Plitsas responded. “There’s a lot more work to do. ... It’s all from an iPhone with encrypted chat apps in Fairfield. I’ve literally run international charter flights, talking to pilots on the ground from Kabul international airport, from my living room in Fairfield.’’