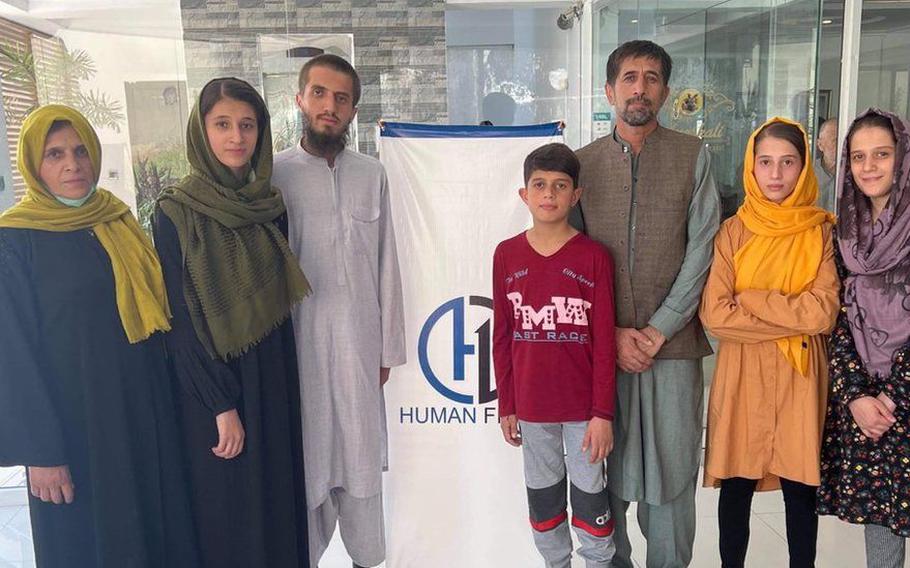 Aman Khalili, third from right, had been in hiding in the weeks after Kabul’s fall to the Taliban in mid-August and the U.S. withdrawal from the country. Khalili and his family were rescued last week in a joint effort by a group of Arizona military veterans, aid organizations and the Department of State. (SAFI RAUF/HUMAN FIRST COALITION)

The Afghan interpreter who in 2008 was part of a team that rescued then-Sen. Joe Biden when his helicopter got caught in a blinding snowstorm in Afghanistan safely left the country with his family last week.

The interpreter, Aman Khalili, had been in hiding in the weeks after Kabul’s fall to the Taliban in mid-August and the U.S. withdrawal from the country. Khalili, his wife and several of his children — a number he did not want to disclose for safety reasons — were rescued last week in a joint effort by a group of Arizona military veterans, aid organizations and, ultimately, the Department of State.

Some of the U.S. veterans involved in the operation to get the family out had worked with Khalili on the 2008 operation to rescue Biden, D-Del., and two other senators — John F. Kerry (D-Mass., and Chuck Hagel, R-Neb. — when their helicopter was forced to land in an Afghan valley vulnerable to a Taliban attack.

“Aman was on that mission, and the significance of what he did on that mission — he didn’t know it was anyone, it was just another mission to him,” said Brian Genthe, an Arizona combat veteran and Purple Heart recipient who led the effort to get Khalili and his family out of Afghanistan after the interpreter sent him Facebook messages asking for help. Genthe said that Khalili “was there the entire time” as U.S. troops fought the Taliban in 2008.

“He literally sacrificed time with his family because he wanted to make his country right, because he believed that we were there to help them out,” Genthe said in a phone interview with The Washington Post on Tuesday. “He would literally go six, seven months for whatever interpreter pay was and not see his family. And especially with what we did with him, we engaged the Taliban, we actually fought the Taliban.”

On Aug. 31, the Wall Street Journal reported that Khalili had been left behind during the U.S. evacuation of Afghanistan. Khalili, in an interview with the Journal, directly appealed to President Biden, asking him for help. Days later, White House press secretary Jen Psaki said that the administration would help him evacuate.

The Wall Street Journal first reported that Khalili had been evacuated.

Ultimately, the Department of State stepped in, but only after the Arizona veterans and the Human First Coalition - a nonprofit run by volunteers, including U.S. veterans, that was formed soon after the fall of Kabul with a focus on evacuating Americans and other vulnerable people from Afghanistan — coordinated an escape route for the family through Pakistan.

After a few days in Pakistan, the family arrived in Doha, Qatar, on Monday after Deputy Secretary of State Wendy Sherman asked for Pakistani approval to fly them to Qatar aboard a U.S. military plane. The State Department and the White House did not immediately respond to a request for comment about the family’s evacuation.

In WhatsApp messages to The Washington Post, Khalili said that his family is “tired of long travel,” but that, other than one of his children feeling joint pain, they are all “well and feeling safe” in Doha. His son, he said, will receive medical attention Wednesday.

Khalili said he is thankful for the individuals involved in their escape, telling The Post that they “saved my life.”

Khalili said his family is working on their Special Immigrant Visas, which will allow them to travel to the United States. He said they’re all excited to get here. Genthe said the State Department provided a specialist who will work with them on their applications. The first time Khalili applied for a special visa, he was rejected because of a misunderstanding with the contractor who originally hired him to work as a translator with the U.S. military.

Alex Plitsas, a spokesman for Human First Coalition and an Iraq War veteran, noted that, because of the known connection between Khalili and Biden, the Afghan interpreter was in danger.

“This gentleman did have an increased risk to his life because of his connection to the sitting president of the United States, which would make him a target of opportunity to a terrorist group,” Plitsas said. “But there are tens of thousands of people who remain in Afghanistan who do similar things, acts of valor protecting Americans over the course of the last 20 years, maybe not for somebody who is as famous as the president, but who are just as deserving to leave.”

Plitsas said Human First Coalition has received 30,000 requests from people in Afghanistan seeking support and have, since August, provided safe housing opportunities and secure transport to the airport to about a third. So far, Plitsas said, the organization has helped 6,000 people reach safety, including 1,000 Americans. He estimated that there are about 200 high-risk individuals that have made their way into Pakistan because it’s too dangerous for them to be in Afghanistan. Flying them out of Pakistan “is still a problem” that his group is working on.

“It is our expectation that they will be given the visas they were promised,” he said.