Buy Photo
Soldiers help Afghan families load their luggage on a bus out of Fort McCoy, Wis., Oct. 11, 2021. They were among the first to leave the base and begin the journeys to their new hometowns. (Zubair Babakarkhail/Stars and Stripes)

FORT MCCOY, Wis. — The 30 Afghan evacuees who boarded a bus Monday left behind the Army barracks that served as temporary homes and embarked on the last stage of their long journey, hopeful of finding work and resettling in communities across America.

They are among about 1,200 people who have now been resettled, officials at Fort McCoy told Stars and Stripes, out of approximately 50,000 evacuees at eight U.S. bases, with more arriving from overseas installations soon.

“I’m so happy that we are able to move to our final destination,” said Formuli, an evacuee who asked that his full name not be used out of fear for the safety of relatives still in Taliban-controlled Afghanistan. 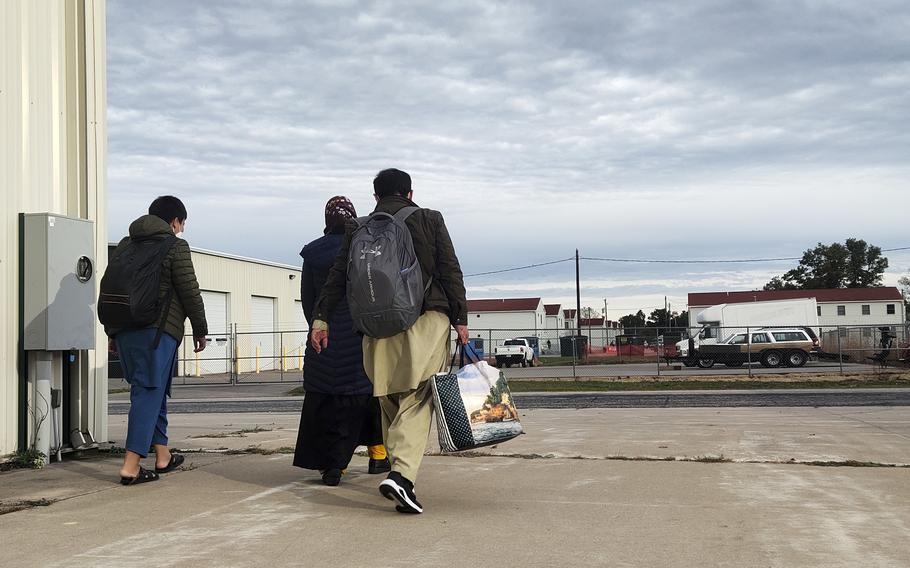 Buy Photo
An Afghan family prepares to leave Fort McCoy, Wis., Oct. 11, 2021. The 30 evacuees who left on a bus that day were among the first 1,200 to take the next step of resettlement in America. (Zubair Babakarkhail/Stars and Stripes)

Formuli used to work in information technology at the U.S. Embassy in Kabul. He and his family are headed to New York state after 41 days of processing, paperwork and vaccinations at Fort McCoy.

But even for highly skilled Afghans like Formuli, finding jobs may prove challenging.

Some 60% of recipients of Special Immigrant Visas who worked for U.S. forces in Afghanistan and Iraq were unemployed and reliant on cash assistance 90 days after arriving in America, according to a 2018 report by the U.S. Government Accountability Office. 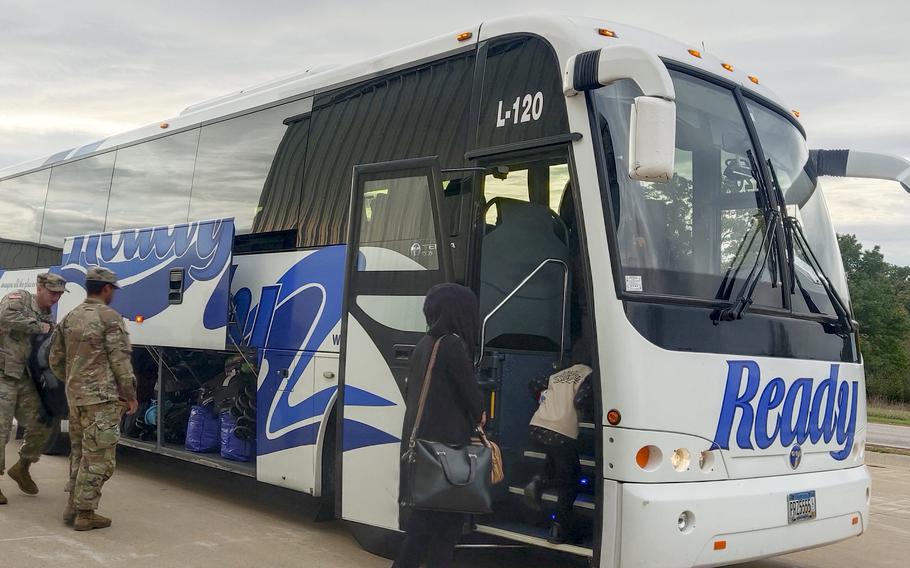 Buy Photo
Soldiers help Afghan families load their luggage on a bus out of Fort McCoy, Wis., Oct. 11, 2021. The Afghans were ready to be settled in their new hometowns, where they will receive help from aid agencies. (Zubair Babakarkhail/Stars and Stripes)

A more recent but smaller survey of SIV holders found half were unemployed or underemployed, a report in January by the advocacy group No One Left Behind found.

Many of the unemployed had high levels of education and proficiency in English, and they were frustrated that their experience did not lead to skilled work, according to both reports. Others with professional backgrounds took jobs as taxi drivers, warehouse workers and security guards to survive, the GAO report stated.

On Monday, some Afghans said they will be connected to resettlement agencies on arriving at their new homes.

The State Department partners with nine U.S. private agencies and one state agency to provide reception and placement services for refugees arriving in the United States.

The Lutheran Immigration and Refugee Service, for example, greets refugees at the airport, provides initial housing, and tries to help them find a job, the group’s website says. Buy Photo
An Afghan woman and her child prepare to leave Fort McCoy, Wis., Oct. 11, 2021, after finishing processing procedures at the base. (Zubair Babakarkhail/Stars and Stripes)

The Afghans leaving Fort McCoy on Monday said they hope the U.S. will continue supporting them, but said they wanted to become self-sufficient using the skills they learned in Afghanistan.

Sulaiman Sayaz, his wife, their two sons and a daughter boarded Monday’s bus with plane tickets in hand to take them to Maryland. Sayaz had worked as an electrical engineer providing power to U.S. military bases in Kabul.

The busload Monday was the first to leave the base that evacuees could recall. They and counterparts at other bases had entered the country through a process known as humanitarian parole, instead of the SIV program.

But many had worked with the U.S. government in Afghanistan and had been applying for the SIV.

Afghans who were granted humanitarian parole can receive refugee resettlement services and benefits as if they were SIV recipients. That is a result of a short-term funding bill passed in early October.

The bill also provides $6.3 billion in funding for Afghan refugee resettlement. Benefits include resettlement assistance from the departments of State and Health and Human Services as well as other assistance, such as access to the Supplemental Nutrition Assistance Program, commonly known as food stamps.

As many of the refugees look for jobs, additional challenges remain for their female family members, who are less likely to speak English and may be unable to leave the home because of child care needs.

Other challenges include barriers to finding housing, as refugees lack rental or credit histories and Social Security numbers, which limits their housing options.

Nawid Shinwari, 28, was once a mayor of a town in Nangarhar province. He acknowledges that he’ll need to learn a whole new set of skills to make it in America.

“I will take any job or work that I can,” said Shinwari, who expects to leave the base on Tuesday. “I need to get used to here and learn the language fully.”