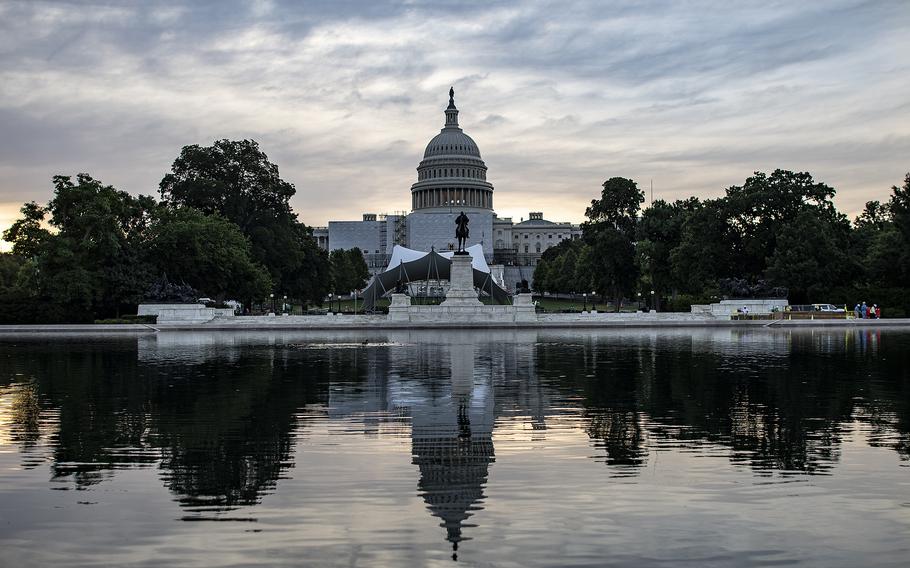 WASHINGTON — Close to 100 candidates with military service won or are winning their midterm elections and the results of these races could yield the largest influx of veterans voted into office on Capitol Hill in decades, according to some veterans advocates.

Congressional races in the House and Senate had 196 military veterans on ballots in the Nov. 8 election. As of Tuesday, 86 of those veterans have been projected to win their race, or they are leading in the few remaining races still undecided.

That is a substantial increase, according to veterans advocates.

“This is the first election since the Vietnam War where congressional military service has significantly increased,” said Seth Lynn, Veterans Campaign founder and a University of San Francisco adjunct professor.

“While this seems like a moderate uptick, it represents a profound and very positive shift in America's relationship with its veterans,” he added, noting the oldest members of the post-9/11 generation — who, polls have shown, have more positive views of the military — are voting now.

Veterans Campaign is a nonprofit, nonpartisan group that advocates for veterans in public service and supports veterans running for office.

Going into the elections last week, more than 200 veterans were on congressional and gubernatorial ballots nationwide, which was more than any election since 2012.

“The military taught me two very important things that I used to win my election — strategy and leadership skills,” said Luna, an Air Force veteran. “I won because of my ability to strategize and organize a massive grassroots infrastructure as well as strategically out-thinking my opponent.”

“While I can’t fly combat missions anymore or help drag soldiers from a burning Black Hawk [helicopter], I can use my role serving in the U.S. Senate to help ensure our military is strong and our veterans are taken care of when they return home,” she said. “True patriotism isn’t just measured by how we honor the sacrifices made by those in uniform on Veterans Day. It’s also how we honor them every other day of the year too. And that’s my mission in the Senate.”

One of the veterans who won a gubernatorial race was Maryland Democrat Wes Moore.

“You believed in the son of an immigrant. A graduate of a two-year college. A U.S. Army combat veteran,” Moore told supporters after his victory. “It’s because you believed that I stand here humbled and ready to become the 63rd governor of Maryland. Those of us who have put on the uniform of this country know what it means to serve and to sacrifice.”

It’s still possible that the number of veterans in the next Congress could be as high as 101. As of Tuesday, there were five uncalled House races involving veteran candidates. The veterans were leading in two of those races, and the other three trailed by a few thousand votes. All Senate and gubernatorial races with veteran candidates have been decided.

Despite the increase of veterans in the next Congress, military experience on Capitol Hill is still historically low. Veterans accounted for about two-thirds of all lawmakers in the House and Senate in the 1960s and 1970s. In the early 1970s, more than 80% of the Senate had military experience.

When the new Congress is seated Jan. 3, the Senate will include 17 veterans. That means 17% of the upper chamber will have military experience. The House, meanwhile, will have 86 vets, which will account for about 20% of the chamber.

“Fifty years ago, a significant majority of Congress had served in the military,” Lynn said, noting American support for the military at about that time began to wane because the Vietnam War was unpopular.

“At that time, however, America's relationship with its service members was deteriorating: the public perception of the military reached historic lows, families of means avoided military service, and veterans themselves became disillusioned,” he said.

Another factor that affected military experience in Congress, he said, is the all-volunteer military began in the 1970s, which resulted in fewer Americans serving.

Kyle Bibby, a Marine Corps veteran and deputy political director at Common Defense, a left-leaning veterans advocacy group, said Congress should have more representation from veterans. But he expects the number of veterans in Congress will never return to the heights of the ‘60s and ‘70s.

Opinions toward the military began to improve in the 1990s and especially following the Sept. 11, 2001, terrorist attacks, Lynn said. Americans who grew up after the attacks are now old enough to join the military and run for federal office.

“Unsurprisingly, the post-9/11 generation has shown a particular dedication to post-military public service, and they now make up a considerable number of the younger members of Congress,” Lynn said.

Bibby said veterans often bring virtues to Capitol Hill that non-vets don’t have, such as deeply held feelings of responsibility, duty and civic and military pride.

For the 2022 election cycle, Veterans Campaign found Republican veterans found more success on Election Day than Democratic veterans and will outnumber them three to one in the next Congress.

The group also noted veterans “played an outsized role” in the races that GOP candidates were most likely to win. They accounted for almost two-thirds of Republican challengers in races that were expected to be won by or lean to the Republican candidate. Also, 16 female veterans — including Luna — won Democratic or Republican nominations, the second-highest number in history after 2020.

“I think if you are considering running, you should do it,” said Luna, who lost by about 25,000 votes when she ran for the same seat in 2020. “We need more veteran representation in Congress. Especially with the long-term impacts of war we are all seeing, especially with the [global war on terror] generation.

“Running for office is not easy, but … we need you.”