In midterms, inflation and border overshadow fears for democracy and abortion rights WASHINGTON  (Tribune News Service) — Unless nearly every pollster in America is wrong, Republicans will retake the House in Tuesday's midterms, and maybe the Senate.

That would bring divided government back to Washington and with it, the likelihood of stalemate on the most contentious issues.

Still, the prizes in an election like this go beyond legislative priorities. Candidates in both parties have been telling voters that the tone and direction of the country are on the line.

"Our livelihoods, families, safety, and our freedom are all at stake," Florida Gov. Ron DeSantis told donors recently. Georgia Rep. Marjorie Taylor Greene called the election "a battle between the righteous and demonic."

"This is not a referendum. It's a choice — a fundamental choice — a choice between two very different visions for the country," he said after casting his ballot in Delaware.

Republicans frame the elections as a chance to repudiate vaccine and mask mandates and hostility toward domestic oil and gas production — a chance to stymie the Biden agenda and set a new path on cultural hot buttons.

"We have an attack on our religious and civil liberties. …We have soaring crime in our inner cities. Our children are being taught in schools that America is inherently racist, and that it really doesn't matter what bathroom you use, or what gender you were born, that you can change all that," said Brooke Rollins, president and CEO of the America First Policy Institute, where she and other Trump administration veterans nurture his agenda.

Some of the effects will be quick and visible. Others less so.

"I would not want to be Hunter Biden. I would not want to be the people in charge of the Afghanistan withdrawal," said Kellyanne Conway, the pollster and confidant of Donald Trump, referring to suspicions about the overseas dealings of the president's son, and the chaotic end to the nation's longest war.

GOP lawmakers are itching to grill Dr. Anthony Fauci — described by Texas Sen. Ted Cruz as the most "abusive bureaucrat" in U.S. history ― over COVID-19's origins and the federal response.

On Friday, Rep. Jim Jordan of Ohio, poised to take over the Judiciary Committee, signaled the thrust of hearings to come in a 1,000-page report on alleged "politicization" of the Justice Department and a "rampant culture of unaccountability, manipulation, and abuse at the highest level." 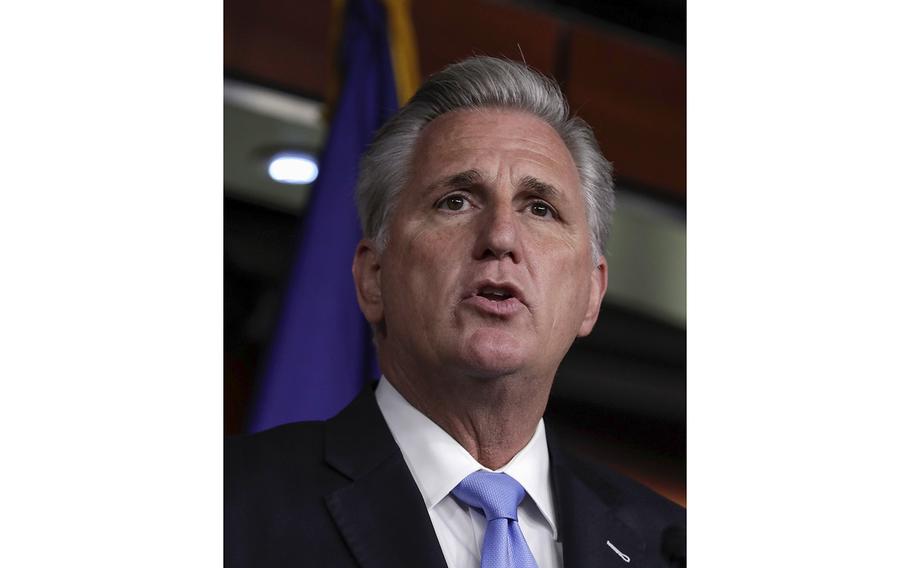 If the polls are correct, Rep. Kevin McCarthy, R-Calif., could be the next speaker of the House in January. (Yuri Gripas/Abaca Press/TNS)

Then there's the U.S.-Mexico border.

"We need to impeach Alejandro Mayorkas, the secretary of homeland security. And we need to fight to defund the 87,000 new IRS agents and put all that funding on securing the border," Cruz said recently on Fox News.

"There's always going to be more investigation when the other party takes over," said Tevi Troy, senior fellow at the Bipartisan Policy Center, a former GOP congressional aide and veteran of the George W. Bush administration.

But he said, "nobody is voting for Republicans to take over solely to do investigations. … If they just do oversight, it will be a failure."

Trump lost the House in his midterms. Ronald Reagan lost the Senate halfway through his second term. Bill Clinton lost both houses two years into his presidency. Barack Obama's "shellacking" in 2010 was epic. George W. Bush got a "thumpin,' " as he put it after his second midterms.

"It's a regular thing in American politics," said Troy.

Like his predecessors, Biden would have to scale back his ambitions.

He recently floated a windfall tax targeting oil companies' record profits. He's long wanted to resurrect a ban on assault-style weapons. Such goals would go nowhere at the Capitol. Filling judicial and executive vacancies will get a whole lot trickier if the GOP runs the Senate.

But the president's veto pen will likewise hold back the Republicans.

They won't be able to scrap Obamacare or finish Trump's border wall.

Sen. Lindsey Graham's call for a nationwide ban on abortion after 15 weeks would be a nonstarter — as would Biden's vow to enshrine the right to abortion, erased when the Supreme Court overturned Roe v. Wade in June.

Each side sees the midterms through dramatically different prisms.

Trump warns of rising crime, a slide toward socialism, open borders, and "indoctrination" in public schools with "twisted race and gender lunacy."

Biden warns that democracy itself is at risk unless voters repudiate Trumpism and a worldview that says it's OK for one party to trust elections only when it wins.

Nationwide, nearly 300 Republicans running for statewide and federal office have openly questioned Biden's victory in 2020, according to analyses from The Washington Post, CBS News, the Brookings Institution and others.

"The election was rigged and stolen, and now our country is being destroyed. I ran twice. I won twice. And did much better the second time than I did the first," Trump said Oct. 22 at a rally in Robstown, Texas, near Corpus Christi.

Biden sailed past Trump in 2020: 81 million votes to 74 million, and a landslide margin in the Electoral College.

He's tried to make this a central issue in the midterms.

"What's at stake is not just the policy of the moment," Biden said in a prime time speech Wednesday night near the Capitol, denouncing Trump for maintaining the "big lie" about nonexistent vote fraud.

"This is … the first national election since the events of January 6th, when the armed, angry mob stormed the U.S. Capitol. I wish I could say the assault on our democracy had ended that day," Biden said. "American democracy is under attack because the defeated former president of the United States refuses to accept the results of the 2020 election."

Polls show voters across the spectrum fretting about the health of the U.S. political system, though for a variety of reasons.

In any case, kitchen table concerns have dominated the midterms, to Republicans' benefit.

"January 6 itself is lower in the polls than maybe some people would have expected or wanted," said Conway, who ran Trump's 2016 campaign and served as a senior White House adviser. "Trying to make this election about January 6, about Trump-Trump-Trump, about just abortion, about climate change hasn't worked."

Why is the outlook so bad for Biden and his party?

The pinch at the pump and grocery store have a lot to do with it.

When Biden took office, the average nationwide gas price was about $2.40 a gallon. Texans can find gas around $3 now. But it's hard to shake painful memories of $5 gas last summer.

The Federal Reserve's antidote, hiking interest rates, also takes a huge bite out of consumer purchasing power. A 30-year fixed mortgage tops 7%, up more than 3 points since spring. That's like a 35% price increase, forcing homebuyers to downsize or defer their American dreams.

With the S&P 500 index down 22% from its 52-week high, older workers are forced to put off retirement.

"Inflation is a real problem," Obama conceded recently on the stump.

Not surprisingly, with a Democrat in the White House, Republicans poll significantly better among the 79% of voters who see the economy as the top issue in the midterms, according to a Pew Research Center survey.

Just 17% of Americans say the economy is in good or excellent shape.

That's a stiff headwind for a president's party. For Biden, a rout would hobble not only his presidency but his prospects for reelection.

In reality, the metrics are mixed. Unemployment has plummeted from 6.4% when Biden took office to 3.5%, the lowest in 50 years.

Biden has tried to direct attention to such bright spots, but hasn't gotten much traction.

"When I took office, this economy was in ruins. My predecessor was the first president since Herbert Hoover to lose jobs during his four-year presidency," he told Democrats last weekend in Philadelphia.

"10 million jobs created since I took office. A record. More jobs created at this point than any presidency in American history," he said.

True — because the pandemic had gutted the job market.

Republicans are similarly selective on gas prices. They gleefully remind voters how cheap it was to fill the tank under Trump, glossing over the reason gasoline plunged to $1.84 or so in April 2020: COVID-19 lockdown.

The current federal spending deal runs out on Dec. 16. Next July, give or take, the Treasury will exhaust its whopping $31.4 trillion credit limit, which Congress boosted by $2.5 trillion last December.

Both junctures provide leverage to Republicans.

McCarthy has already signaled his intention to wrest spending cuts from the White House.

"You can't just continue down the path to keep spending and adding to the debt," he told Punchbowl News a few weeks ago. "We'll provide you more money, but you got to change your current behavior."

Biden jumped on that as yet more evidence that "ultra-MAGA Republicans" are hell-bent on imposing their will regardless of the harm to the economy.

Republicans haven't unveiled many details about their agenda, but they've dropped hints.

That means Social Security, Medicare, Medicaid and the Affordable Care Act (Obamacare) — which combined account for nearly half the federal budget — would need reauthorization by Congress every five years.

"They will shut down the government, refuse to pay our bills, and it'll be the first time in our history America will default," Biden warned recently, "unless I yield and cut Social Security and Medicare."

Shutdowns rarely pay off politically, for either party.

The 16-day shutdown that Cruz instigated in fall 2013, hoping to derail Obamacare, cut quarterly growth nationwide by up to 0.6 percentage points, or $6 billion. Billions in tax refunds were delayed. Federal workers got paid eventually, as usual, meaning lost productivity and no actual savings for taxpayers.

"Brinkmanship is not the way to govern a country," Troy said.