Midterm elections could lead to spike of veterans in Congress, some experts say 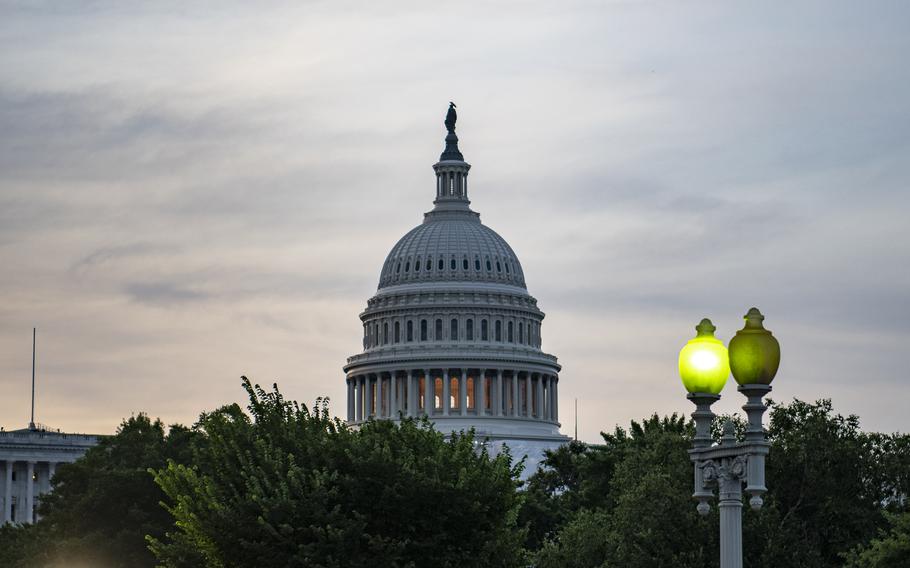 The Capitol in Washington, D.C., on July 6, 2022. (Carlos Bongioanni/Stars and Stripes)

WASHINGTON — About one in every five candidates running for office in the midterm elections are veterans, recent research shows, and some experts are expecting Tuesday will usher in the most significant increase in congressional lawmakers who served in the military in years.

There are more than 200 candidates with military experience on ballots nationwide for congressional office or governor — more than any election since 2012. About 90% of the veteran candidates are men, and nearly two-thirds are running as a Republican, according to data reviewed last month by the Pew Research Center.

Close to 100 of the veteran candidates are projected by political experts to win their races Tuesday, and several others are in races that have been deemed “toss-ups.” By comparison, there were 91 veterans at the start of the 117th Congress in 2021, which will end in early January when the winners are sworn into office.

“Tuesday’s election will likely mean several more veterans in the 118th Congress,” said Seth Lynn, a University of San Francisco adjunct professor and founder of the Veterans Campaign, a group that studies the participation and impact of veterans in public office. “This is the first significant increase in congressional military service in half a century.”

There are 185 major party nominees on the ballot Tuesday who have a military background, according to the Veterans Campaign. Of those, 123 are non-incumbents, the highest number on record.

Despite the record figures, military experience in Congress has dropped during the past 50 years.

In the late 1960s, a record 75% of all members of the House had some military background, according to the Pew Research Center. In the mid-1970s, a record 81% of U.S. senators were veterans.

For comparison, at the start of the 117th Congress in 2021, just 17% of all members in each chamber were veterans.

Experts cite a number of contributing factors for the decline of veterans in Congress, including there are simply fewer veterans since the draft ended and an all-volunteer military began in the 1970s following the Vietnam War.

“The Vietnam generation of veterans is the only veteran cohort in history that was less likely to serve in Congress than their peers who didn’t serve,” Lynn said.

Jonathan Chavez, an Air Force veteran who served in Iraq and the Republican House candidate in Georgia’s 4th District, said he thinks military representation in Congress has dwindled because of how veterans are viewed by others.

“I think it’s because of the environment we are in,” said Chavez, who is up against Rep. Hank Johnson, a Democrat incumbent. “In the last 70 years, we have seen more and more where veterans aren’t being as respected for what they can do for our country. Those are the things that we need to make sure that people understand.”

Despite most veteran candidates running as Republicans and the GOP poised to make gains in both chambers, some Democratic candidates with military experience are competing in key congressional races.

“I think the difference is, someone who swore an oath to support and defend the Constitution at 18 years old and who’s been living by that oath for the last 30 years,” Flowers said. “I think I understand what it means to serve.”

“I believe my veteran status will be significant in the race, especially considering that [areas of the district] contain a lot of veterans … and the military installation Fort Bragg has a heavy influence on those areas,” Clark said. “I think my chances of emerging victorious are reasonable, and that’s why I decided to run.”

While Republicans still account for the majority of veteran candidates for office, some experts contend there has been a change in the Democratic Party’s view of nominating veterans in recent years.

“I do think there are more veterans taking the lead in the Democratic Party when that might not have been the case in the past,” said Kyle Bibby, a Marine Corps veteran and deputy political director at Common Defense, a left-leaning, veteran-led group. “Both parties want to be able to lean into the narrative that they care about veterans and they understand national security. … I think there are more Democratic veterans that are stepping forward to run.”

Some of the GOP’s veteran candidates have played up their military background in campaign ads to appeal to traditional conservatives and more moderate voters who are concerned about national security and foreign policy. Their message is the United States has been less strong militarily since Democratic President Joe Biden took office and Democrats won a slight majority in the Senate.

Bibby cautioned, however, it should not be assumed that military veterans and Americans who support a strong military will always vote Republican.

“Younger voters are leaning a little more Democratic. You see that in the military,” he said. “Veterans of color, they are still voting overwhelmingly for Democrats. So it all teases out to be like America itself.”