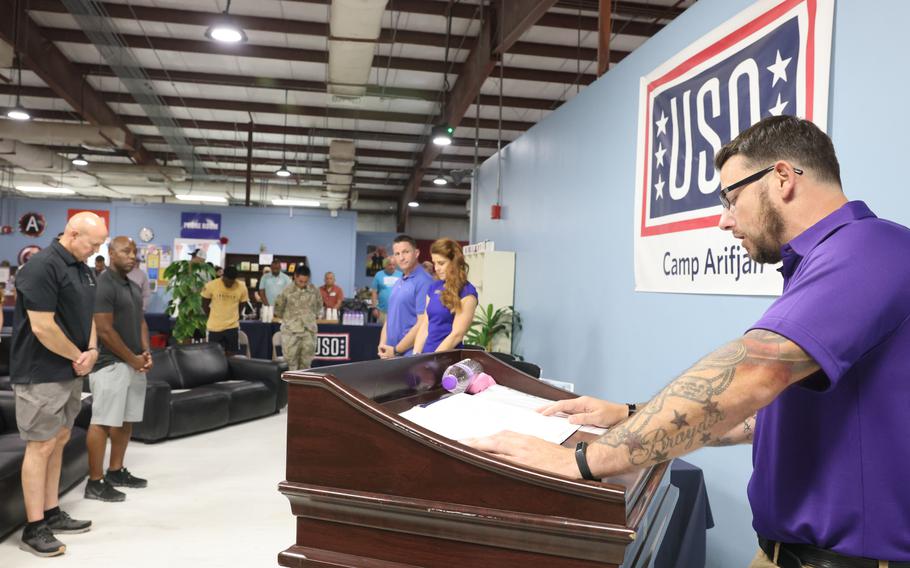 David Long, a duty manager for the USO at Camp Arifjan, Kuwait, speaks at a Purple Heart Day event at the base Aug. 7, 2022. (Claudia LaMantia/U.S. Army)

For years, David Long wished he could give back the Purple Heart he was awarded in 2006 after being wounded in Iraq.

"It was a tough journey," Long said Sunday at a Purple Heart Day ceremony at Camp Arifjan in Kuwait, as he recalled numerous medical appointments, therapy sessions and nightmares. He said he had frequently wondered why he survived while others didn't.

Long works as a duty manager for the USO at Camp Arifjan and observes Purple Heart Day annually. He raised the idea of having an event at the Kuwait installation to mark the occasion.

The Sunday ceremony is believed to be the first of its kind for the USO in the Middle East, said Casey Pizzuto, the organization’s senior manager at Camp Arifjan. It recognized Long and other Purple Heart recipients deployed to the base.

Purple Heart Day is a fairly recent creation, first observed in 2014, according to the Disabled Veterans National Foundation website. But the award itself, which is given to troops killed or injured by enemy action, is the oldest U.S. military decoration. 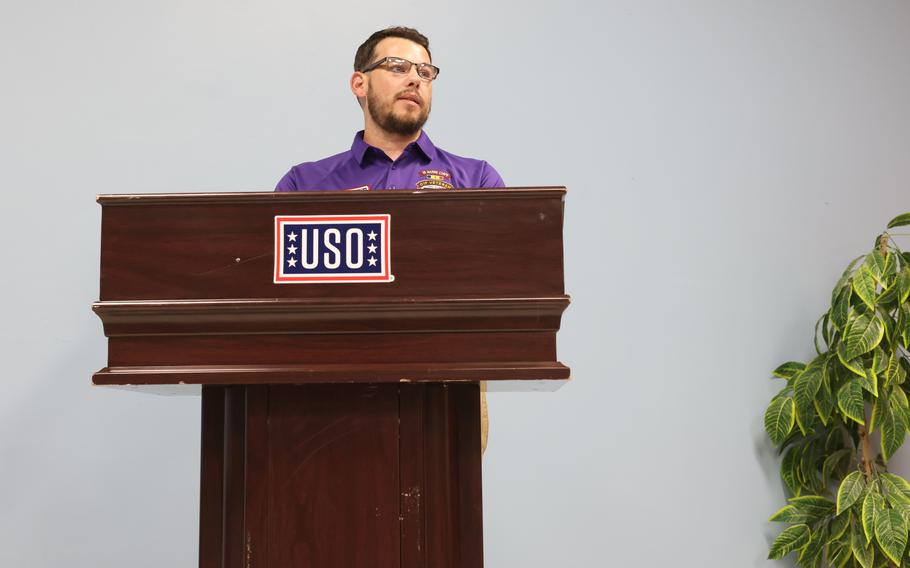 David Long, who was awarded the Purple Heart in 2006, endured years of medical appointments, therapy sessions and nightmares, he said in a speech at a Purple Heart Day event at Camp Arifjan, Kuwait, on Aug. 7, 2022. (Claudia LaMantia/U.S. Army)

Long was a member of 3rd Battalion, 8th Marines who fought in the battle of Ramadi, site of some of the deadliest fighting of the Iraq War.

He suffered from a traumatic brain injury and survivor's guilt in the years afterward. He said he found himself on the brink of suicide 11 years ago.

He struggled with the meaning of his Purple Heart, especially whenever someone would thank him for his service and then not know what to say after that.

"I fought next to men, great men who are no longer here," Long said Sunday. "They cannot be here, so why should I be 'awarded?'"

He said he finally knows how to view his Purple Heart in a way that honors those who didn't survive.

"I stand here today proud of this badge of merit," said Long. "Proud I can wear it for those men who cannot." Aug. 7 marks the day George Washington, the commander of American forces in the Revolutionary War, established what would become the Purple Heart in 1782 to recognize bravery in action.

The award would not be issued for 150 years, until the military revived it in 1932, according to the website of the National WWII Museum in New Orleans. In 1944, the military tweaked its policy on the Purple Heart to give it the purpose it has today.

"I take pride in this specific day every year," Long said. "I lost a lot of my friends. For me, more or less, I do it for them."