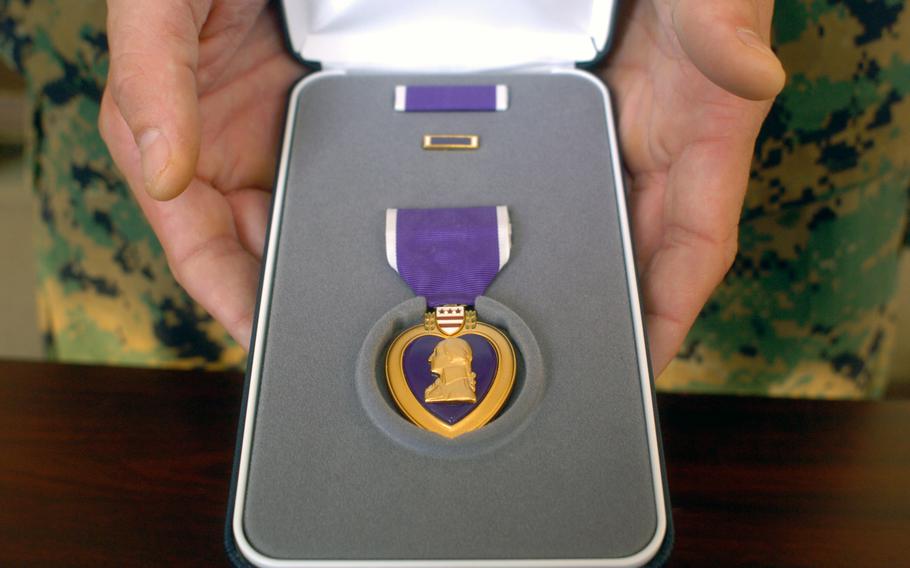 A Purple Heart is displayed. A medal was recently given to the family of a recipient, nearly eight decades after his death. (Wikimedia)

(Tribune News Service) — An official Purple Heart certificate and related documents that were found recently in the attic of a home in Buffalo, N.Y., have been returned to the relatives of a World War II serviceman who died in battle nearly 78 years ago.

During a ceremony Wednesday in Buffalo, Rep. Brian Higgins presented Alice Garbarinia, a niece of Chief Petty Officer Adam Strauch, with the artifacts, which included a letter from President Franklin D. Roosevelt and a triangular, folded American flag that had flown over the Capitol.

“We’re honored to be here to receive this. He was well remembered in my family as a hero,” said Garbarinia, who was accompanied at the naval park by her daughter Andrea.

Finding members of Strauch’s family turned out to be a team effort.

The individual who initially recovered the documents from the attic did not know to whom they should be returned and brought artifacts to Higgins’ Buffalo office instead.

“Our office began digging but needed further information to identify a next of kin. That’s when we reached out to members of this community who helped with a previous project,” Higgins said.

The staff in the congressman’s office was able to find limited information about Strauch and started putting together a family tree with the help of some local genealogists, including Diane Blaser, president of the Buffalo Irish Genealogical Society, who had previously worked on a similar project.

With their help, the mystery regarding to whom the documents should be returned was solved.

Strauch was born in Buffalo in 1901, the son of William Strauch and Mary D. Dietz, and had three sisters — Ruth, Matilda and Emma — a brother, Fred, plus a half-sister, Lillian, and a half-brother, John. He attended Public School 28 in the city.

He was employed as a fire motorman before enlisting in the Navy in 1931 and served for more than a decade. Throughout his military career, Strauch was stationed on the USS Yorktown, the USS Wasp and the USS Princeton. He achieved the rank of chief petty officer. His responsibilities as chief electrician’s mate included operating the ship’s power generating, lighting system, electrical equipment and electrical appliances.

In a statement provided by Higgins’ office, Suzann Haberer Zoltner described her uncle as truly dedicated to his country.

“After surviving the sinking of the USS Wasp, he returned to battle. He had a kind heart and affectionately sent letters and gifts home to my mother, Lillian Krinke. Having these documents is meaningful for our family,” Haberer Zoltner said.

While serving in World War II, Strauch participated in the Battle of Midway and the Battle of Leyte Gulf in the Philippines, during which the USS Princeton was attacked by a Japanese dive-bomber on Oct. 24, 1944. The bomb tore through the body of the ship, setting fires and triggering fatal explosions. Strauch was one of 108 American servicemen to perish in the attack.

In recognition of his service and ultimate sacrifice, Strauch’s family was presented with the Purple Heart in his honor.

The Purple Heart medal is awarded to a member of the U.S. Armed Forces who has been wounded or killed as a direct result of enemy action, said Higgins.

“On Saturday, we will observe National Purple Heart Day, a time to recognize the great sacrifices made by those who served this nation,” he noted.

“It was Aug. 7, 1782, when Gen. George Washington created the Badge of Military Merit, a piece of heart-shaped purple cloth embroidered with the word merit in the white thread. The award was the precursor to the modern day Purple Heart medal,” Higgins added.