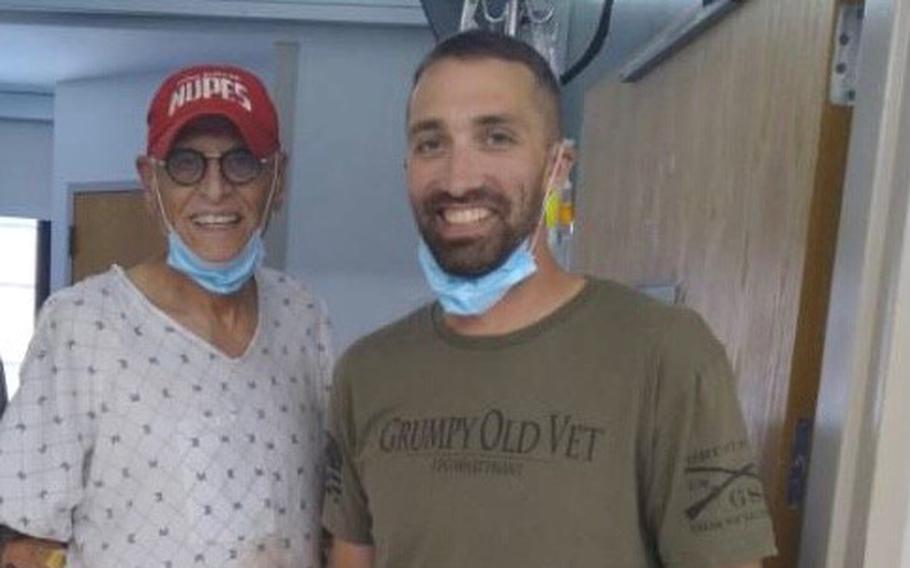 Mike Spaeth, right, donated 61% of his liver to his friend Houston Smith in June, about four months after Smith’s cancer diagnosis. The two Army veterans met each in a motorcycle club for veterans. (Photo provided by Houston Smith)

Houston Smith had never been the type to share much personal information on social media, but on March 13, the Army veteran poured his heart into a Facebook post – and it saved his life.

He described the two small cancerous tumors recently discovered through an MRI on his liver and the recommendation of his doctors was to try to find someone willing to offer up a portion of his or her liver for Smith.

“I realize this is an unconventional request. Should someone volunteer to be a living donor and meet the eligibility criteria, I would be most grateful and in their debt for their life-saving gift,” Smith, 64, wrote in a post shared with members of his motorcycle club, which is made up of military veterans and police officers. “I am aware of the great sacrifice, physically and emotionally, that would be required by the donor and his family and realize this is a very serious consideration.”

Smith, who lives in Alexandria, Va., included a link to the MedStar Georgetown University Hospital website, where prospective donors could fill out a questionnaire to determine eligibility.

More than 250 miles away in Emporium, Pa., Michael Spaeth, an Army veteran of the Iraq and Afghanistan wars, saw the post and had little hesitation to click the link and see whether he qualified as a donor. He said he had seen three friends, also members of the Nam Knights Motorcycle Club, “waste away” from cancer.

“When I first met Houston … he was full and he was healthy and I think he had hair down the middle of his back at the time,” said Spaeth, a 37-year-old father of six. “Then I hadn't seen him for a little while, because I left Virginia, and … I could see it. I could see it started. Something just clicked in my head, and I said enough is enough. I'm not watching another one go.”

After enduring a series of tests and evaluations, Dr. Juan Guerra, a transplant surgeon with MedStar Georgetown Transplant Institute, cleared Spaeth’s liver for transplant. On June 28, Guerra removed 61% of Spaeth’s liver, the right lobe, as Dr. Thomas Fishbein, the institute’s executive director, worked in an adjoining room to remove all of Smith’s cancerous liver. Once Guerra delivered Spaeth’s donation, Fishbein set to work attaching the blood vessels and bile ducts.

The procedure took about eight hours. Three months after the surgery, both men should have full-sized livers again, because the liver is the only organ that regenerates itself.

Of the roughly 8,000 liver transplants performed each year in the U.S., about 10% involve a living donor, Fishbein said. The remaining transplants involved a liver taken from a deceased patient.

“In order to get the deceased donor liver, you basically have to dwindle away and be on death's door to get to the top of the list and get an organ. So, at the time that you finally get an organ, most people who get a deceased donor are in an [intensive care unit] and extremely ill. Sometimes other organs like their kidneys are failing. The recovery is much more difficult,” Fishbein said.

In Smith’s case, he was able to get the transplant within about four months of his diagnosis, and before the cancer had truly begun to destroy his health, which has made his post-operation recovery a little easier, Fishbein said.

However, he said transplanting a liver from a living donor is a far more technically difficult surgery to perform.

More than 14,000 people are on the liver transplant list, according to Medstar. About a quarter of those on the list never receive a life-saving transplant because they become too sick, or they die waiting. Guerra said he tells his patients that they must become their own advocate and find a potential living donor.

“I think spreading the word is the key,” he said. “It’s usually harder for the one who is asking.”

While there is the potential for surgery complications or even death for the donor, Guerra said it’s a “very safe” procedure because of the strenuous evaluation process. Anyone who steps forward to try to donate, only about 25% will end up being an effective donor physically and emotionally, he said.

“We don't want to put [the donor] in any type of higher risk than what the operation has,” Guerra said.

Both veterans left the operating room with scars about 10 inches long stretched across their bellies. Spaeth spent about six days in the hospital, then another week at the home of another member of the motorcycle club in the Washington, D.C., area before returning to his wife and kids in Pennsylvania. He’s since returned to his job with the Cameron County Sheriff's Department.

Smith, formerly an agent with the Drug Enforcement Agency, has had a slower path to recovery. He used to walk about 4 to 6 miles a day. He’s built himself up to about 2 miles, though he said the summer heat is slowing him down as much as the pain.

“This was totally unexpected. For him to sacrifice for me what he did, he has no clue how grateful I am and how much I love him,” Smith said. “His wife actually sacrificed quite a bit too, and she's, I think, one of the unsung heroes in this whole story. I'm just totally grateful to both of them for doing what they did and giving me the gift of life. I can't describe it in concrete terms because the feeling is so abstract and the depths of love and joy.”

Their paths first crossed about eight years ago while Spaeth was stationed at Fort Belvoir, Va., and joined the motorcycle club. The two met at an event and have remained friends ever since.

Both men served at some point with the 3rd Infantry Division, though decades apart. Smith enlisted in the National Guard in 1982, then in the regular Army about six years later. He went back into the Reserve force and ultimately left in 2002 – about three years before Spaeth enlisted.

Spaeth served as a combat engineer and received a Purple Heart and Bronze Star before he left the Army in 2016.

In most living donor transplants at MedStar Georgetown, Fishbein said the donor and recipient know each other, though not always. He said he has seen one Secret Service agent donate to another, as well as firefighters, church members and families donate livers.

Though there isn’t a nationwide registry for people willing to donate a portion of their liver, as there is for kidney or bone marrow donations, Fishbein also sees strangers helping strangers. They are referred to as an “altruistic donor,” and that pool of people is growing fast, he said.

Liver matchmaking hinges strongly on the anatomy of the ducts and vessels, he said. Other types of donations, such as bone marrow, rely on age and ancestry.

Most hospitals that perform the surgery, including Medstar Georgetown, have a list of willing altruistic donors who they are continuously working to match to a patient in need.

“We're getting the word out that you can do this, you can save somebody's life without having to be genetically related to them as a family and more and more people are doing that now,” he said.

Spaeth said he’s often asked why he did this for his friend. Why did he put himself at risk and take the time away from his own life to give to Smith in this way?

For more information about becoming a living organ donor or transplant, visit MedStarGeorgetown.org/Transplant.